Male and Female White-crowned Pigeons, perhaps the most attractive elegant of the Pigeons: 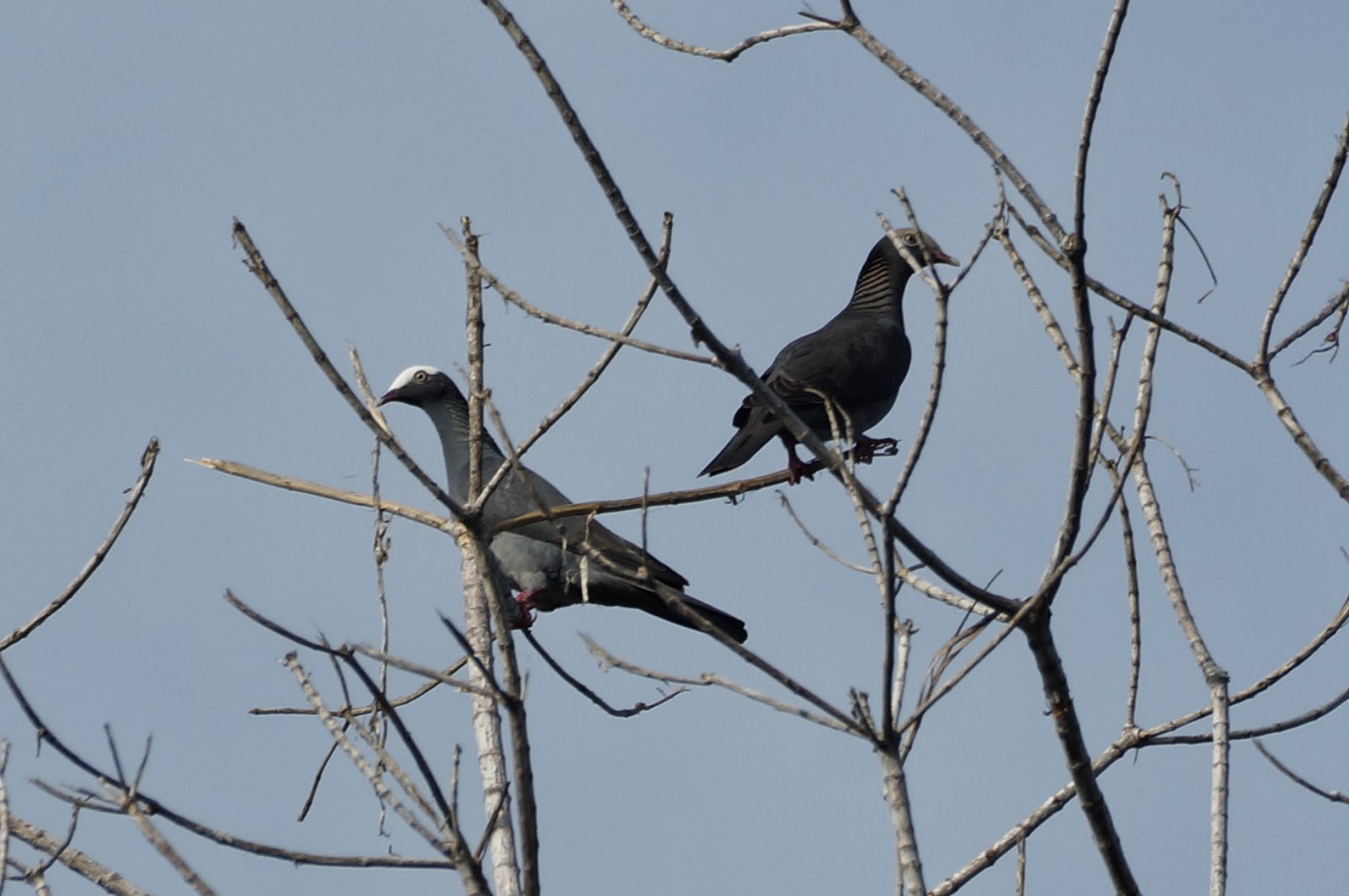 It's not always about the birds, some frogs are pretty nifty too: 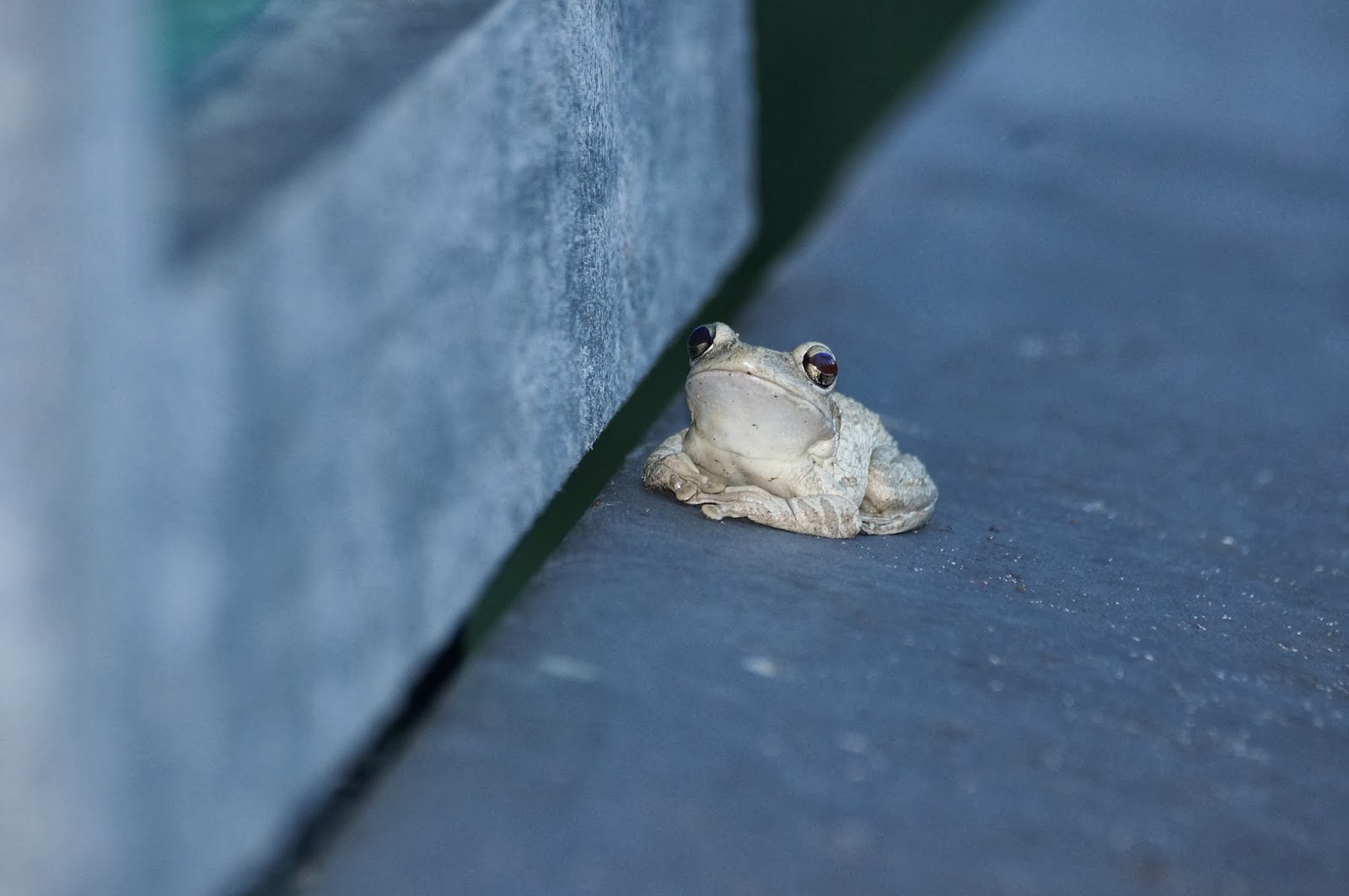 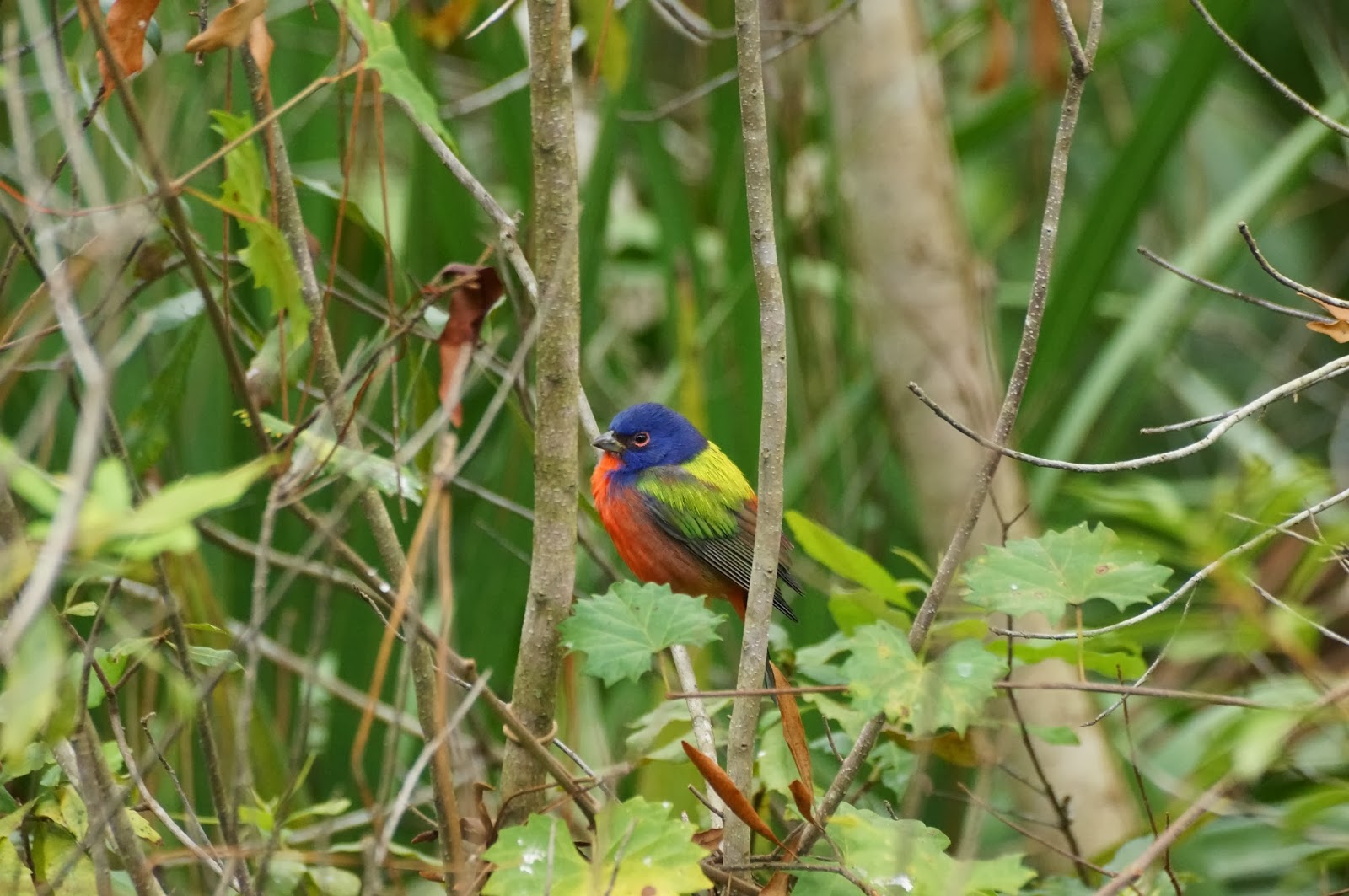 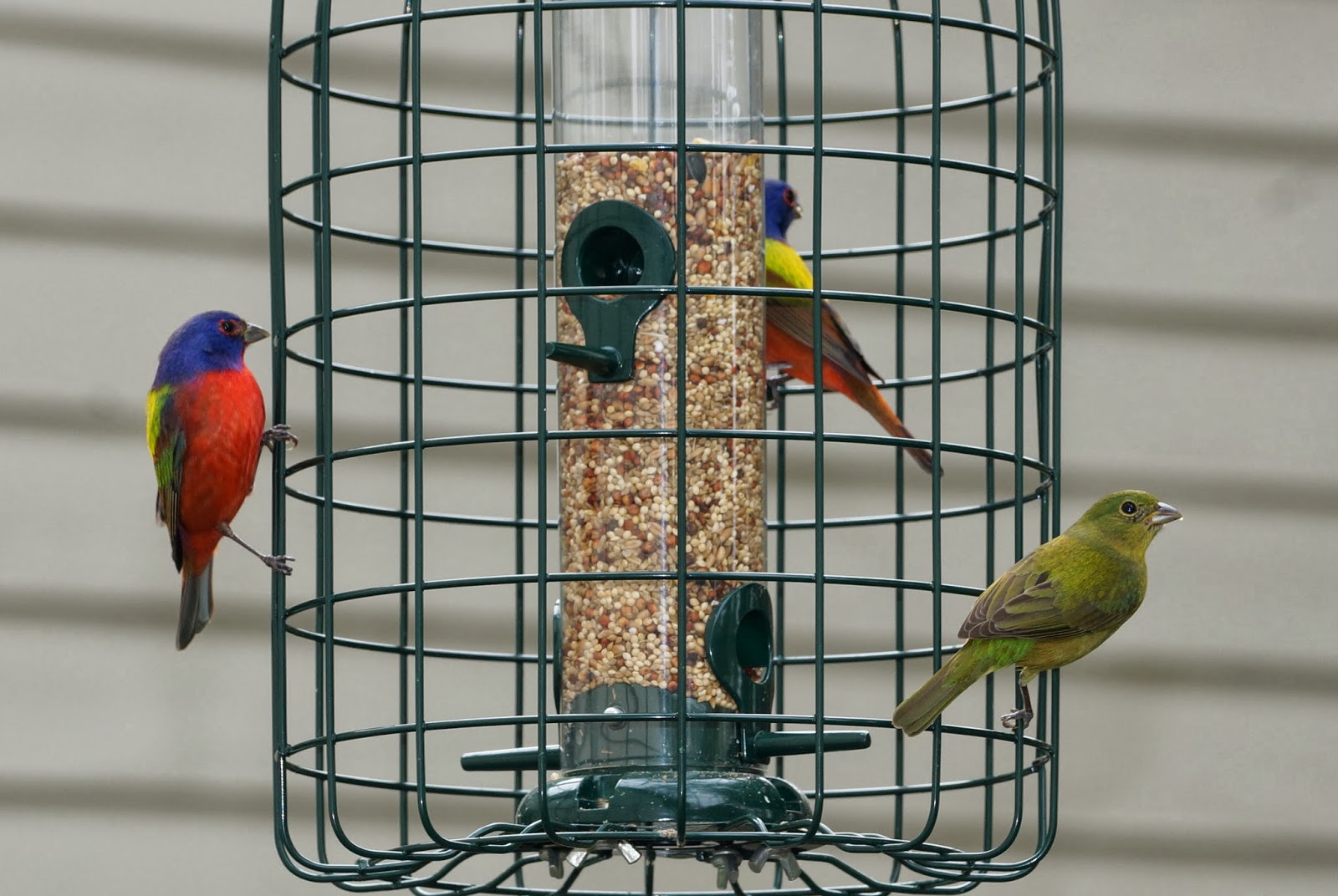 A far off course Eurasian Wigeon on the Gulf Coast of Florida: 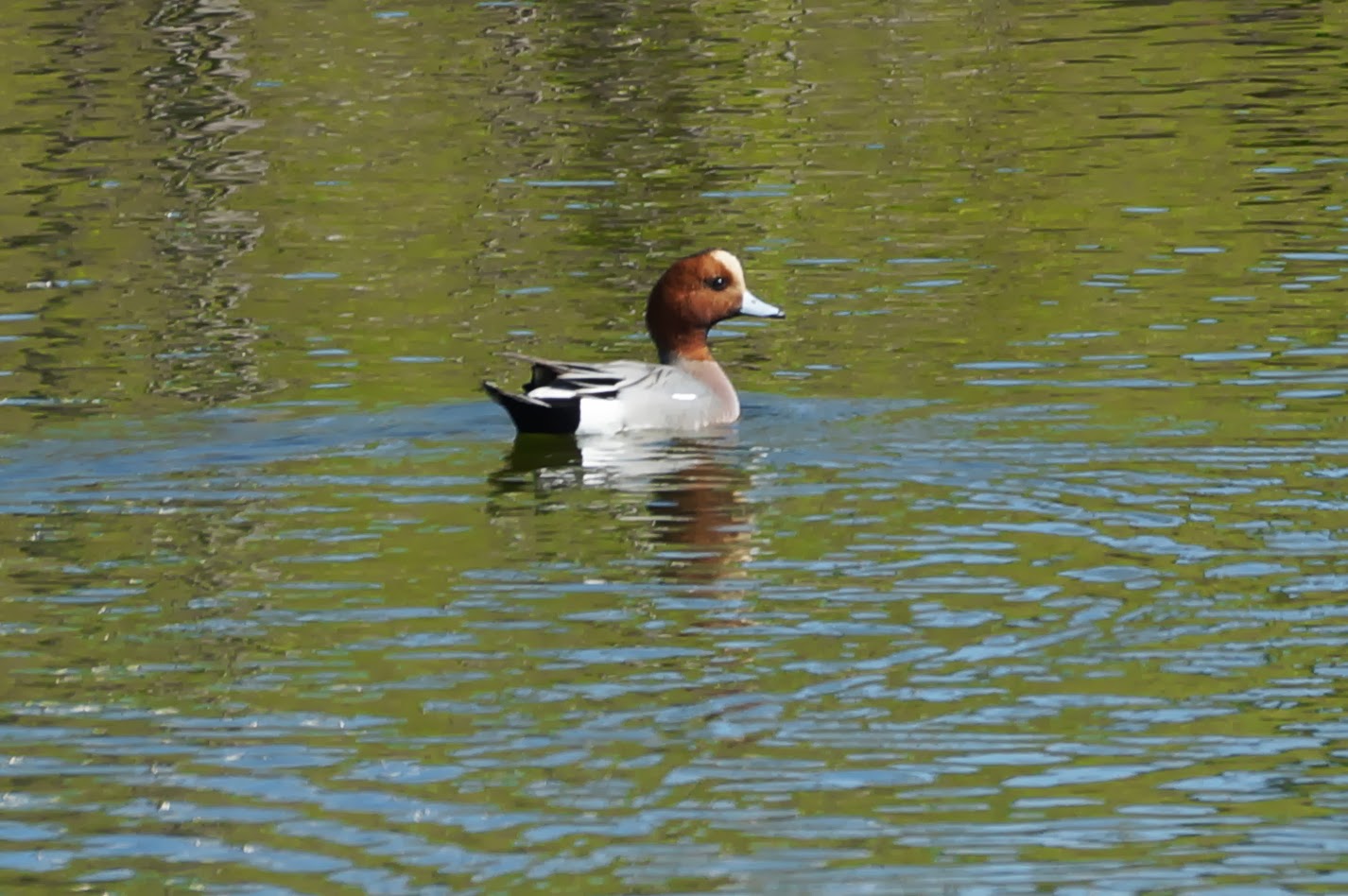 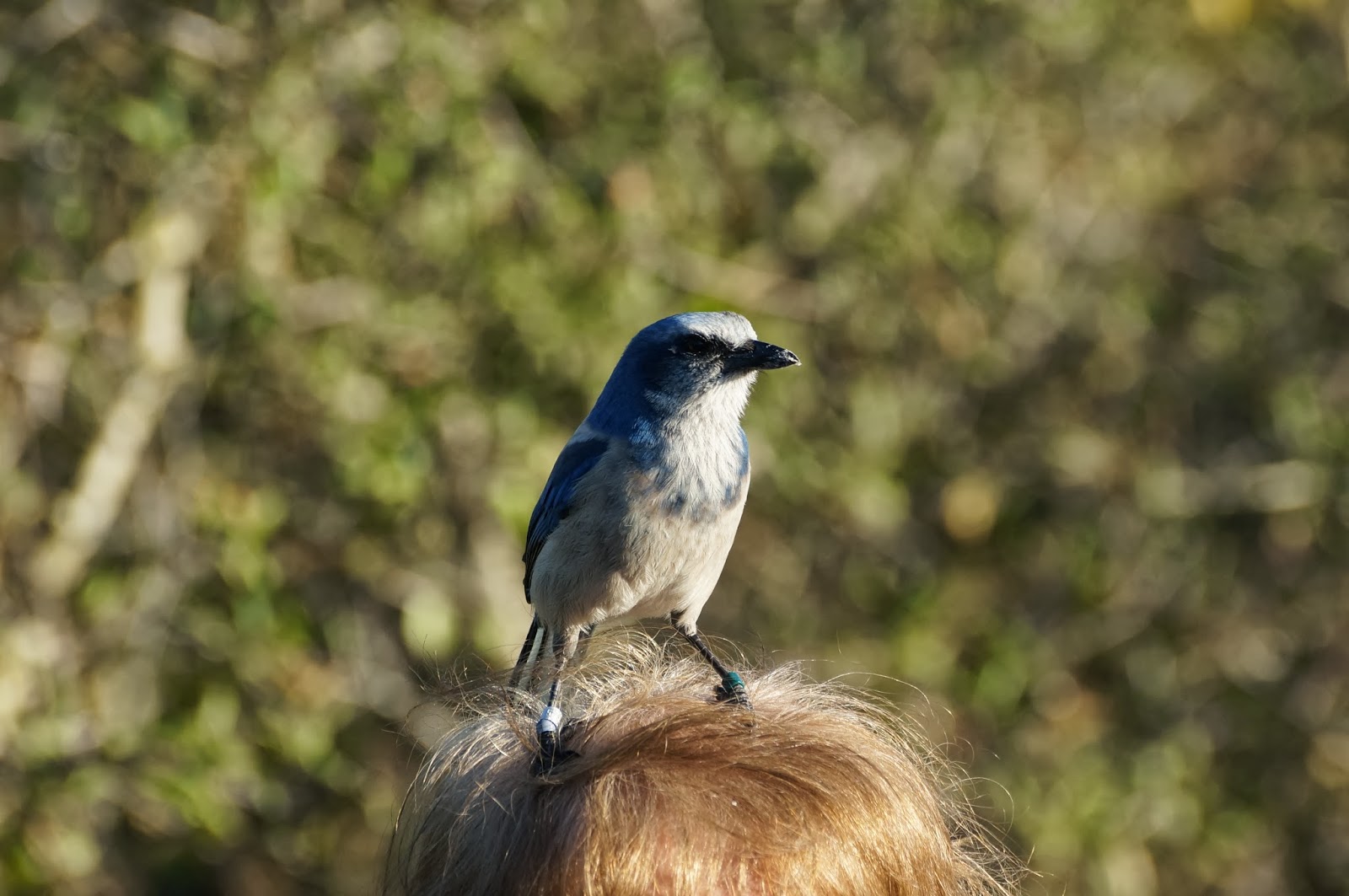 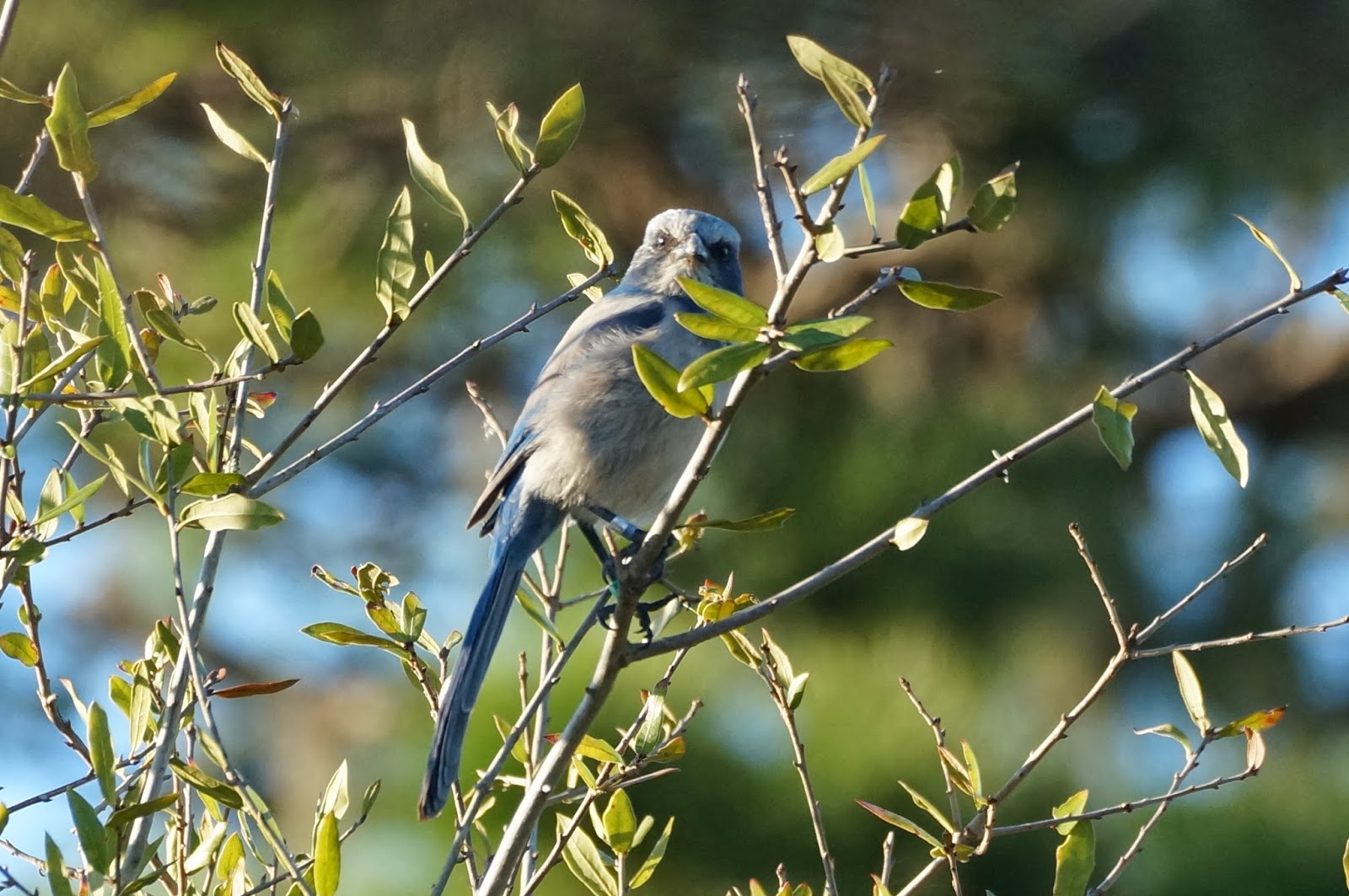 Just why did the Coots cross the rutted road? 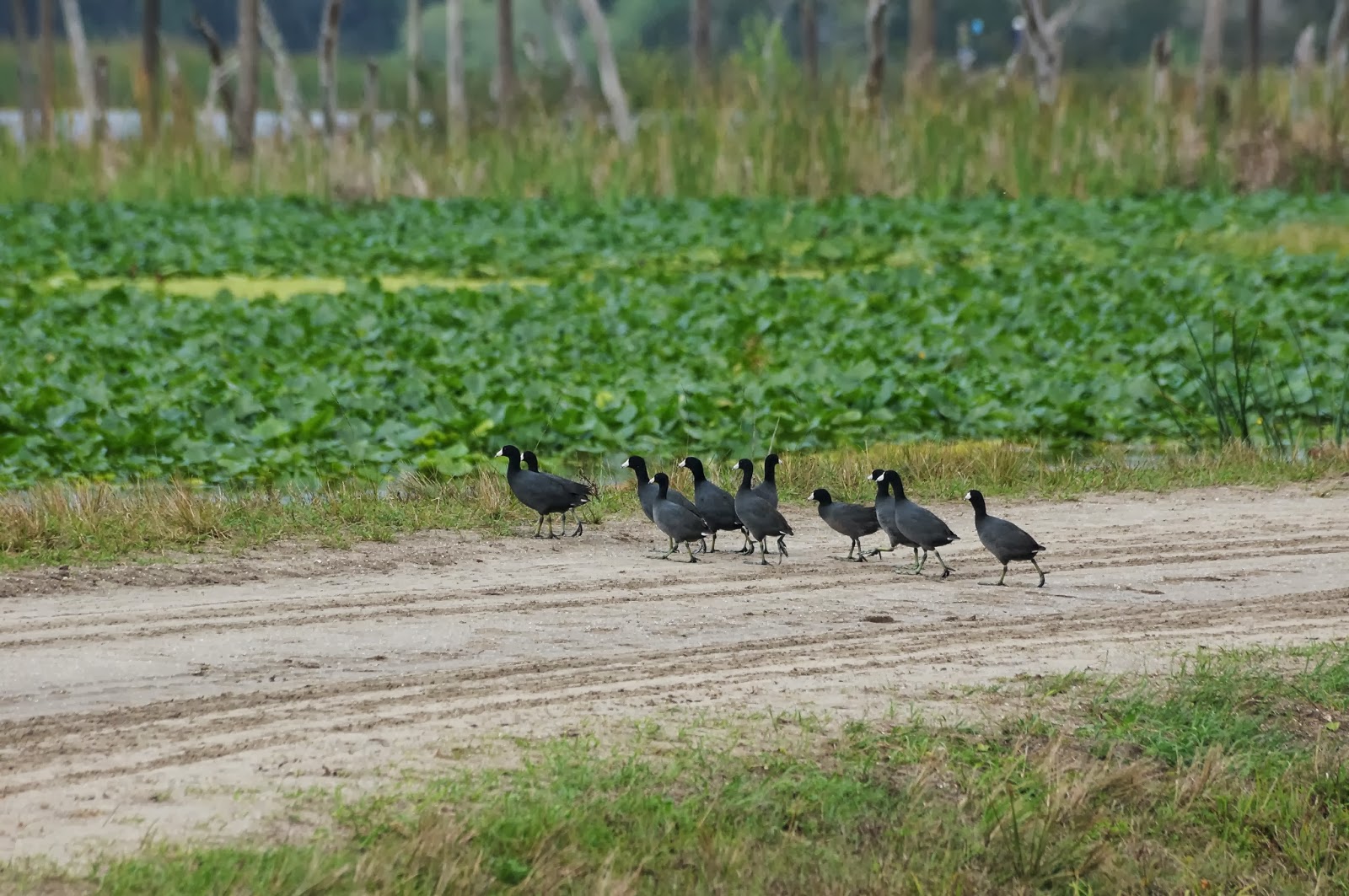 A mixed marriage made in some crazy Darwinian alternative universe: 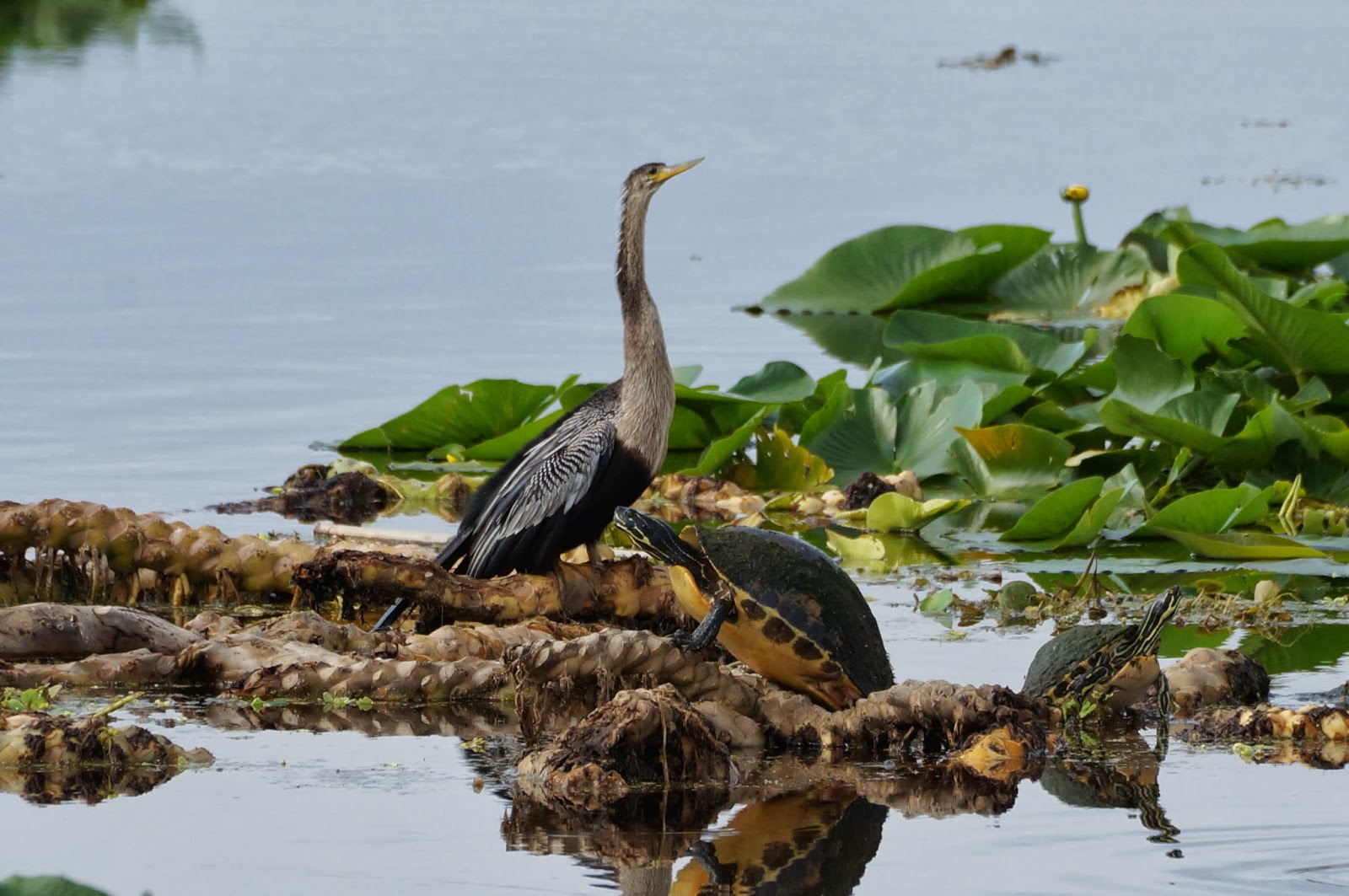 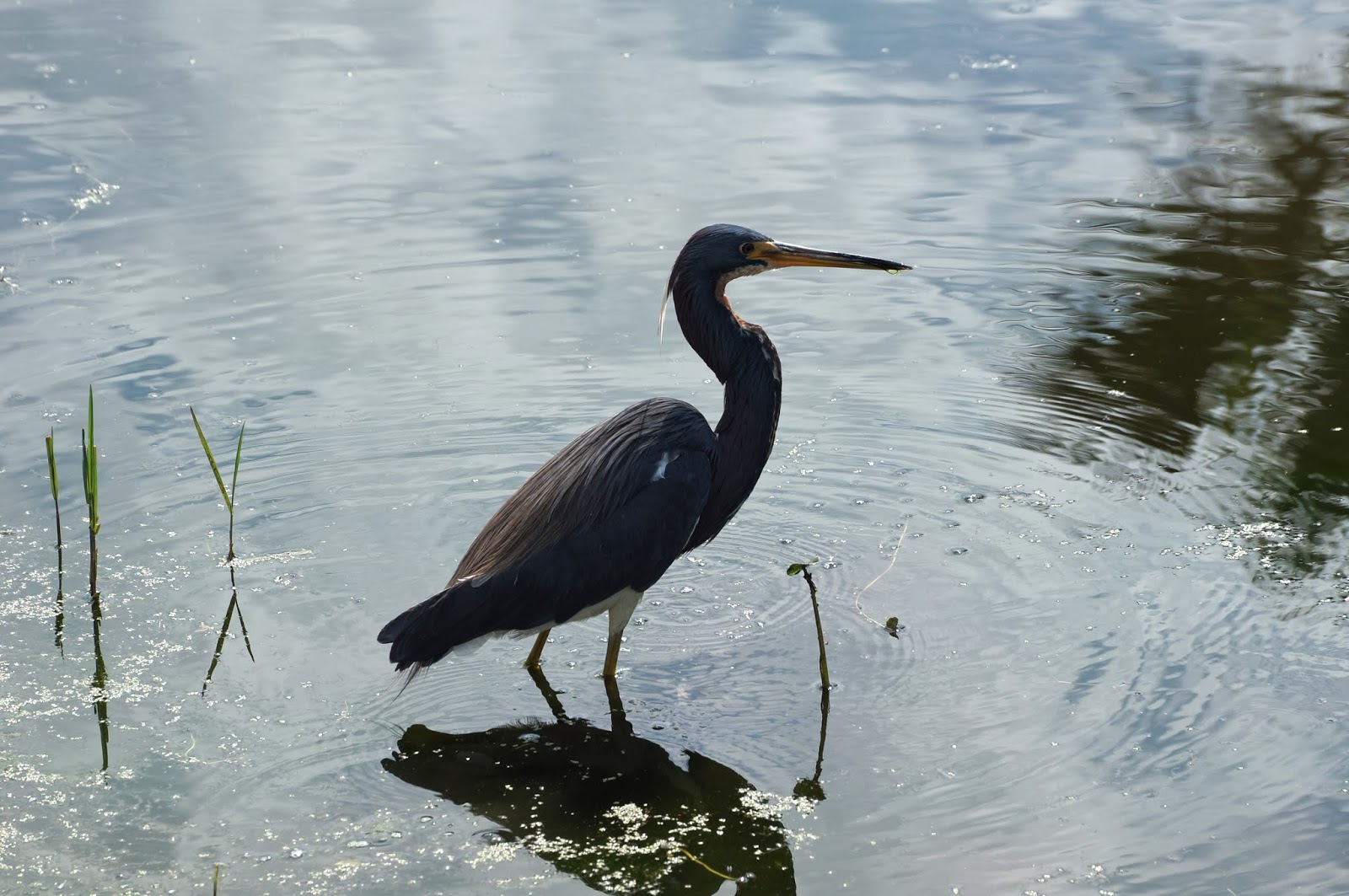 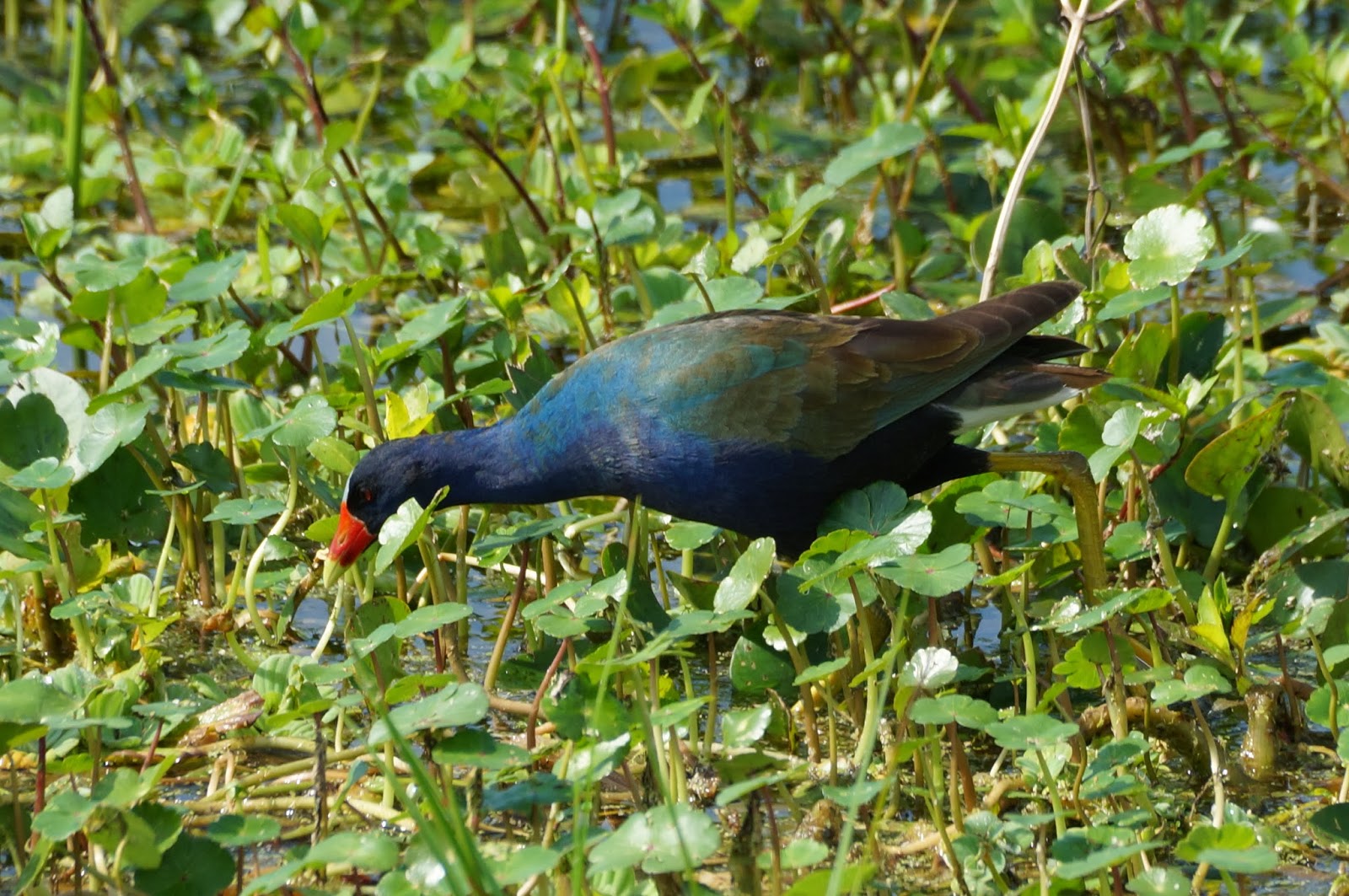 These guys go everywhere together: 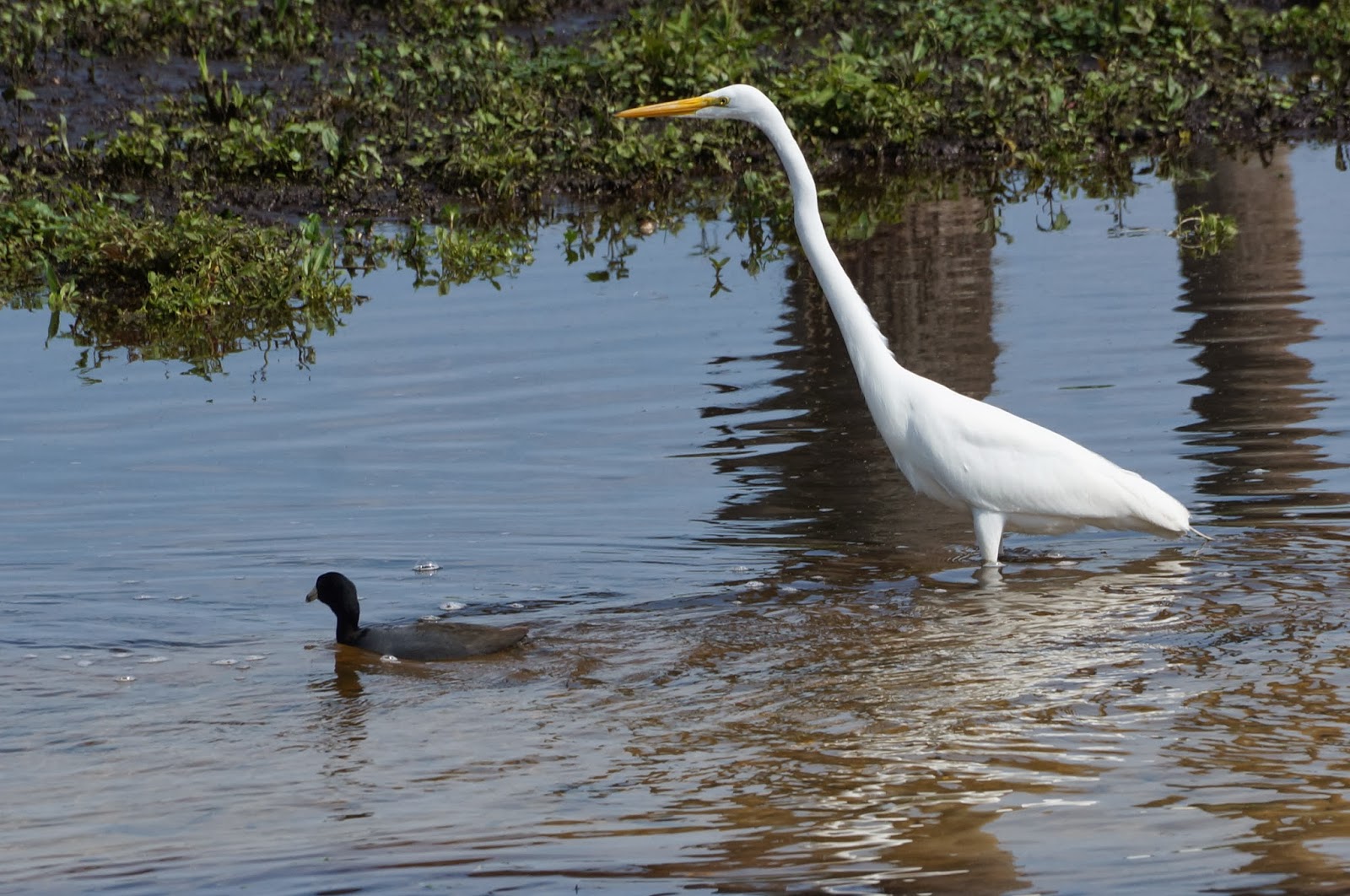 I don't often see Bald Eagles lounging in the fields, though I have seen them on mud flats in Alaska: 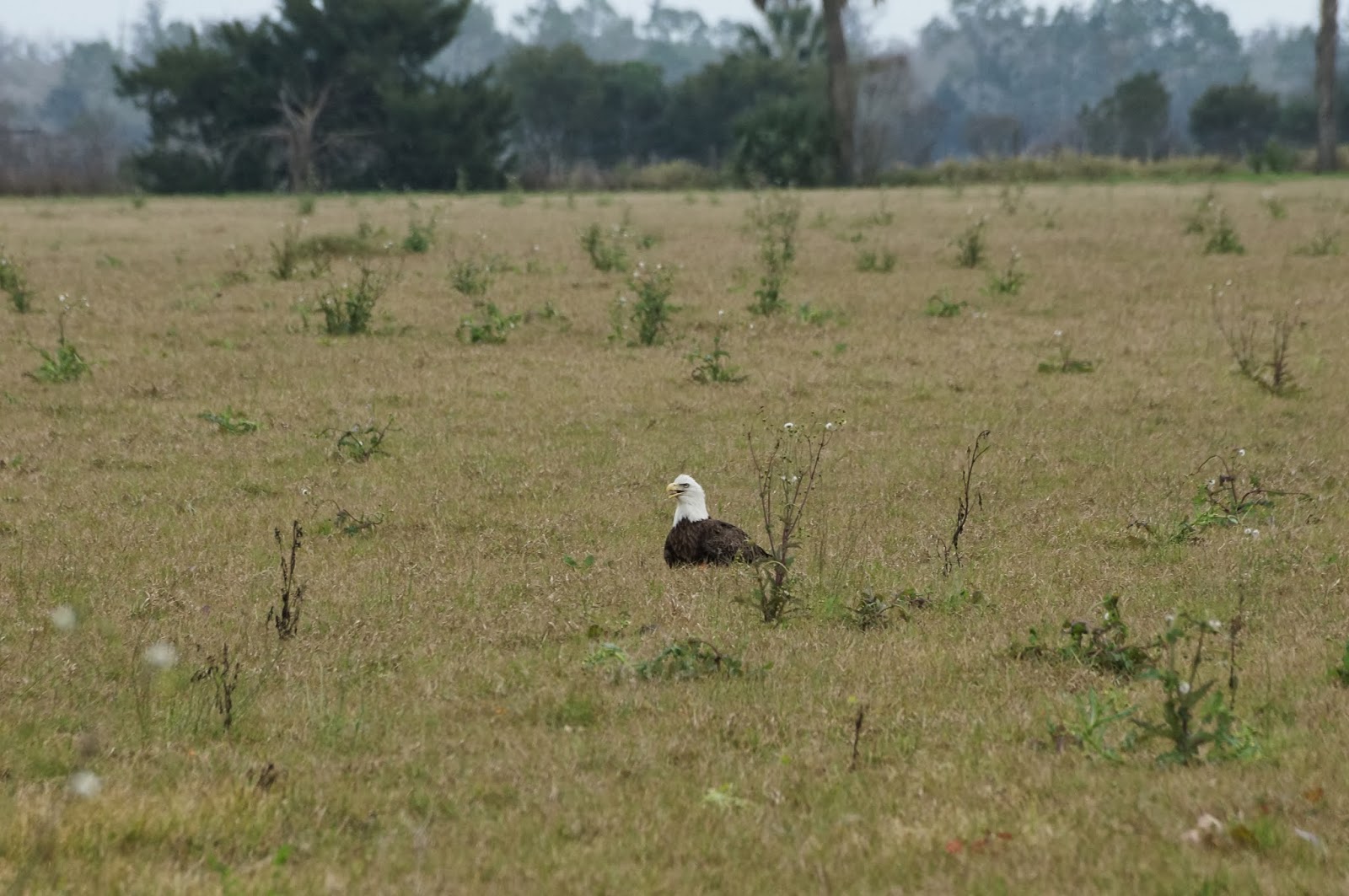 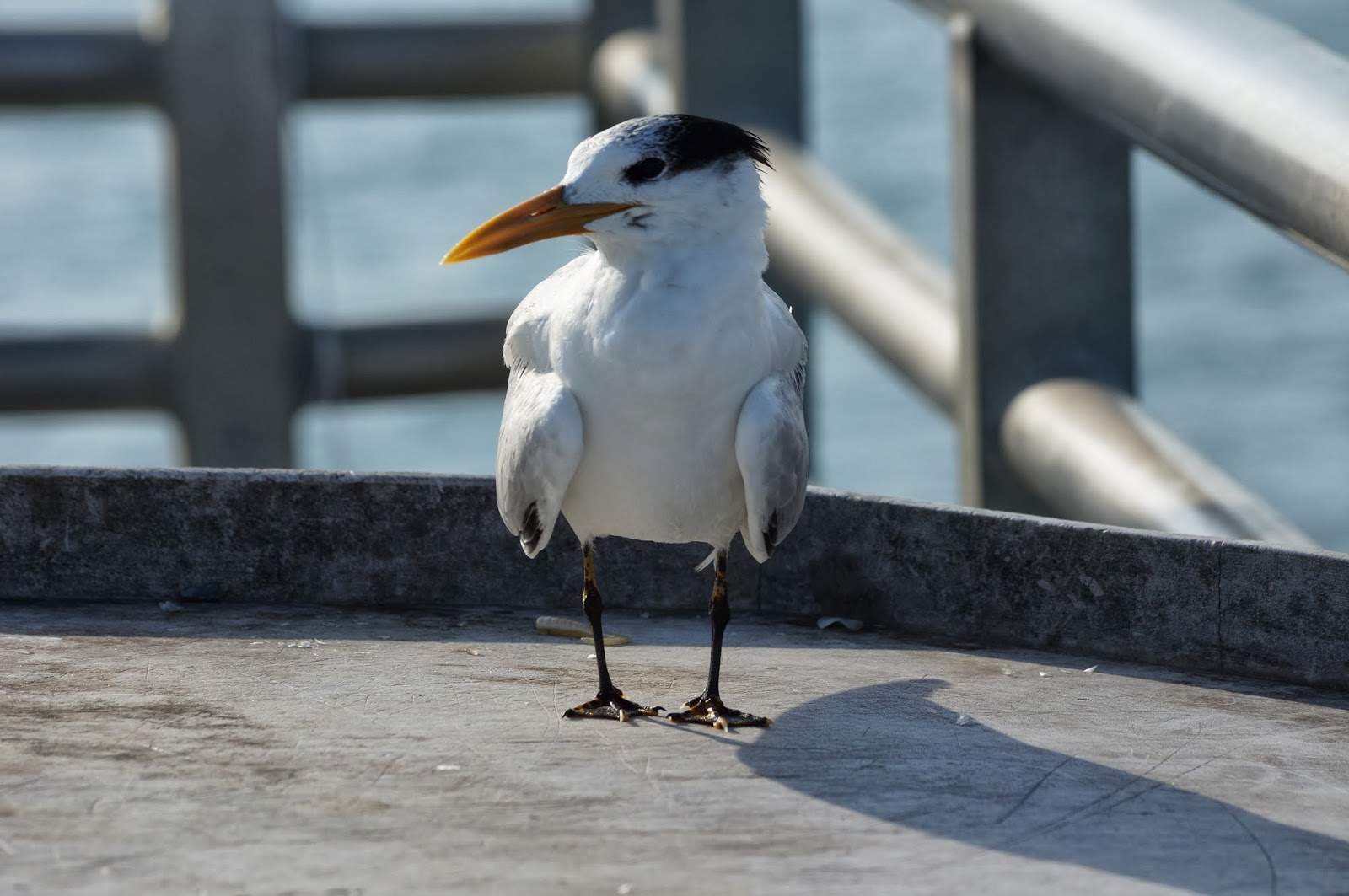 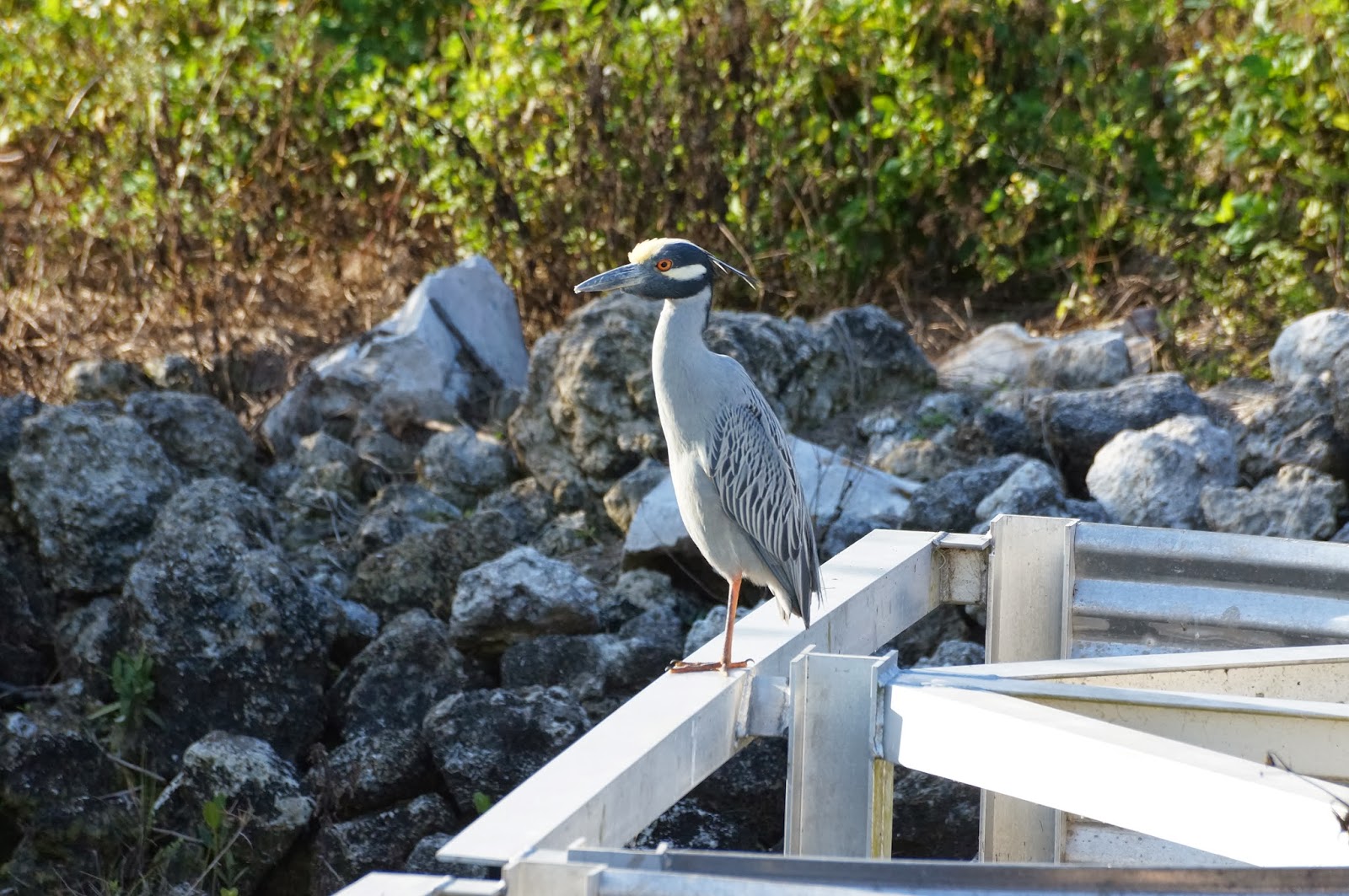 Which is a good thing.  I have been to Florida, back home and again in Florida and have seen a lot of new species over the past three weeks.  I did add one bird to the Life List, a Bar-tailed Godwit at Fred Howard Park in Tarpon Springs, and added the Eurasian Wigeon, Hooded Merganser and Cassin's Kingbird to my Florida Life List, which now is up to 218 species.  I saw the La Sagra's Flycatcher for the second time in three years, and the beautiful Painted Bunting at the feeders at Corkscrew Swamp and a second and better look at the Vermillion Flycatcher at the Orlando Wetlands.

Here is my list of new birds for 2014 since my last blog entry:

Back to Reality Birding

And reality is covered in snow and cold.  After leaving the humidity of the Osa Peninsula after the chill of the mountains up at Saverge, and the beauty of the gardens at Hotel Bougainvillea, I am home in Toronto and it's back to the northern birds, the first of which was my first American Goldfinch of the year.  A sure sign spring is around the corner.  Of course, with all the snow and the cold temperatures, it sure doesn't feel like spring is coming any time soon.

Prior to heading out to look for Short-eared Owls up in Stony Creek, the other day, I heard that there was a sighting of a female Varied Thrush up at Guelph Lake Conservation Area.  It's not a bird you see every year, and certainly not often in the east.  It is a western bird, and a rare visitor to the east in the winter.  So I headed up for the Thrush and arrived just on time to see it, as it grabbed crab apples and vanished deep into the thicket, only to reappear every 10 minutes or so.

A number of birders were present, including Jean Iron, who got a great photo through her scope.  I shouldn't have left mine in the car, as my photos were not that spectacular.  Though this is the closest look I've had of a Varied Thrush.  I had seen one on two occasions in 2012.  The first was in California, through a scope at about 100 yards, and the second was way up in a tree in Alaska.  This one did give very good binocular views in the time I was there, even if I didn't get a great photo.

I couldn't stay too late, as I had a date with a Short-eared Owl up in Stony Creek.  I had visited the spot a few weeks ago, but didn't see the owls, so I figured I'd give it another go, as it might be my last chance this winter to see one, what with all the travel to Florida coming up.  I got there just before dusk, waited until it was nearly dark and was rewarded with one Short-eared owl flying by and landing on a telephone pole before it was too dark to see it.  As I walked toward it to try and get close enough for the flash to have any kind of effect, a car drove by and the bird flew off into a field and was gone. 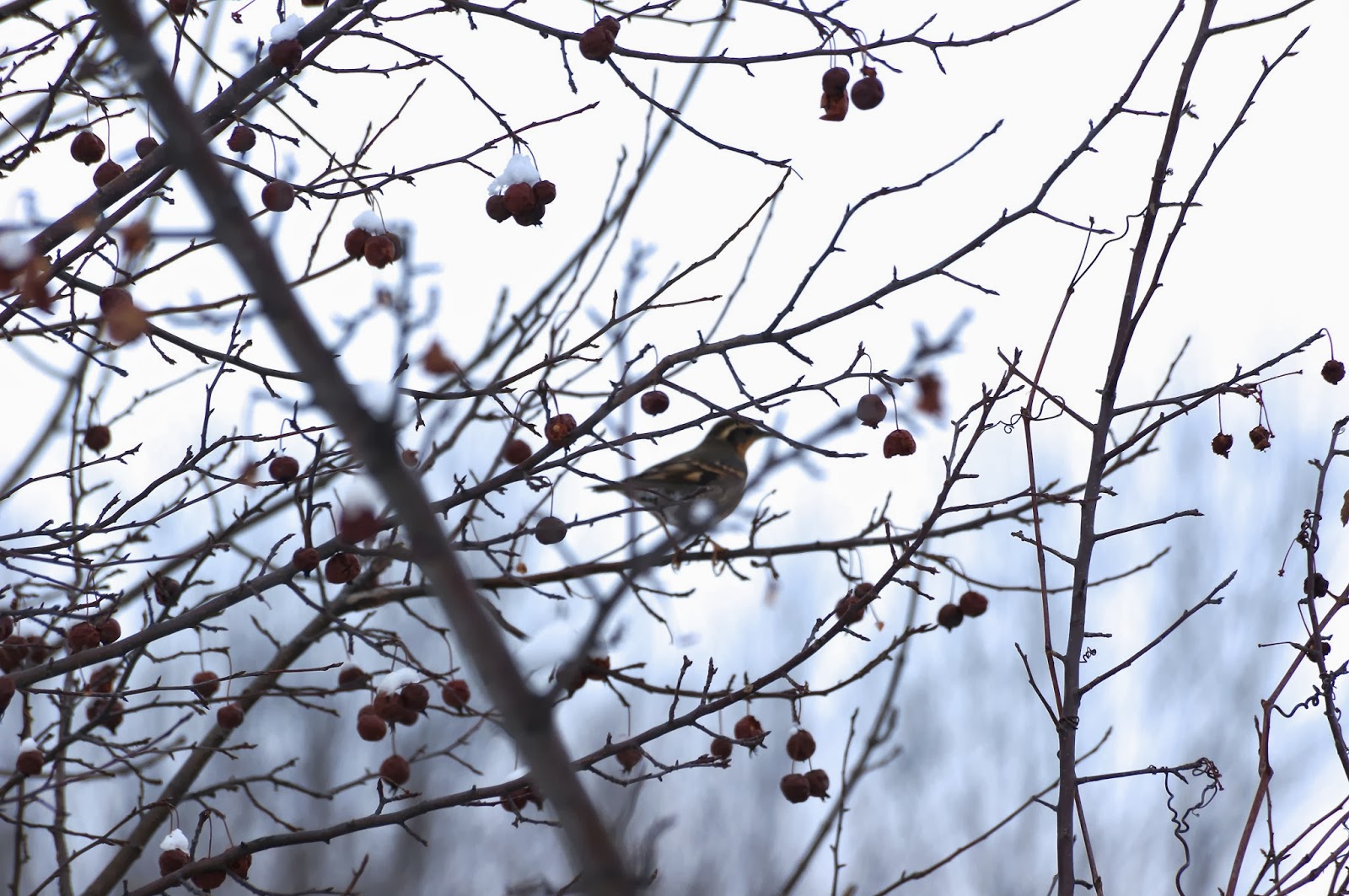 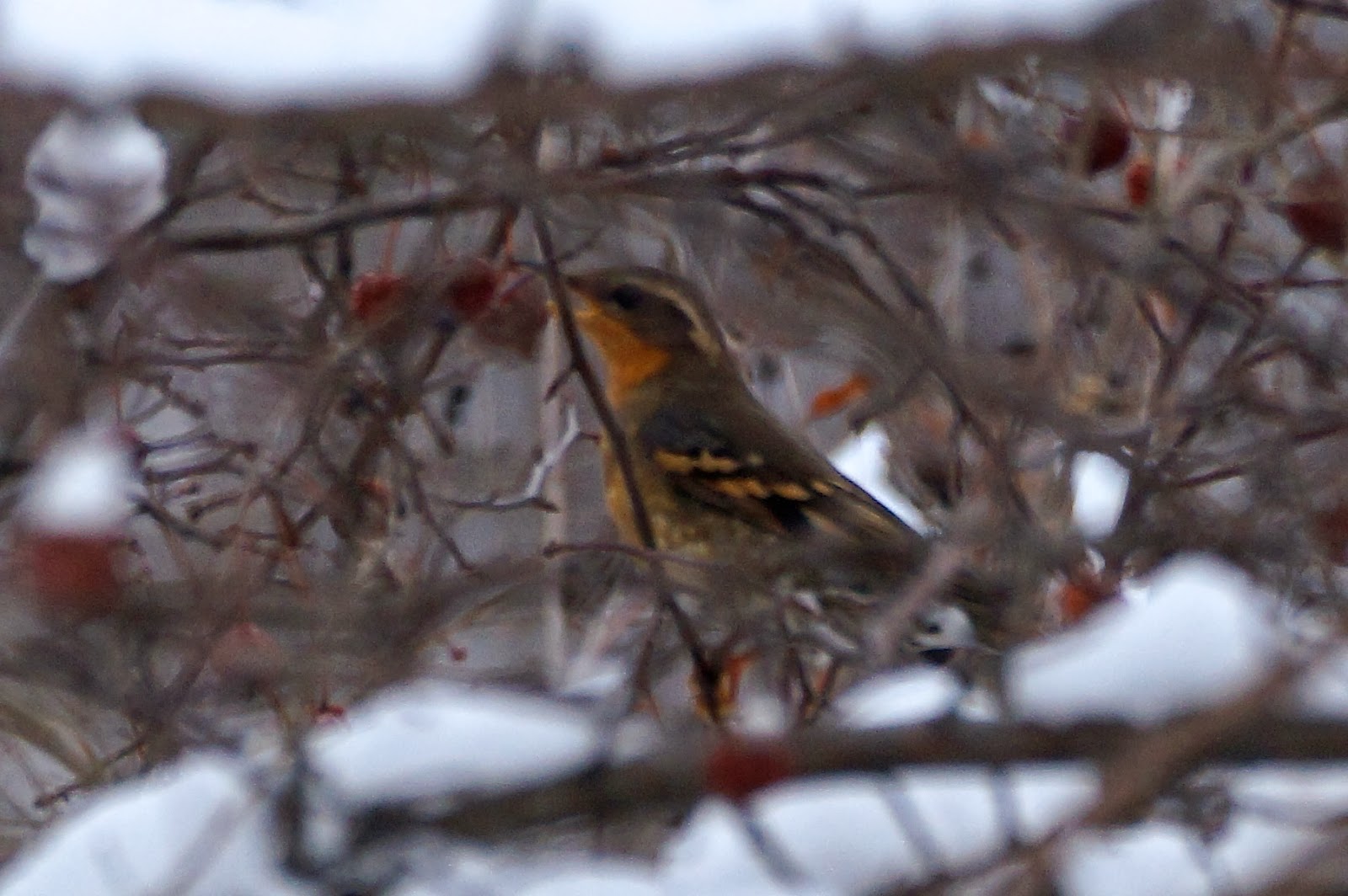 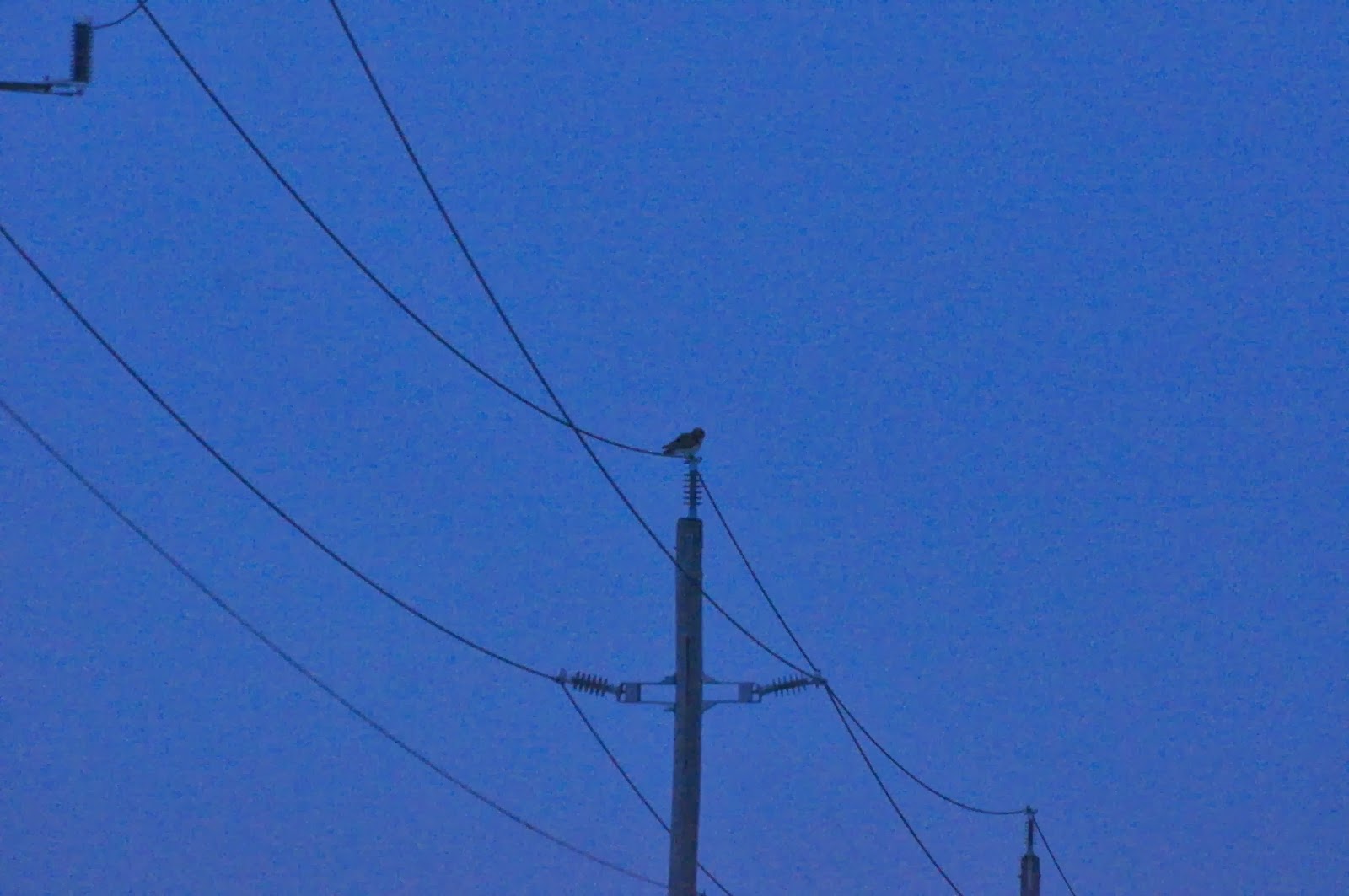 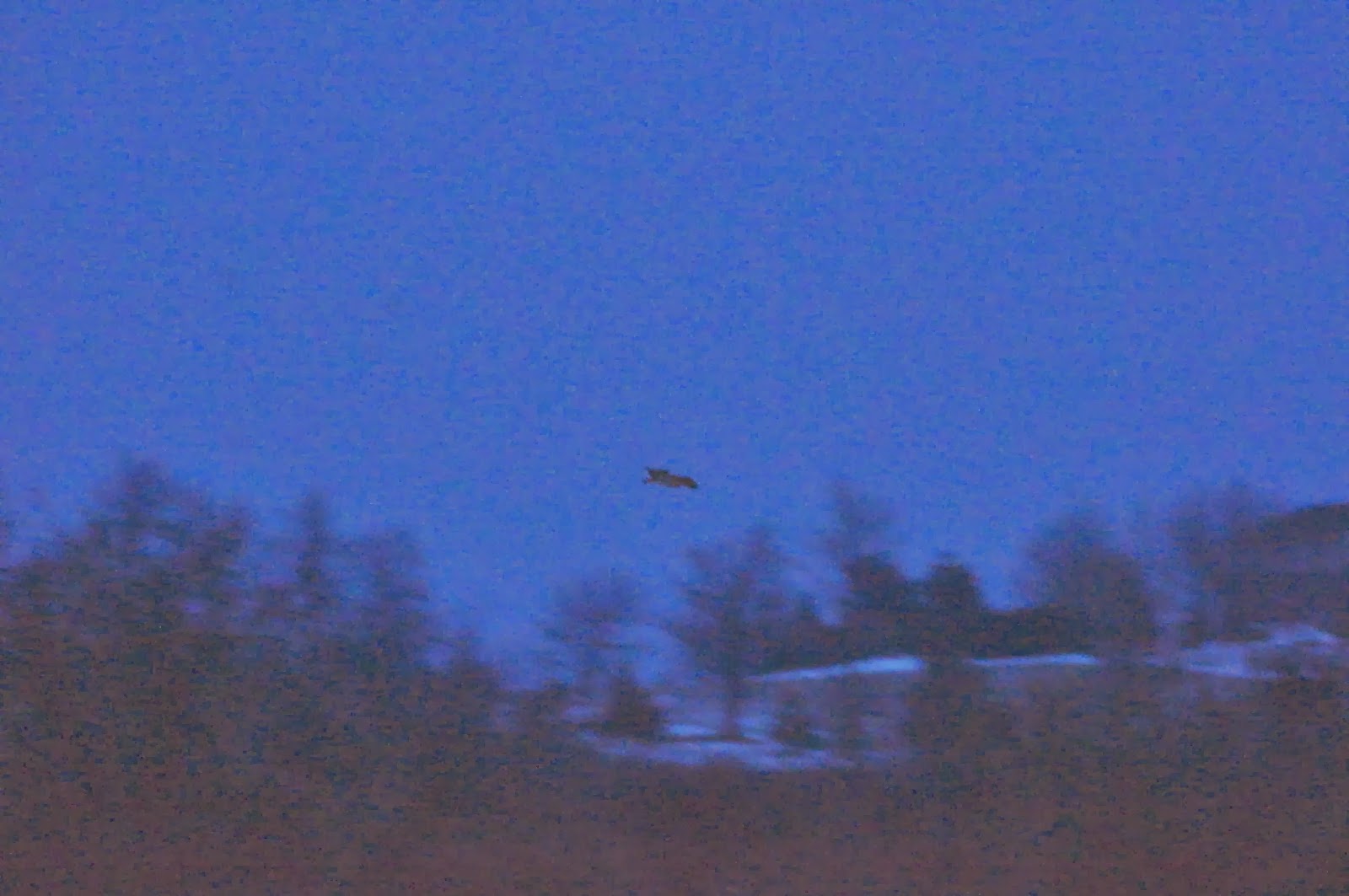 After a quick plane trip and bumpy private van ride to the Hotel Bougainvillea, it wasn’t long after checking in and eating lunch that we were out in their beautiful gardens looking to add some new birds to our growing Costa Rica and Life Lists before sunset.  The goal of the afternoon was to find their star, resident Blue-crowned Motmot.  We had heard it calling in Playa Nicuesa, but the Motmot is a bird you really want to see.

Before we had even figured out where to look for the Motmot, we had already seen a Golden-bellied Flycatcher and Giant Cowbird, along with a plethora of Blue-gray Tanagers.  I decided to ask the gardener if he knew where to look for the bird, and though he didn’t speak english, taking out the field guide broke the language barrier.  He knew exactly why I had pulled it out and directed us to a back corner.  Along the way I bumped into another hotel employee, who’s english was a little better and would later be our waiter for dinner, and he gave more specific directions to the citrus and banana trees.

Shortly after finding a Variegated Squirrel, we found a Squirrel Cuckoo and while Sue was off looking for the Motmot and other assorted birds, I found myself a Melodious Blackbird.  Upon returning to the citrus area to inform Sue of my find, she was waving me over.  She had just seen and barely photographed the target bird.  But when I arrived it was gone.  We continued walking and looking and when we returned to the spot Sue had seen it in, a woman was walking down a garden stairway and asked us if we had seen that unusual bird.  Where, what? I asked.  She replied that it was some sort of Costa Rican Blue Jay.

I figured she meant the Motmot and I asked her if she’d mind showing us.  She took us back up the stairway to a spot behind and where Sue had seen it earlier and pointed into the trees.  Sue found it quickly but the second I looked to where it was, it dropped down into a the thick branches and was gone for the night.  I still had one more day for my look, but it was going to be tough, as we were leaving early the next morning for our day trip to La Selva Biological Station.  Gustavo, our guide back at Playa Nicuesa, had suggested it as the best place close to our hotel to spend a day birding.

We were up at 5am for a 5:30 private bus ride to La Selva and were seeing birds quickly upon our arrival, including the northern version of the Cherrie’s Tanager, the Passerini’s Tanager.  After accidentally stealing a quick breakfast,(we thought we could pay after, but it actually is part of a pre-purchased meal plan-and we were let off the hook after confessing of dastardly theft), we met up with our park guides, Joe and his apprentice Juan.  Along with a few others we were guided around the park and Joe’s 15 years of birding paid off with some amazing birds he seemingly spotted out of nowhere.

There was the Black-throated Wren and the Red-throated Ant Tanager.  He got us great looks at a Blue-chested Hummingbird and my Texas nemesis, the Red-billed Pigeon.  The best part was that his scope eyepiece was an exact fit for my new PhoneSkope digi-scoping adaptor I had received in the mail the day before our trip began.  It fits on my iPhone and I was able to get great photos that my 300mm lens would not have taken.

Along the way we saw Howler Monkeys and Two-toed Sloths,(a personal favorite of Sue’s), and more birds that we could keep up with, including, not just one, but a flock of Collared Aracaris.  One of the the few birds we missed seeing at Play Nicuesa was the Fiery-billed Aracari, so it was a thrill to see at least one of he Aracaris in Costa Rica.

Later we had a flurry of bird activity in just two trees, where, almost faster than we could keep up, we saw White-ruffed Manakin, Golden-winged Warbler and Olive-backed Euphonia.  Near the end of our walk, while Sue was enjoying looks at Wild Boar, I got to see a Bat Falcon fly over, not once, but twice, and a Buff-rumped Warbler, a bird we were too tired to hike to the previous day, when looking for the Fiery-billed Aracari.

The prize bird of the day came pretty much at the end of our walk.  As we were approaching a bride, two birds flushed.  Joe, in a hushed shout, requested that everyone stay still.  We all stopped in our tracks and down in the creek he pointed out the Sunbittern.  Not just a beautiful bird, but one I had hoped to see before we left for Costa Rica, while flipping through the field guide.  In fact, Joe told us, it was the bird most people covent seeing when coming to La Selva, but is rarely seen.  We added 22 new species to our Costa Rica list on the hike but were not able to stay and hike on our own, as that privilege is reserved for those staying overnight.

On our way back to the hotel our driver took us for an unscheduled hike down to a very unusual river.  The location is the junction of two rivers, one of which flows from a volcano.  The river on the right runs clear, as you might expect, but the one on the left is a reddish brown.  At the point we hiked to, the rivers meet and mix and flow on together.   If you have seen the movie Congo, you might recognize this location.  I need to rent it again.

Once back at the hotel, I was on one last mission to see and photograph the Blue-crowned Motmot.  Sue did not want to stalk this bird with me, so she went off on her own and while I was being continually frustrated by the lack of blue crown or Motmot, she spotted three additional birds, including a very cool Rufous-naped Wren.  I took a break from the Motmot and tried to find it as well, but other than an occasional call could not locate this bird either.  No matter, as during the search for the wren we found two more new birds, a couple of Pale-vented Thrushes and the aptly named Boat-billed Flycatcher, which is very similar to the Great Kiskadee, except for browner wings and a bill you could go fishing in.

So, as the sun was setting on our Costa Rican birding adventure, I made one last “Hail-Mary” attempt to find the Motmot.  As I returned to the spot it has previously been seen, a blue-green blur passed in front of my eyes.  I watched it vanish into the branches and slowly stalked my way close.  And there it was.  The Blue-crowned Motmot.  It was nestled into the bushes and I was able to get close enough to take a few nice photos.

I walked around looking for Sue, to see if she wanted a good look, but couldn’t find her, so returned to the Motmot spot to see if she was there looking for me.  And now the bird was right out in the open.  Sitting on a branch, having a snooze on a branch right next to the path.  I snapped a few more photos and went off again to fetch Sue and anyone else who might want to see the bird, hoping it would still be there when we returned.  I found Sue and a couple of other birders and brought them to the bird.  It was still there and over the next 10 minutes more people began to gather.  The Motmot flew into a tree right into the centre of the garden and everyone enjoyed an amazing look at one of Costa Rica’s most beautiful birds.

Here are some photos from the end of the trip, starting with the star of our last day in Costa Rica, the star bird at the Hotel Bougainvillea: 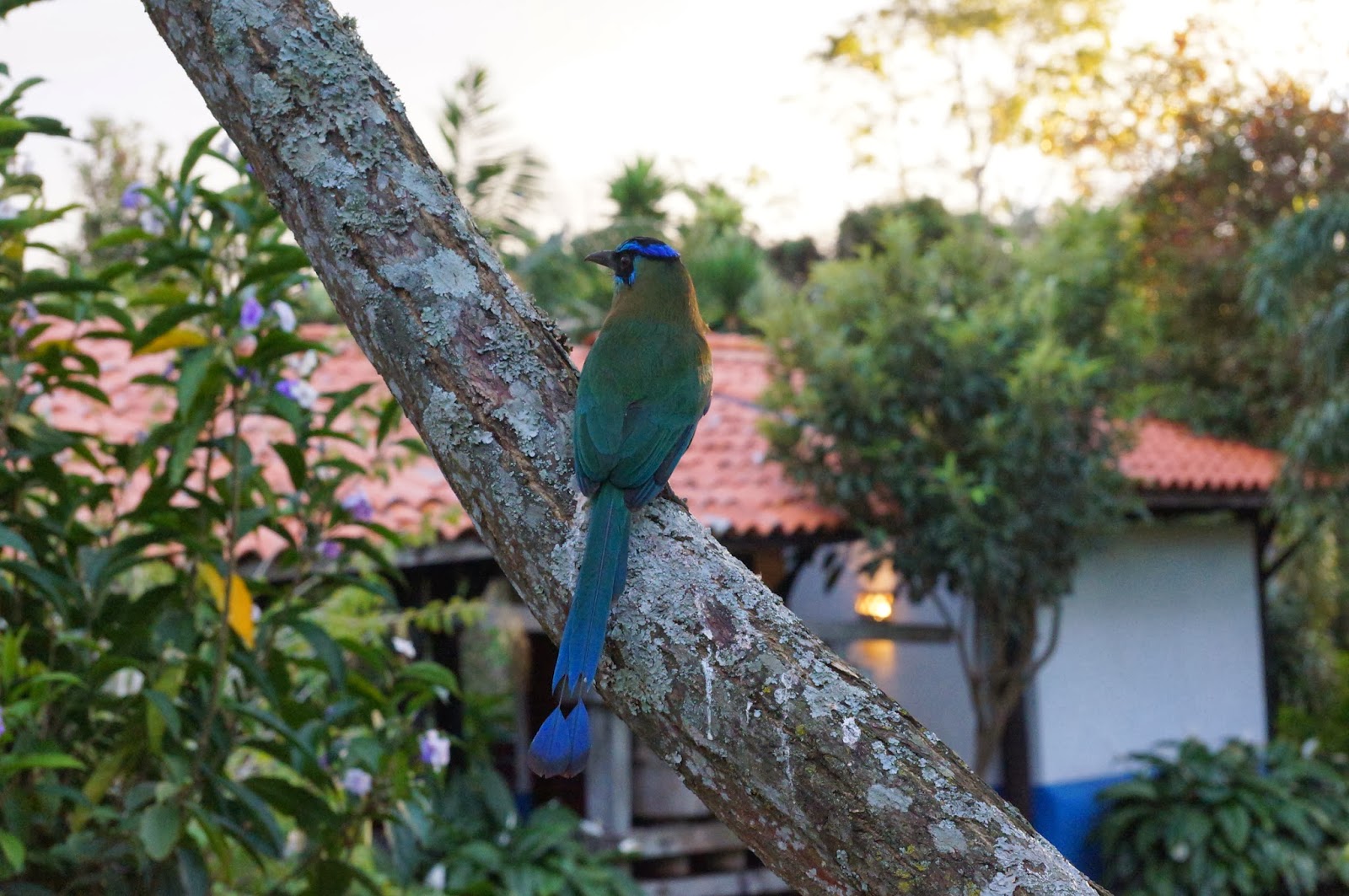 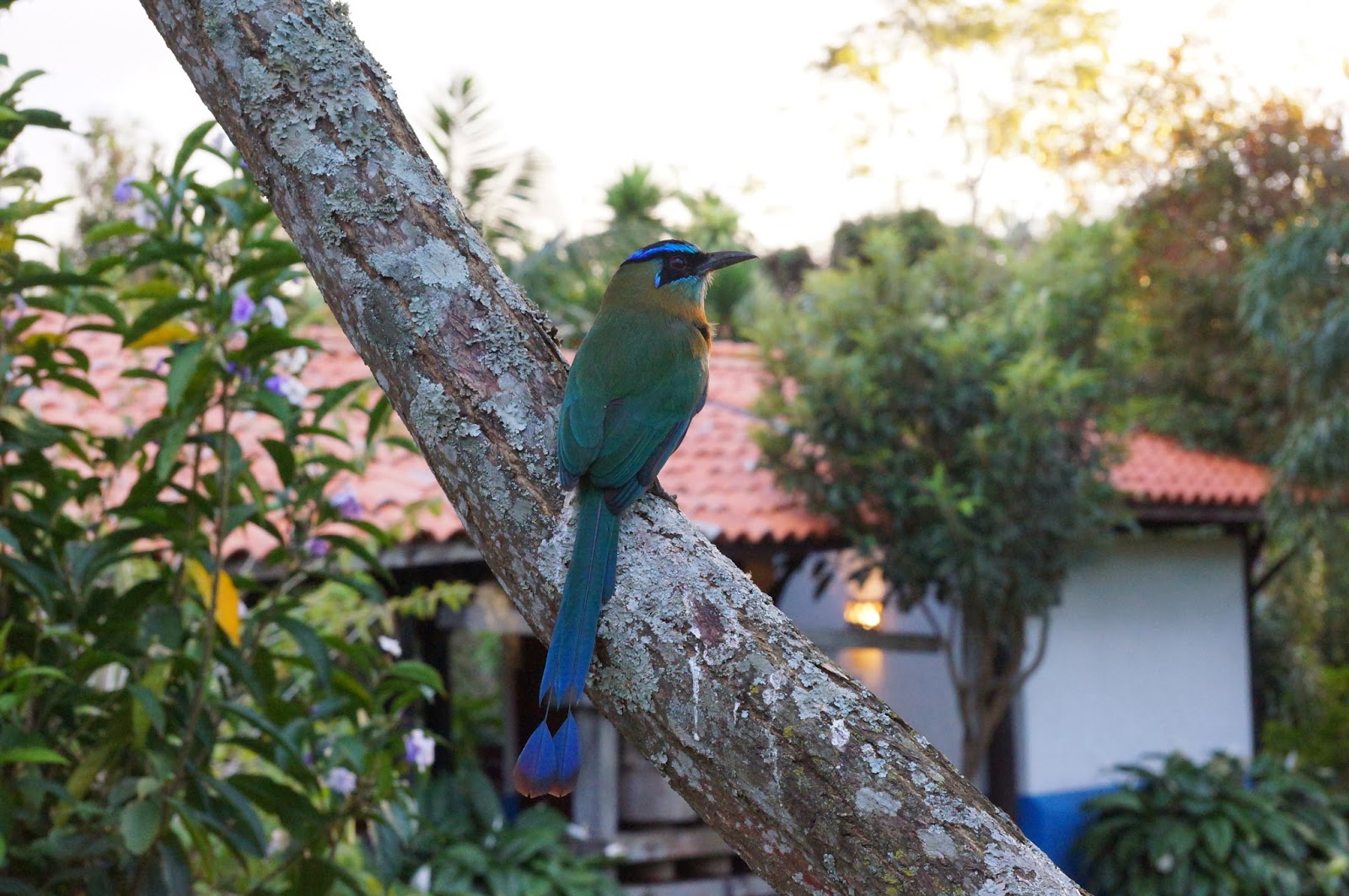 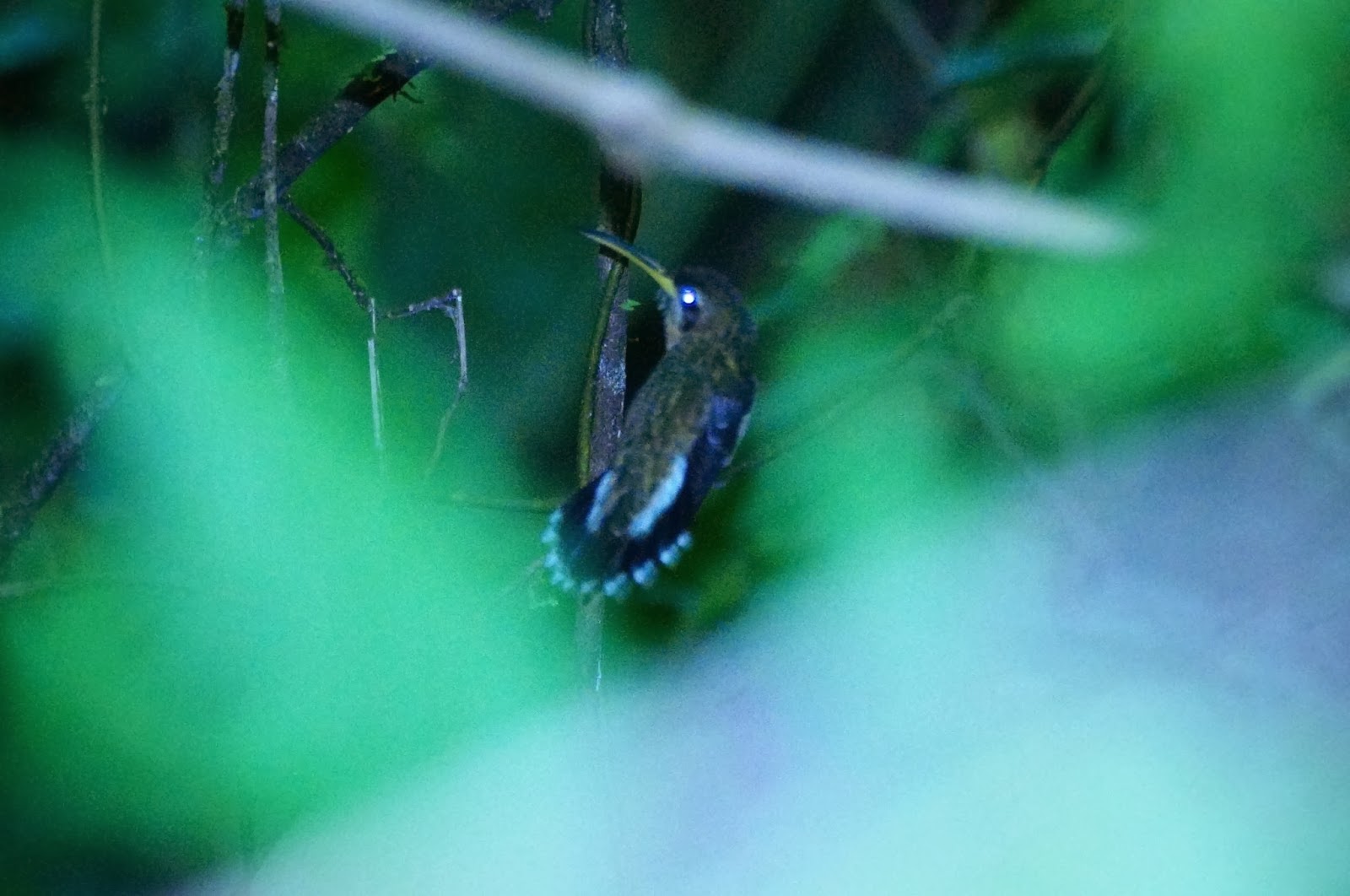 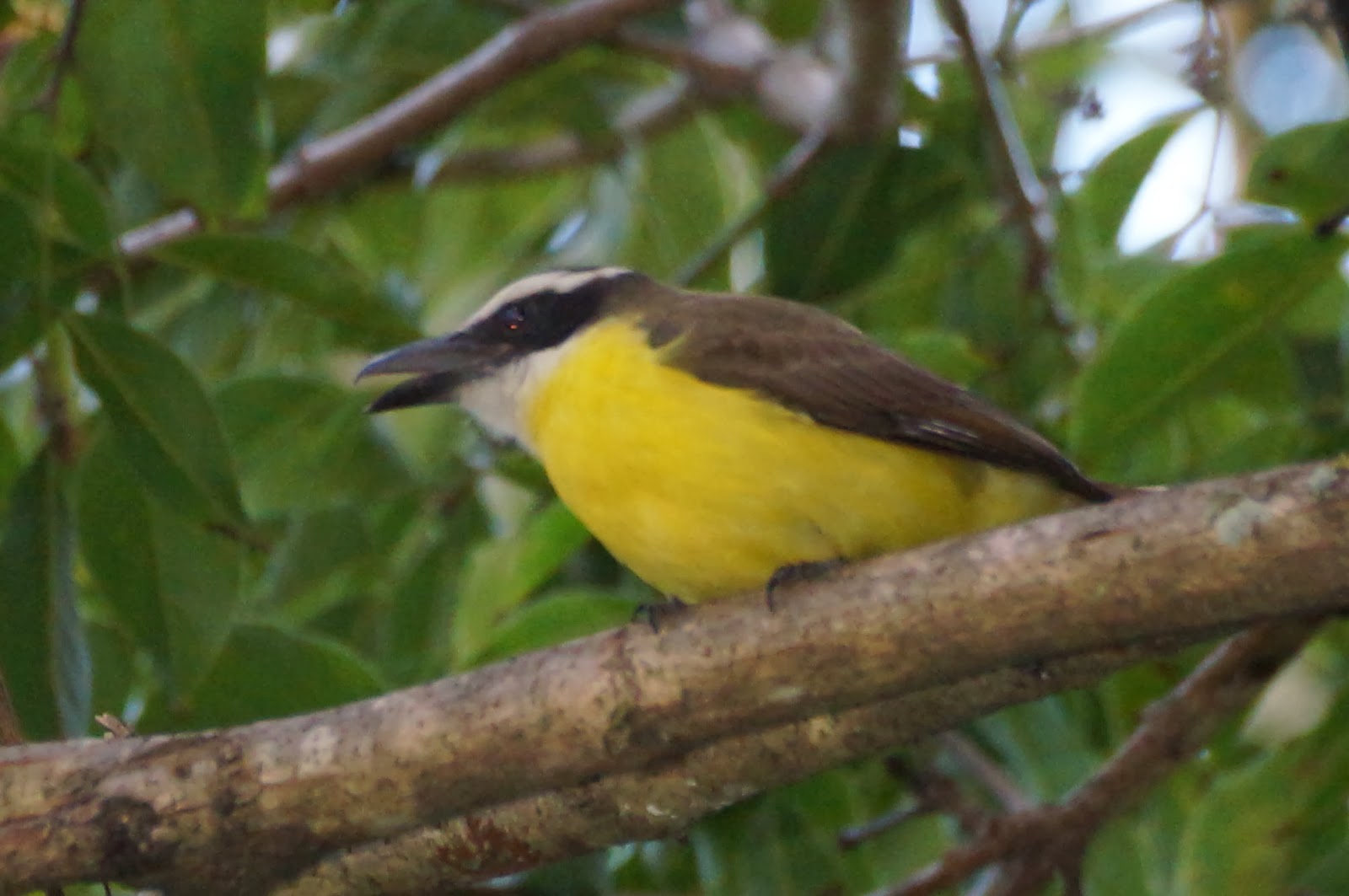 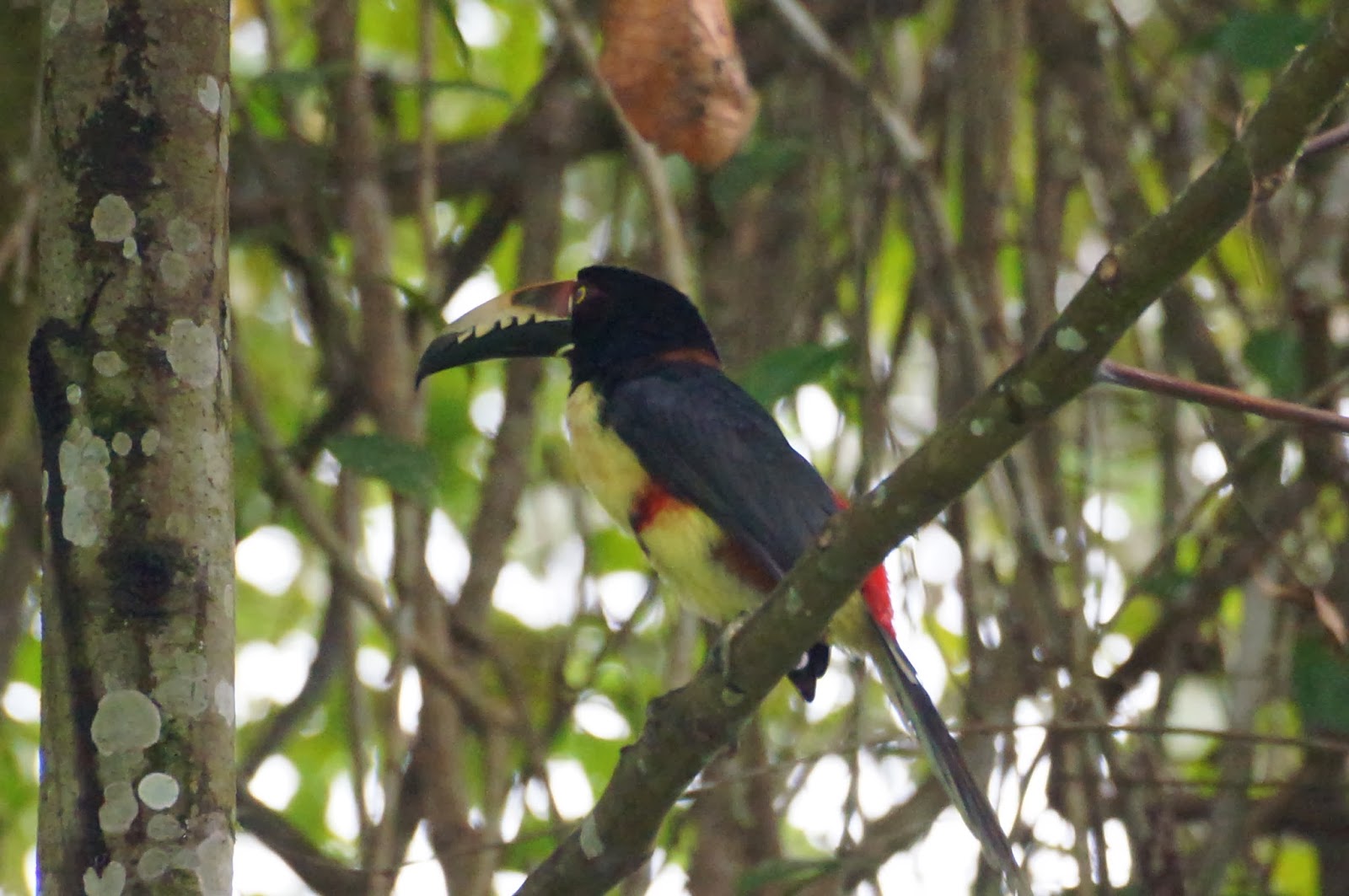 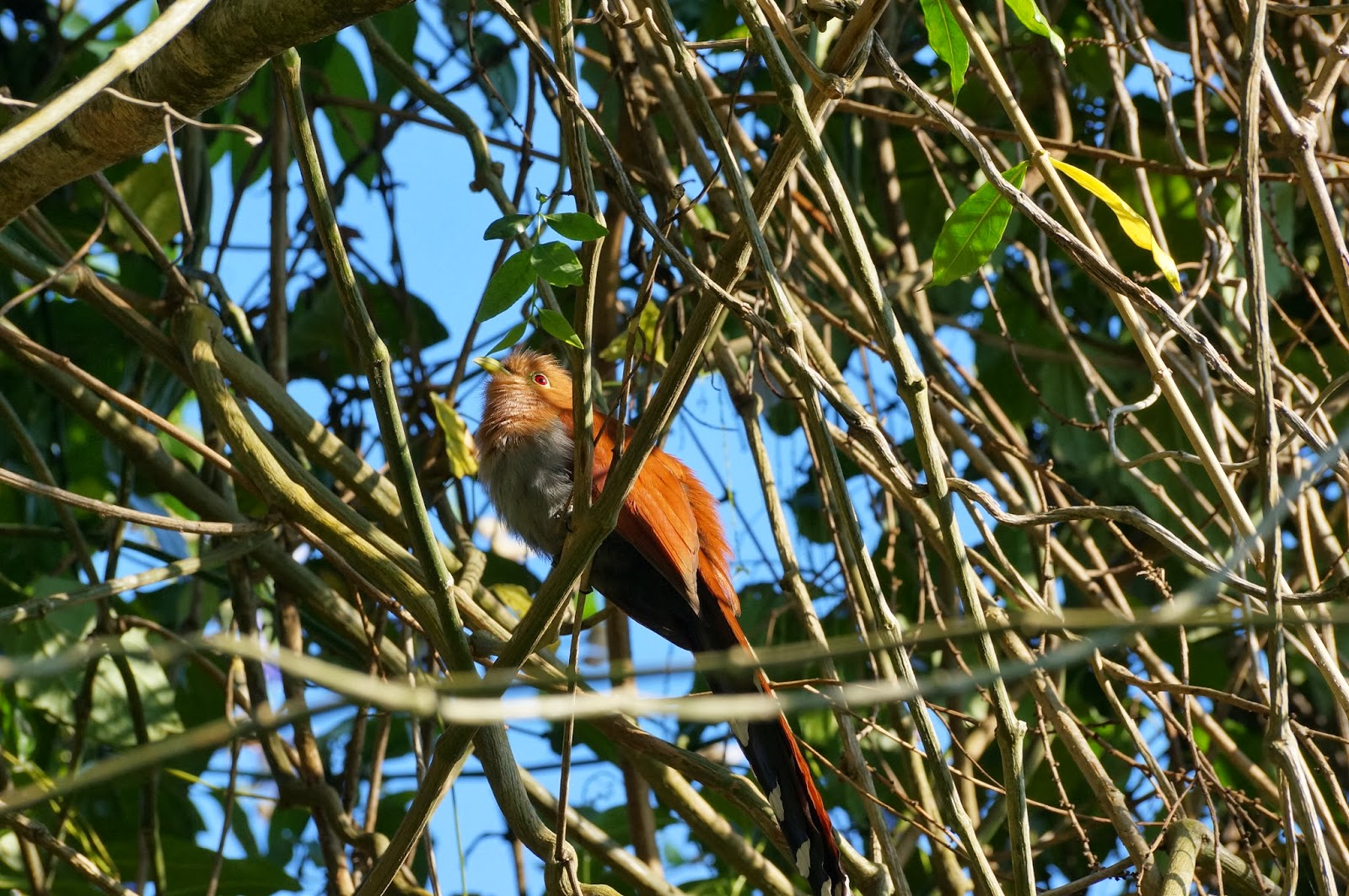 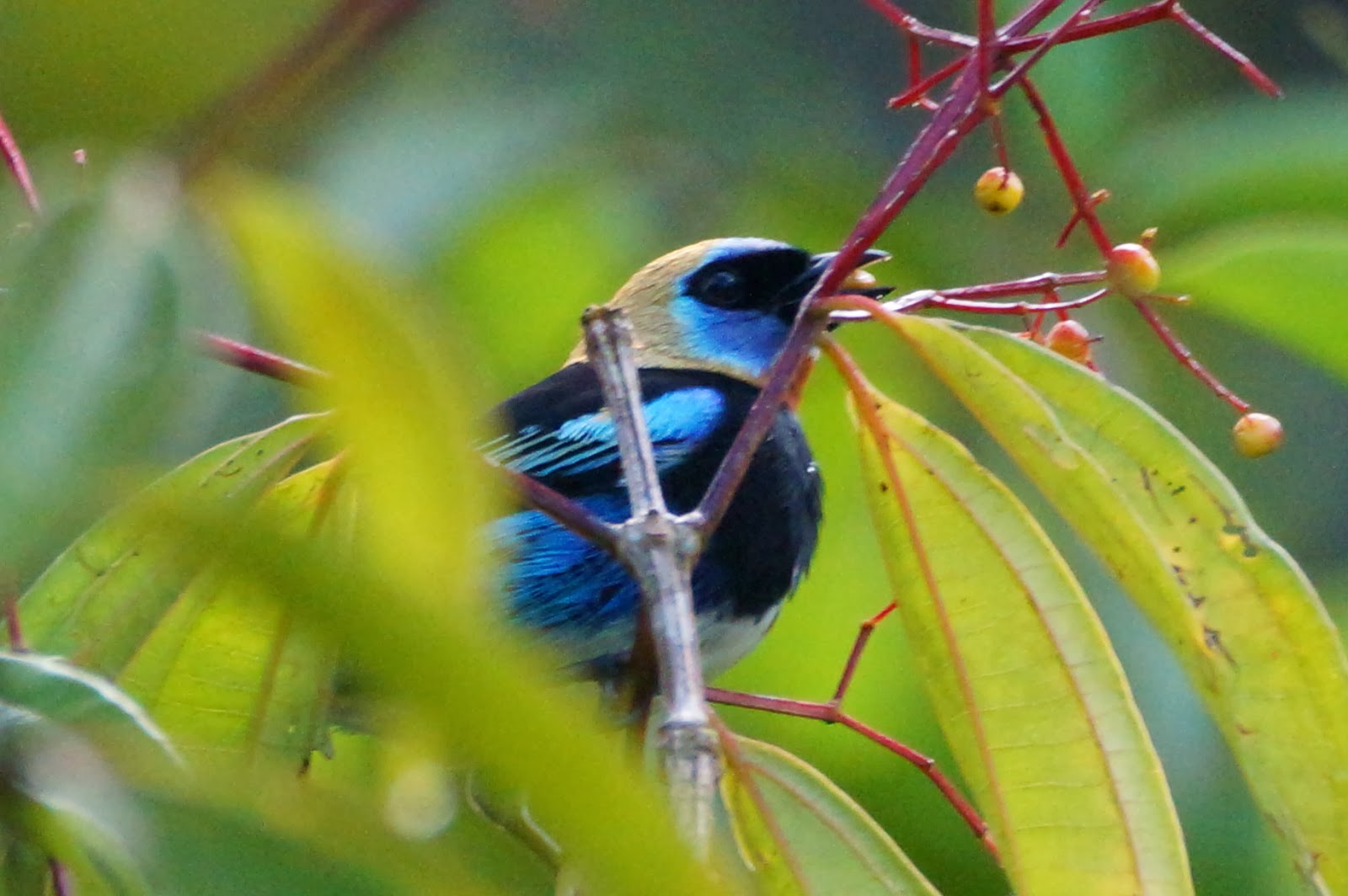 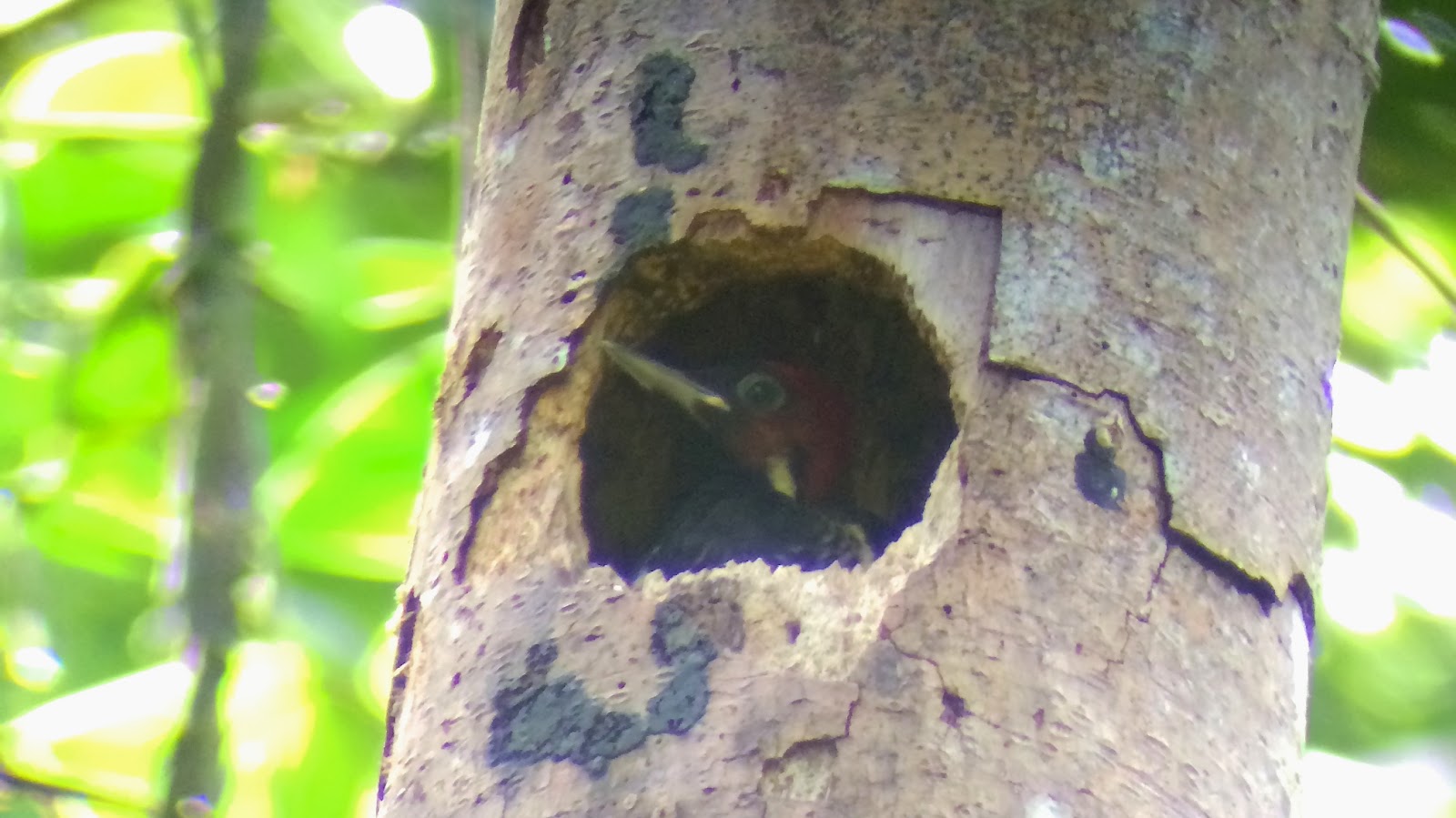 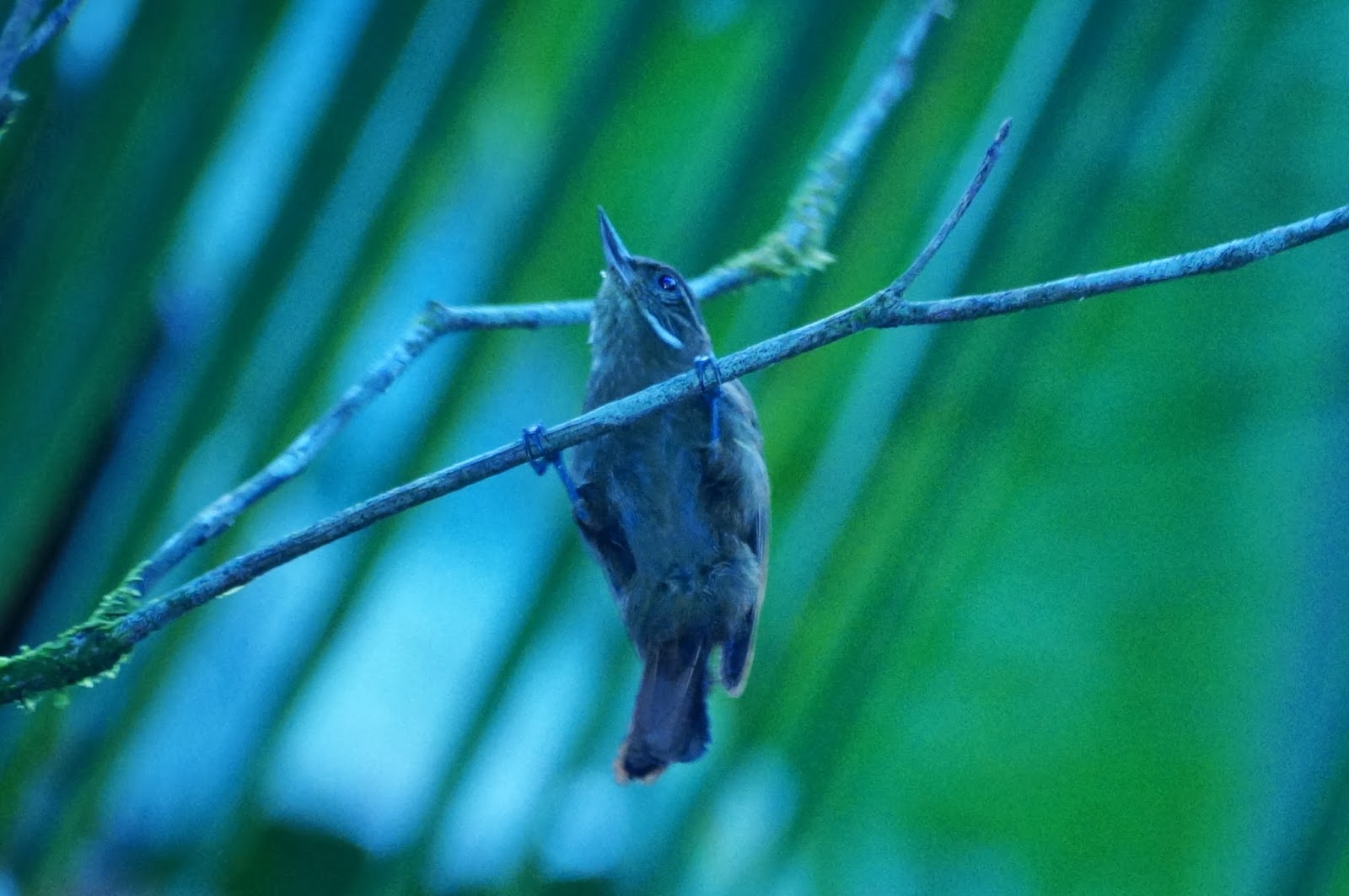 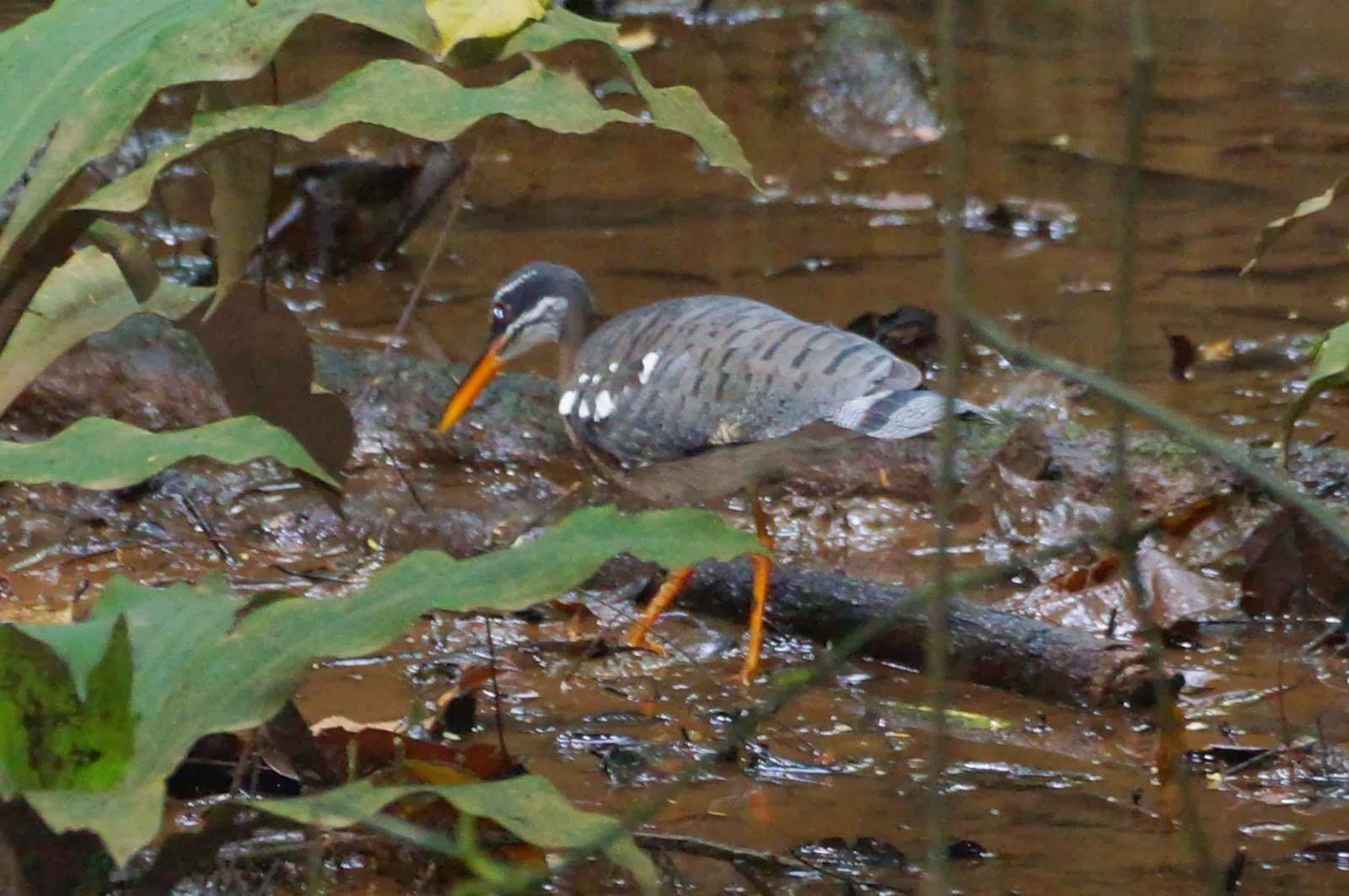