The Dog Days of Birding

If you're not traveling a lot, birding in southern Ontario in the summer is not that exciting.  Yes, there are lots of birds around, including Eastern Kingbirds, Cedar Waxwings, House Finches, but new and rare birds are few and far between.  So when news of a Northern Bobwhite up in the Hamilton Mountains filtered through my e-mail in box, it was call for celebration, kind of.

I had to wait a couple of days, but when I did arrive at the designated spot, there were many birders, and a few chasers that I seem to run into at every rare bird alert, including a couple who's 6 month old baby has quite the life list already.  It was pouring rain when I parked, so I hung out a bit and then decided to go get some lunch and return.  And when I did, the sun was out and the Bobwhite was calling.  It was, however being very gaurded about giving up its location.  People came and went and eventually I got a glimps of the bird, but fumbled too long with my camera to get a photo.  The one pictured below is a Bobwhite I saw last year.

And just today I was in James Gardens.  Started with biking and ended with birding.  As I was getting my binoculars out of the car I ran into Don Burton, who leads bird walks in James Gardens in spring and fall, and together we found a pair of Solitary Sandpipers, while looking for Spotted Sandpipers and Killdeer.  Only my second new species for July, but that could change when I head down to Florida and try and chase down the Smooth-billed Ani in Miami. 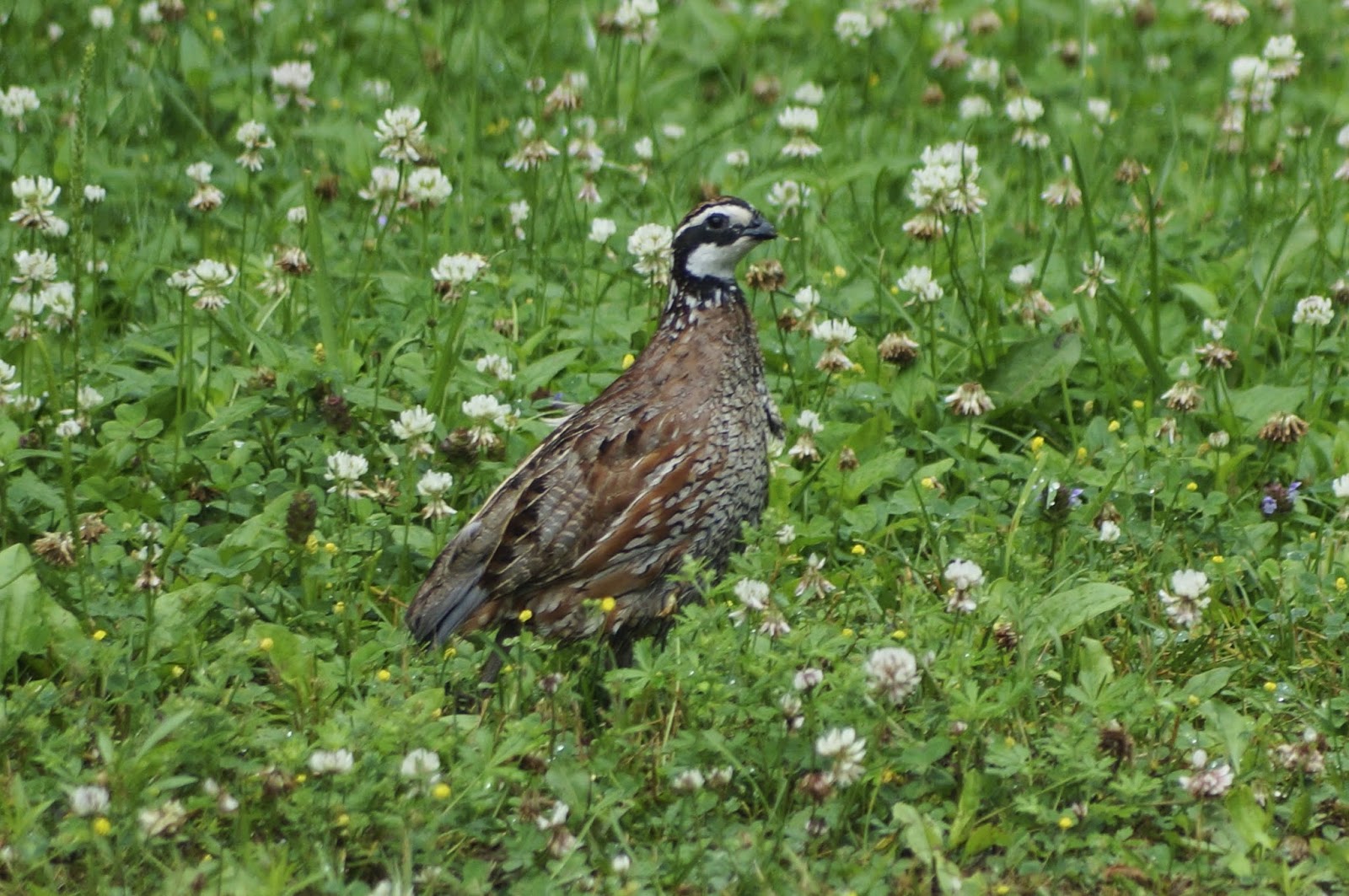 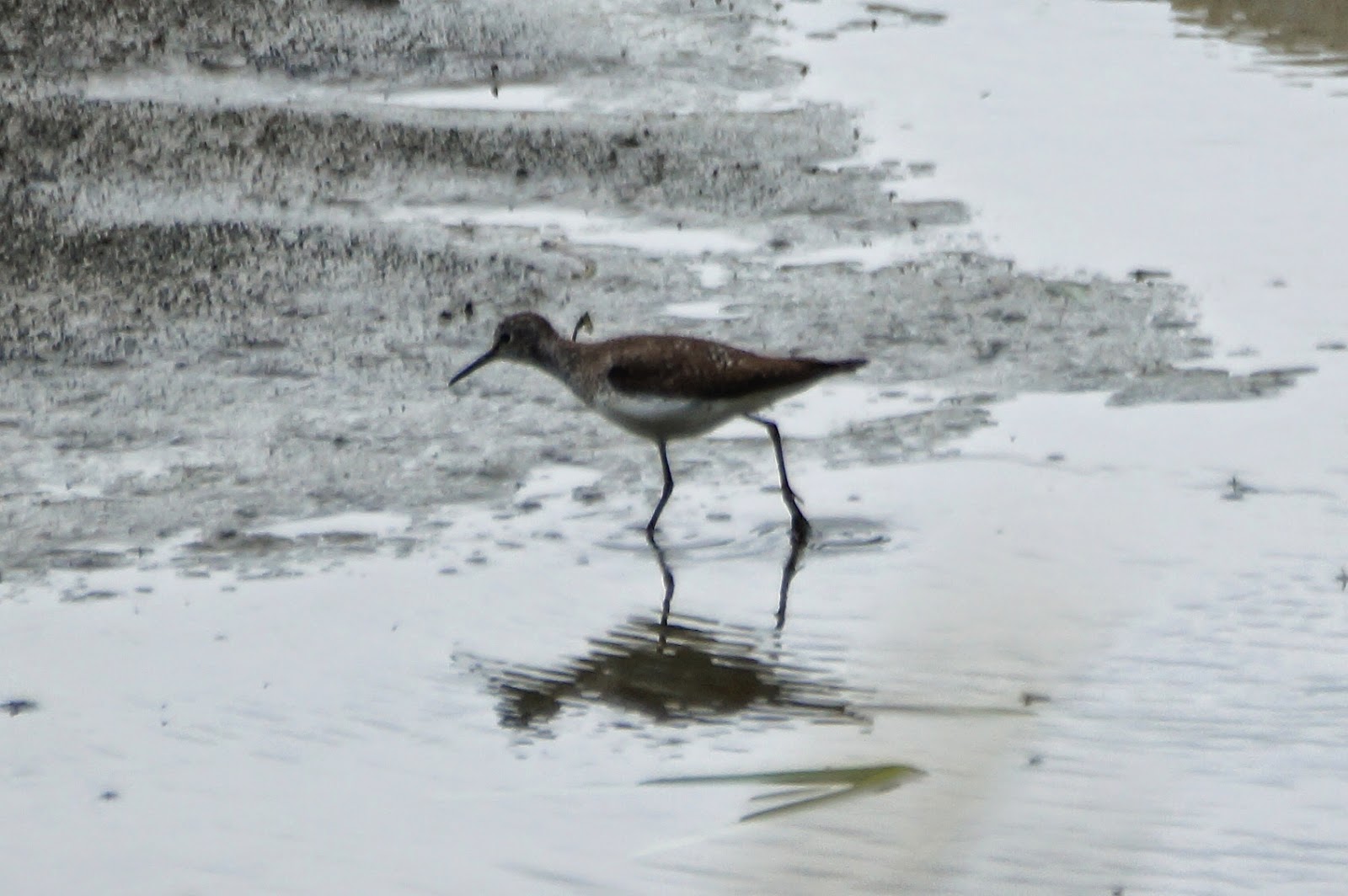 Chasing Rarities is a Lark

I actually got Sue to join my on a crazy chase for a rare Ontario bird this past week.  A Lark Bunting, normally seen in Arizona, where I had seen at least one back in 2012, showed up on Amhurst Island, nearly 3 hours east of, and a ferry ride away from, Toronto.  It had been reported a few days before but it wasn't until this past Monday that we were able to get out there, both having a rare Monday off.

So off we drove to Prince Edward County, following directions on OntBirds, to the location of the Lark Bunting on Amherst Island.  We arrived at the ferry docks just on time to drive on board for the short ride over to the island.  While enroute I received an e-mail saying the bunting had just been seen around 10am, so we had high hopes it would be there when we arrived.  It wasn't hard finding the location, as there were already some birders set up with their binoculars and cameras, but no bunting.

Sue enjoys birds as much as anyone, but she wasn't willing to hang out for hours waiting for it to appear.  We did have a picnic lunch we could have had while waiting, but luckily within 20 minutes of our arrival, the western vagrant Lark Bunting landed on the guy wires of a tall antenna, gave everyone a great show and even sang a song very reminicent of a Cardinal.

Everyone was happy and we were off in search of a Snowy Owl that forgot it was supposed to head way north to the Canadian Arctic for the summer.  After a few false starts and our picnic lunch by the water, we eventually stumbled upon the Snowy.  Well, Sue stumbled up it.  I was looking at Purple Martins off in the distance and Sue went down to the beach to take photos, when she found it on a rock outcropping hiding behind some vegitation.  Cool find and just one of nearly a dozen Snowy Owls I've seen this year.

But we weren't quite done yet.  On the drive home we stopped for dinner at the Lake on the Mountain, which litterally is a lake formed into a mountain top.  It was on our way to a sighting, well hearing, of a Chuck-will's Widow.  I've tried on several occasions to go out and listen for one, but came up empty each time.  Hopefully this would be the night.  We drove to Picton and up what seemed like a back alley way, called Hilltop Road.  A narow gravel road surrounded by trees and bush.  We were a bit early for the show, but spotted an American Woodcock just as dusk was settling in and even before dark Sue heard the first calls of the Chuck-will's Widow, which if you use your imagination a little does actually sound like its name.  There were a lot of bugs, so Sue went and sat in the car and missed hearing the Whip-poor-will.  The widow was a lifer for both of us.  So it was worth the drive to Prince Edward County for sure, as I added three new birds for my year list and two new speicies for my Ontario Life List.

Some photos from Prince Edward, Col. Sam and a few leftovers from British Columbia:

Spending its summers in the midwest, the Lark Bunting is a rare visitor to Southern Ontario: 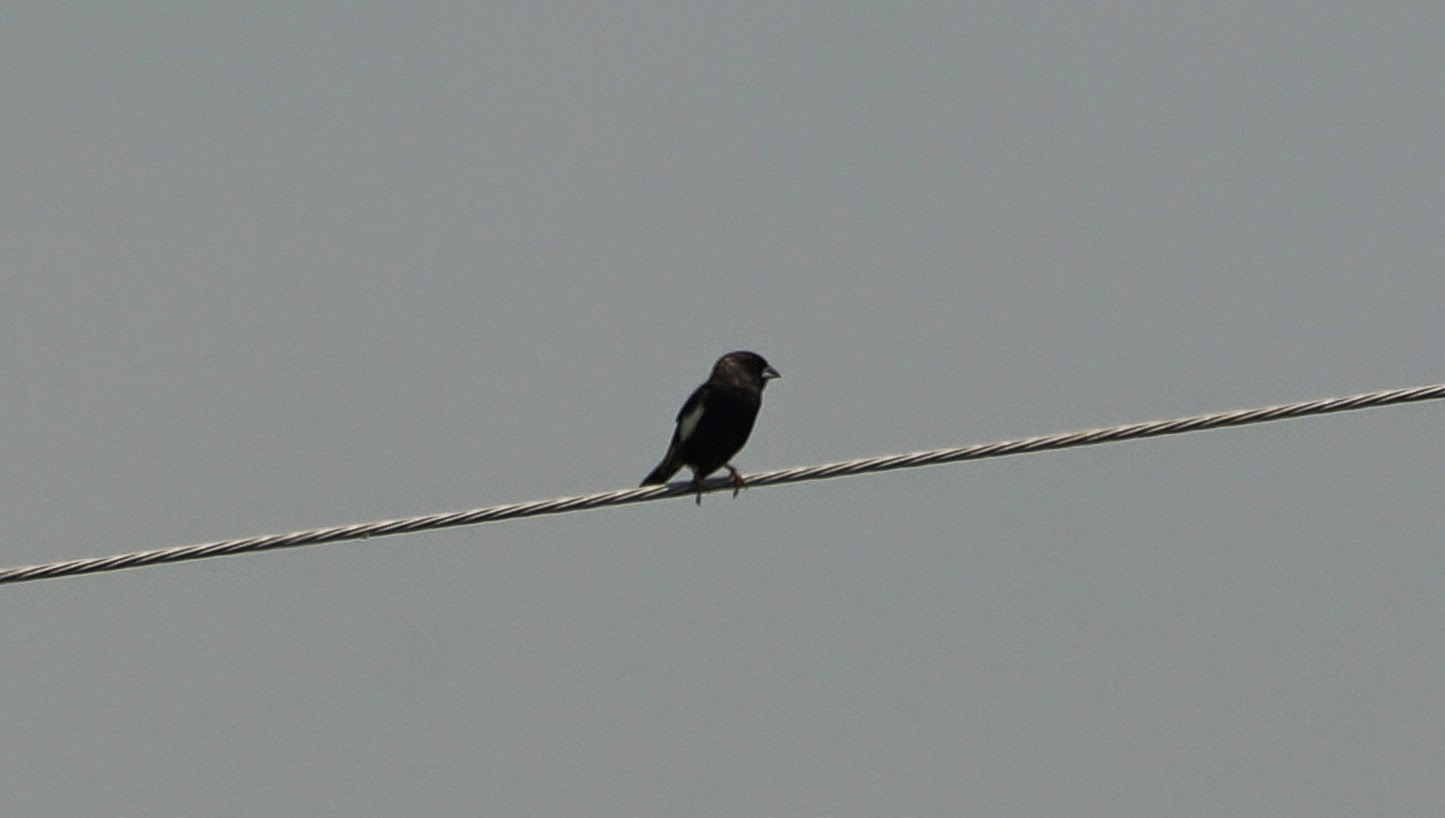 A winter resident of Southern Ontario, this Snowy Owl decided to spend the summer: 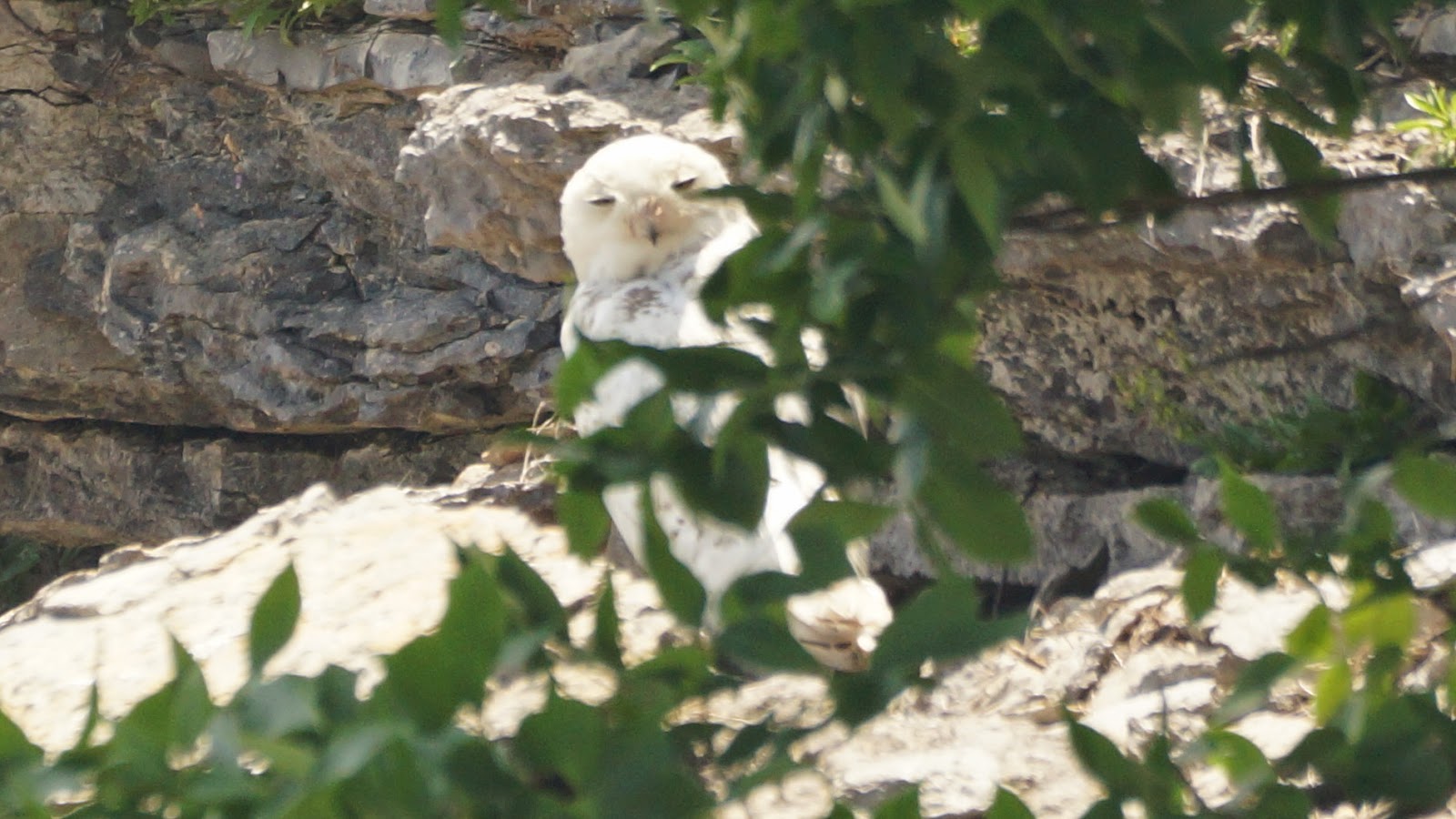 Anna's Hummingbird, Barred Owl and Bushtit, right where they should be in Vancouver, BC: 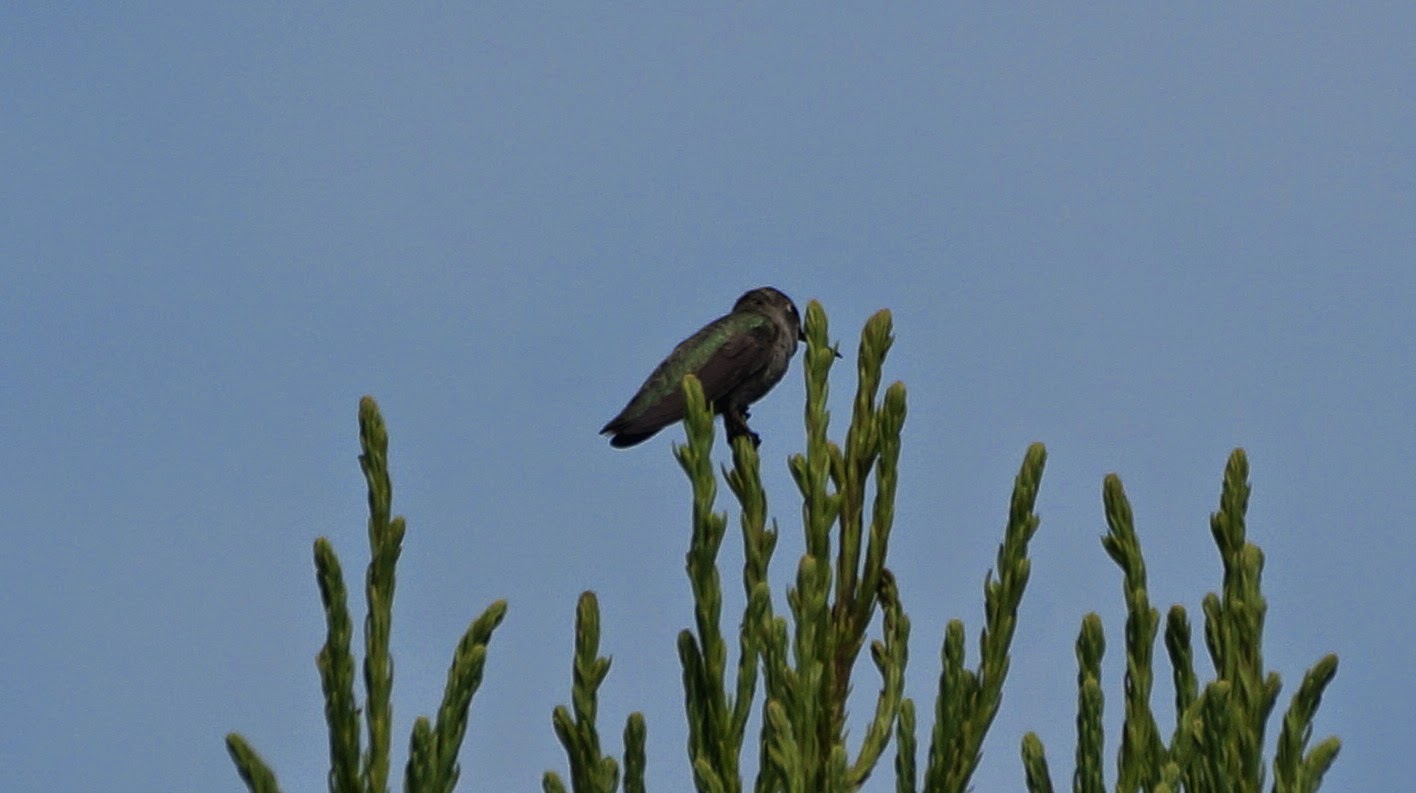 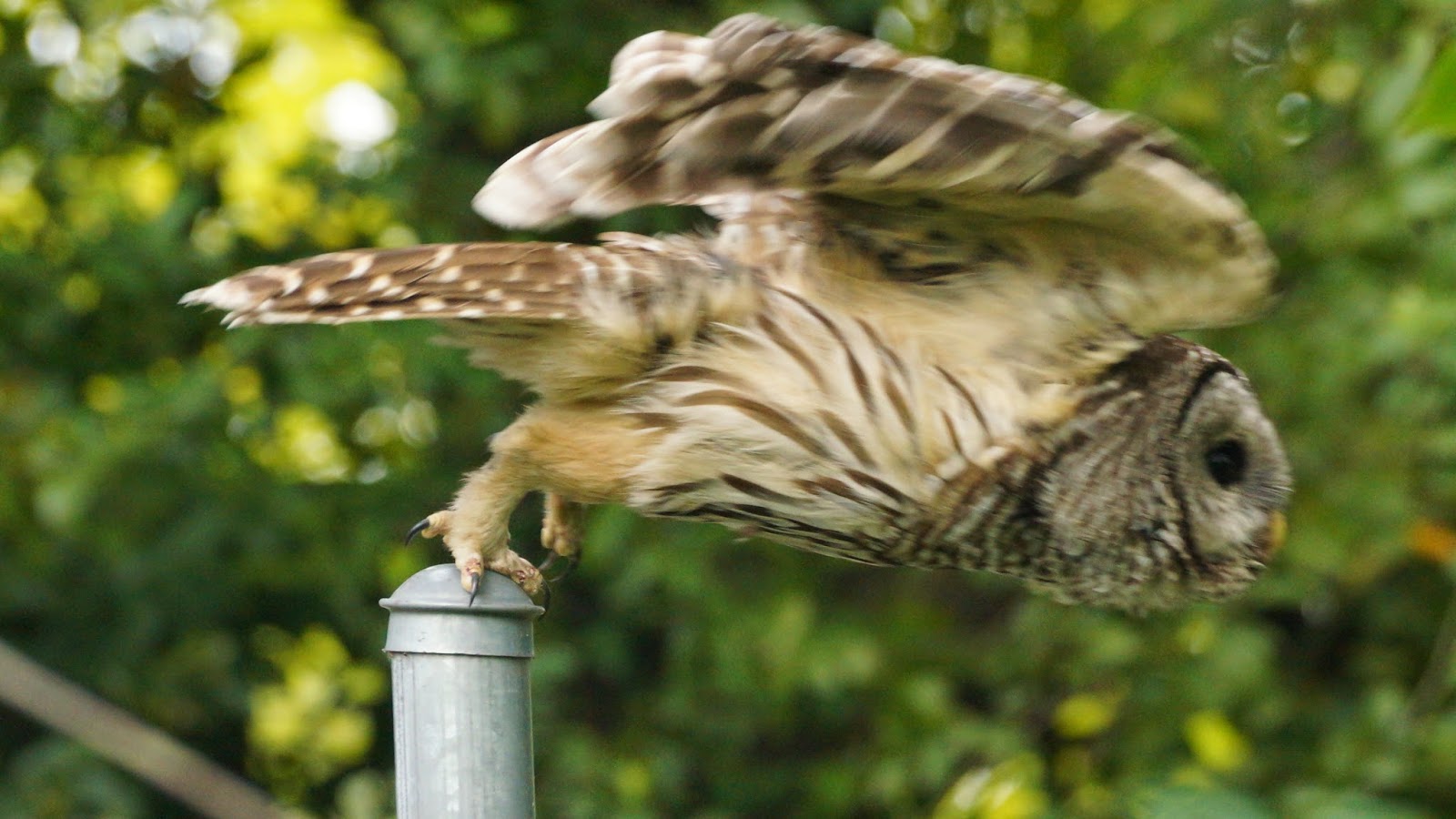 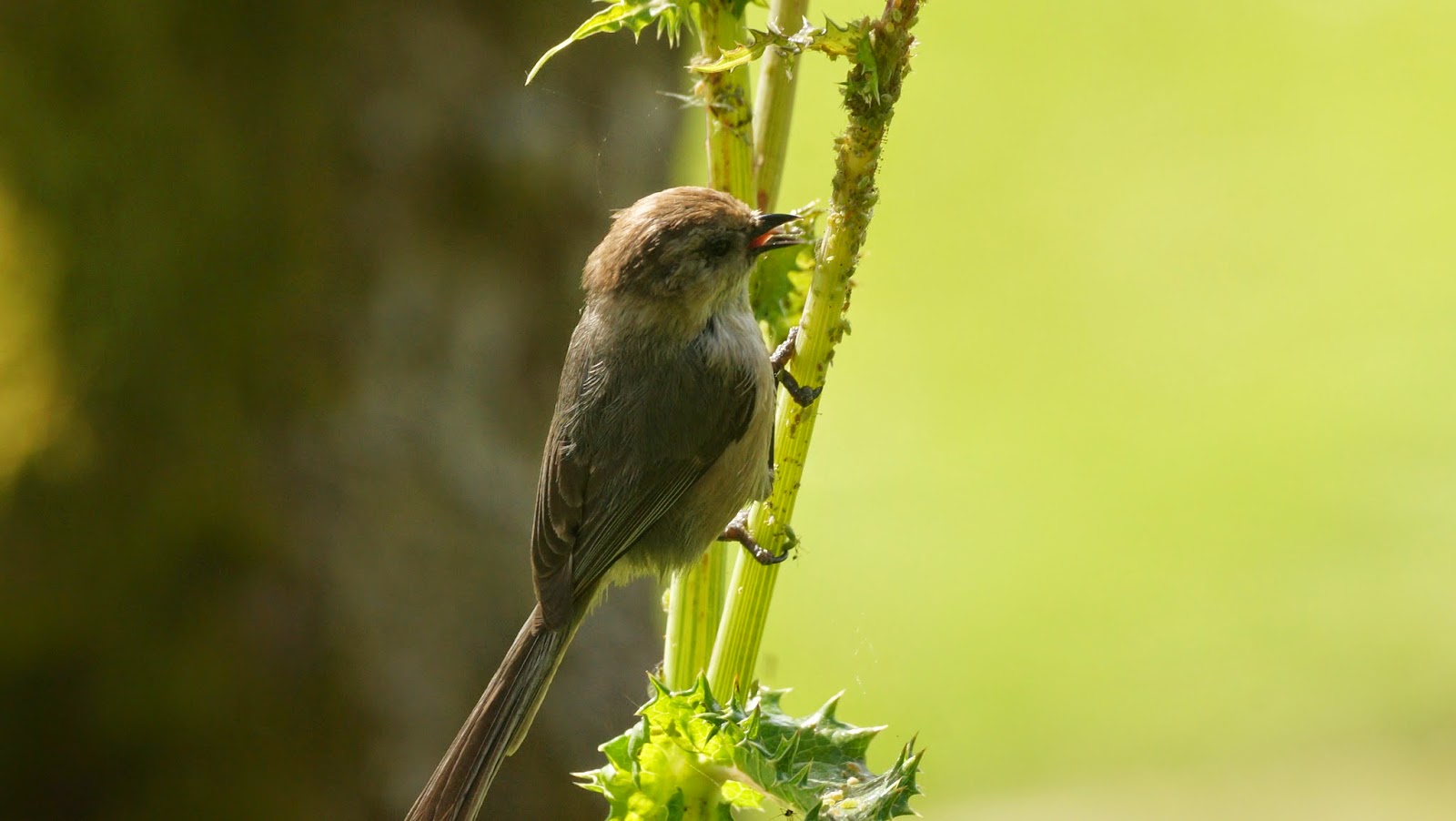 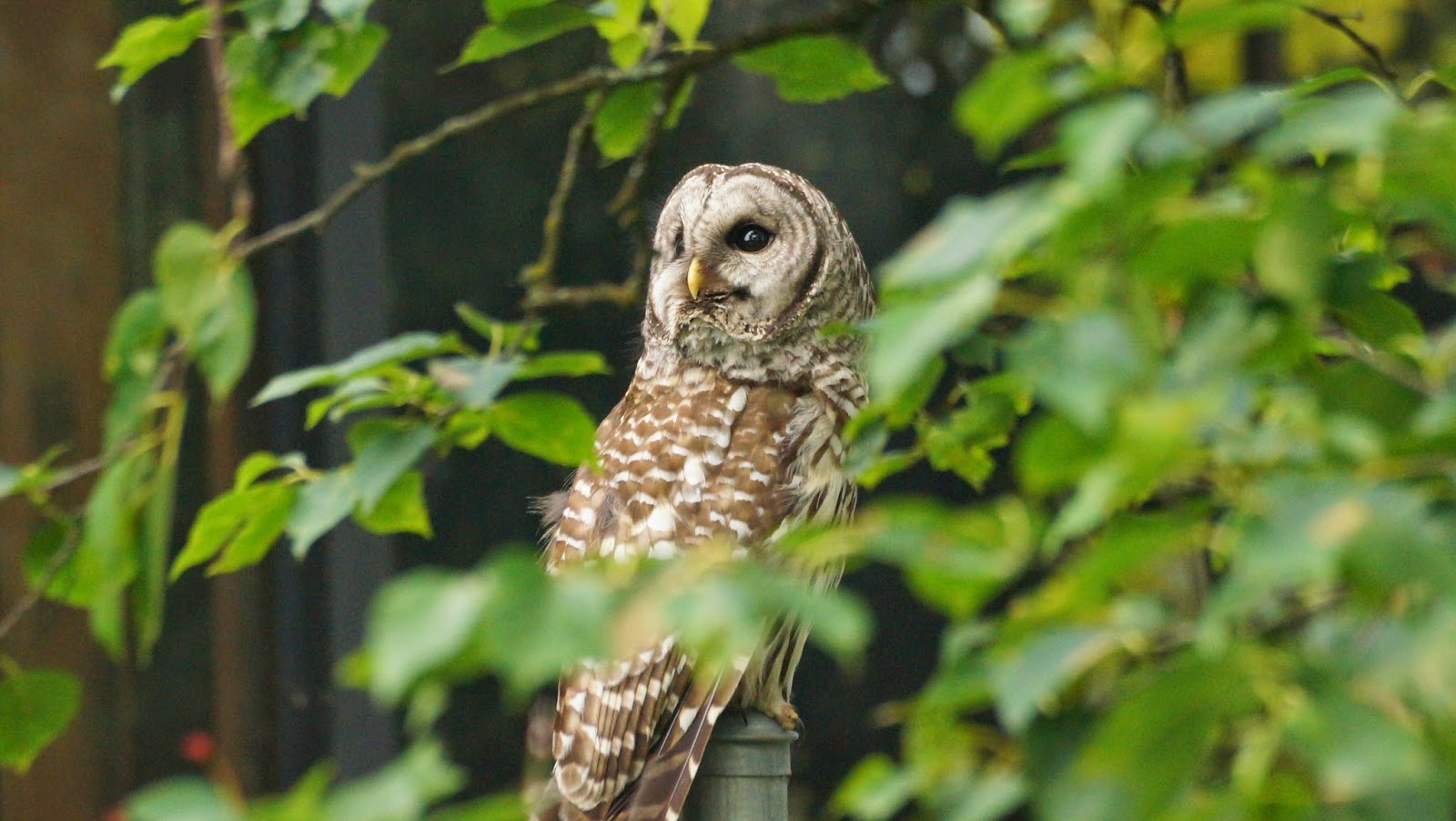 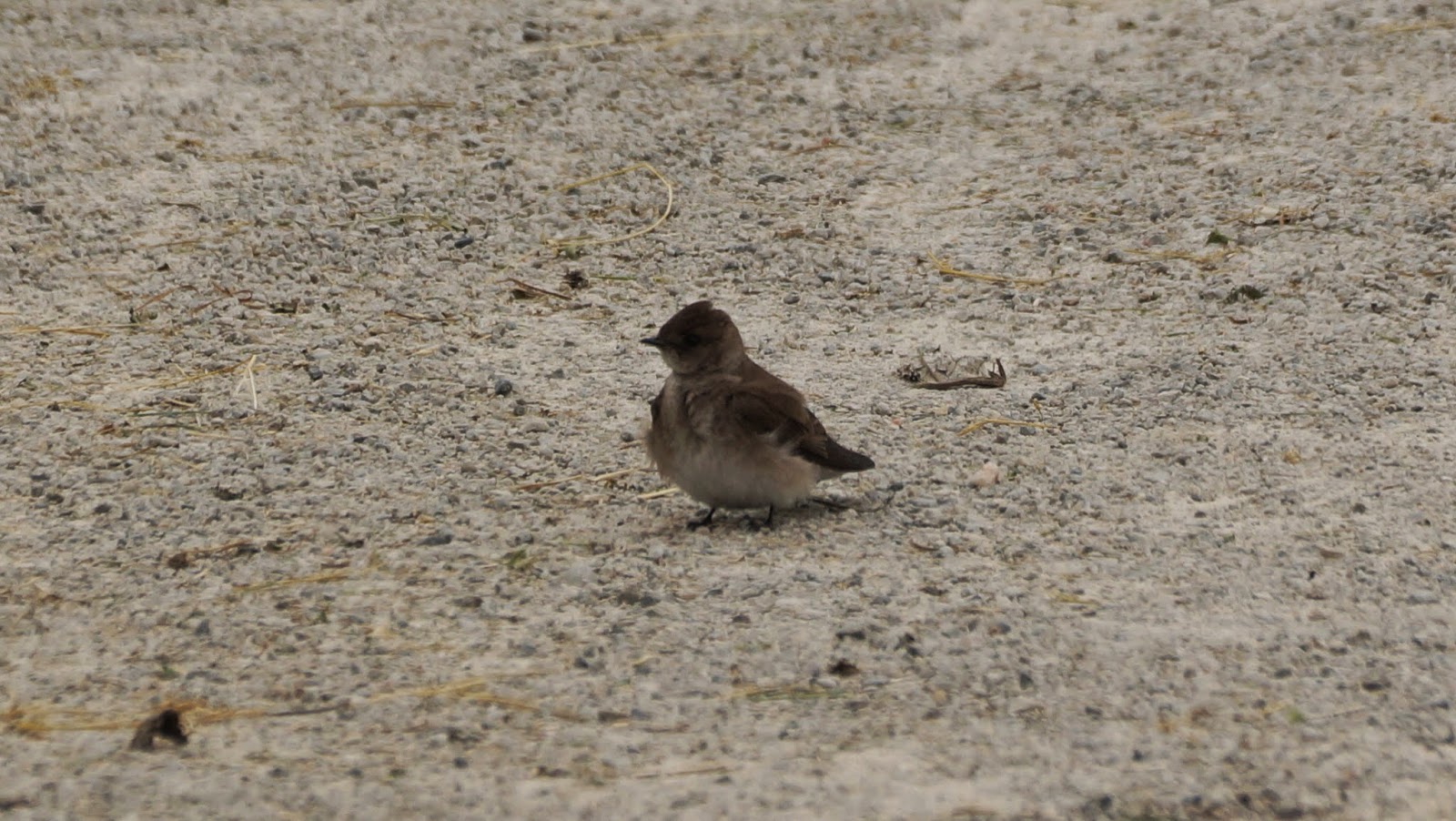 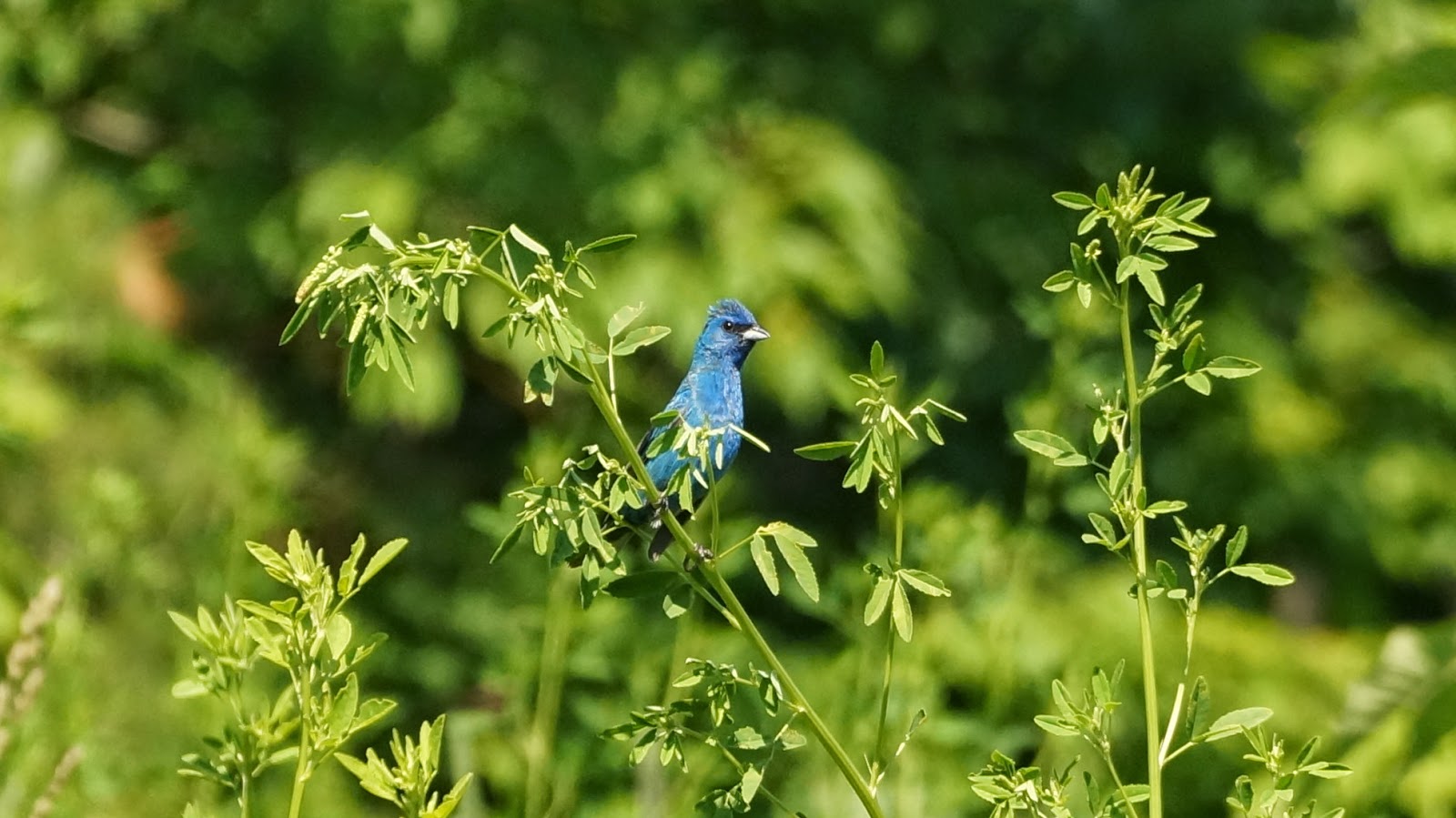