Okay, so the last chase for the Western Spindalis was actually the Penultimate Chase of 2015.  Today, December 27, was the real, maybe, last chase of 2015.  And in a way it was kind of fitting, bringing things full circle from December 27 of 2012 when I was about to embark on what was, at the time, the crazy notion of doing a Big Year, without having any actual birding experience.  It had all started with the movie, The Big Year, followed by listening to the audio production of the book, The Big Year.  Late in December of 2011 Ontbirds and NARBA were reporting a male Smew in Whitby Harbour just outside Toronto.  Since my Big Year didn't start until January 1, I decided to wait until then to go see it.  Of course it was gone by then, never to return.


However, about a week ago, while I was still in Florida, and over Christmas, a female Smew showed up just west of Cornwall and I was finally able to go see it.  I was driving my daughter back to Kingston and it was only another hour and a half down the road.  On what was a wet, but somewhat balmy day for December I teamed up with several other birders, some doing a Cristmas Bird Count, who helped me find the Smew.  I hadn't brought my scope so it was a good thing I found such gracious helpers.  One thing about birders, unlike almost any other hobby, they will always come to your aid in finding rare birds.  I got looks at it in two locations, as a few of us chased it from one inlet to another.

Below is the only photograph I got as the Smew was being chased by a Common Goldeneye: 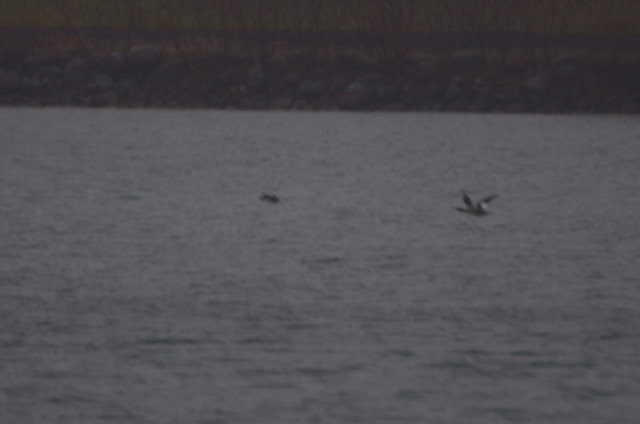 After finishing with the Smew, I went out in search of Tundra Swans, Barrow's Goldeneye and a long staying Bullock's Oriole, as seen below.  Alas it was such a gray day that not many of photographs came out. 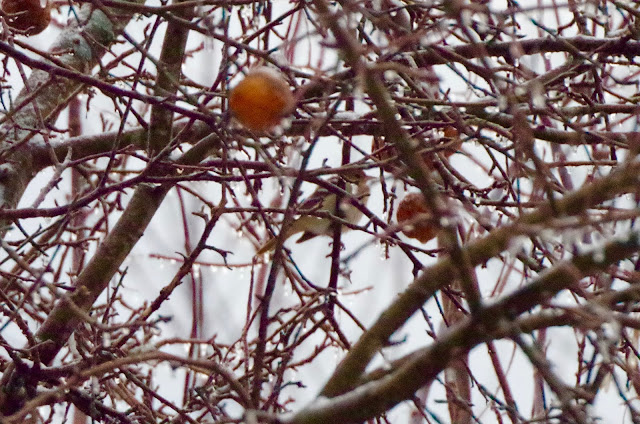 The only nice photo I took all day: 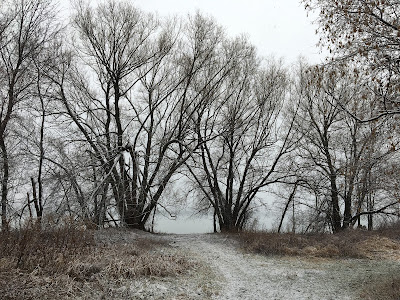 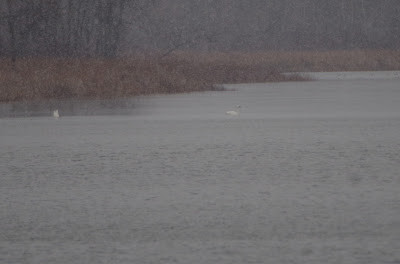 This is how most of the day looked liked through my camera lens:

Below, you can hardly see a Bald Eagle that flew over while I was looking for the Smew: 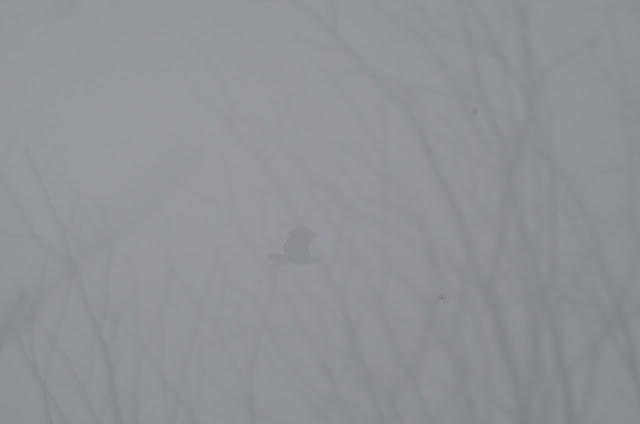 Again, hearkening back to my Big Year, there was yet another rare bird chase in my future.  That is, if the bird in question stayed put in Florida while I conducted interviews in Nashville.  Throughout the week I kept checking eBird and the male Western Spindalis kept showing up in a park near Fort Lauderdale.  The penultimate bird of my 2012 Big Year was a female Western Spindalis in Key West Botanical Gardens.  This year a male showed up in Markham Park just outside of Fort Lauderdale and I was determined to see it, and get a photo.  Rare female birds are nice, but if you want great plumage, for the most part, you have to get the males.

It wasn't long after I got to the spot where this rare visitor from the Bahamas had been seen, that one of the birders already present, got his eyes on it.  For the next half an hour or so it showed itself and eventually came out in the open for all the photographers present to get a nice photo. 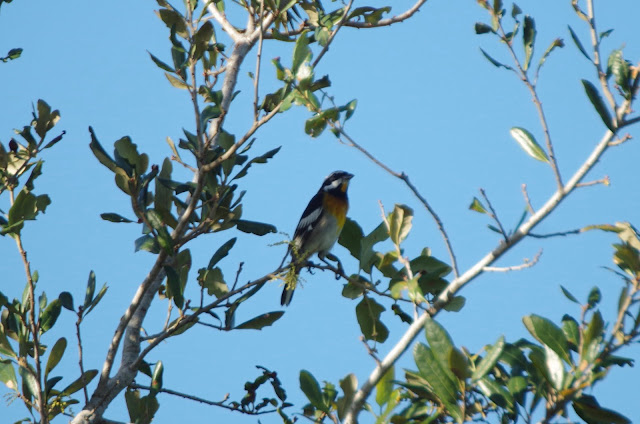 Along with the Western Spindles, frequenting the same trees, were two or three Spot-breasted Orioles, one of which is pictured below: 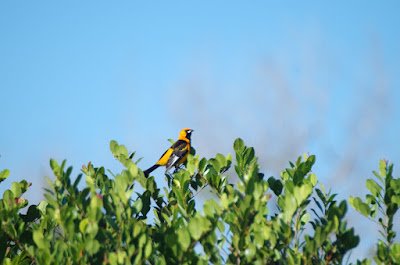 During my week in Florida I enjoyed a large variety of interesting birds.  Of particular interest was the White Ibis equivalent of the "push-mi--pullyu" from Dr Dolittle, along the Lake Apopka Wildlife Drive 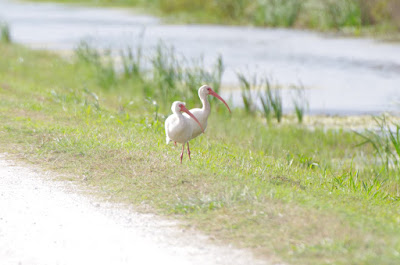 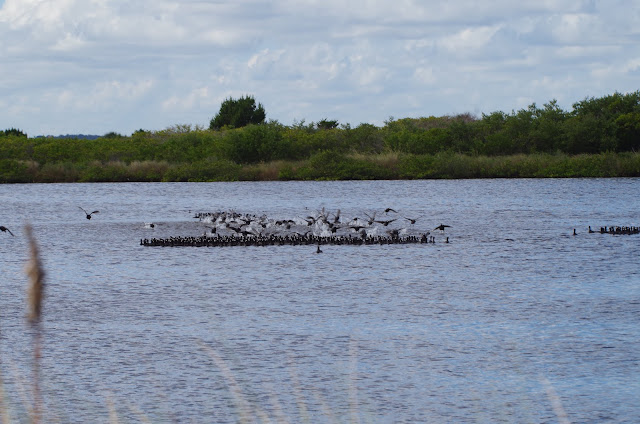 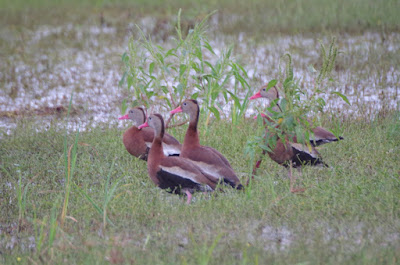 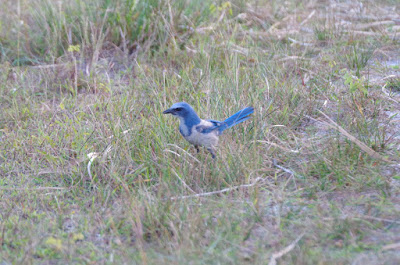 White-winged Parakeet, Across from Ocean Bank on Le Jeune Rd in Miami 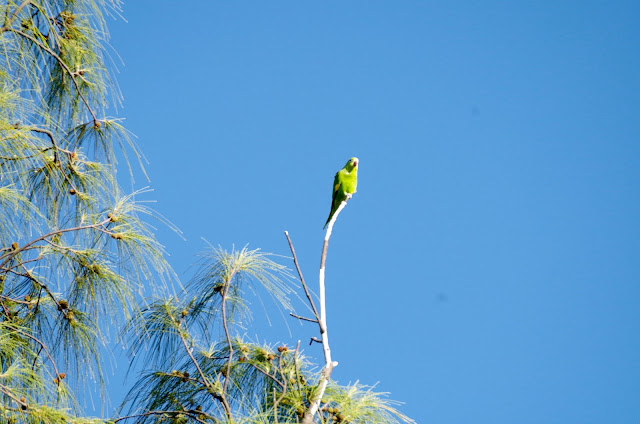 And so I arrived back in Ontario at the end of July with a list of 400 species I had seen since December 10 of 2014, when I started counting my 365 day "year" with a trip to California.  I was just curious to see how many birds I could see in a calendar year that featured trips to Florida, Michigan, California, Texas, Arizona and British Columbia, but while not doing a Big Year.  Between July 27 when I saw Solitary and Baird's Sandpiper in James Gardens and November 30, when a Mountain Bluebird came calling from the mountains of the Midwest, I added 8 more species, giving me a total of 408 for a full 365 days of birding with lots of travel.  In 2015 while doing my first Big Year, I saw 596 ABA Species.  Seeing upwards of 600 species is really hard,(and really expensive)!

However, the final list of birds wasn't too bad.  With a trip to Cranberry Marsh in Whitby for a Hudsonian Godwit, Algonquin Park for Snow Bunting, and a Townsend's Solitaire in Colonel Samuel Smith Park, the "year" was wrapping up quite nicely.  The last new species I saw before December 9 was the best of all.  On November 30 I was back in Whitby at Lynde Shores Conservation area for a very rare and very cooperative female Mountain Bluebird.  This species is very near and dear to me.  It was one of my first rare bird chases.  On January 1st of my 2012 Big Year we went looking for a Smew in Whitby Harbour, but it had already left; a few days later a female Mountain Bluebird showed up.  I chased, I found and I froze that day.

This year, on a lovey, but cloudy fall day another lost Mountain Bluebird showed up on the other side of the GTA.  This one was bouncing from tree to tree, giving all who were present amazing and close looks at this are visitor from the Midwest.  So, with the addition of the Mountain Bluebird I finished my 12 months, from December 10, 2014 to December 9, 2015 with a respectable 408 species. 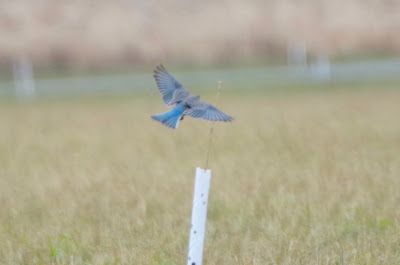 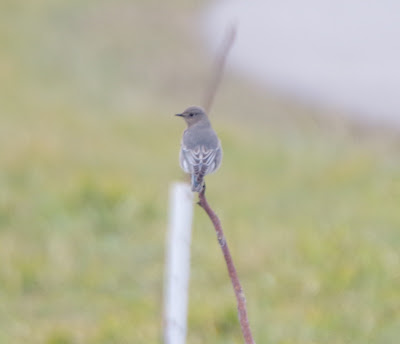 Rare birds always bring out a host of avid birders: 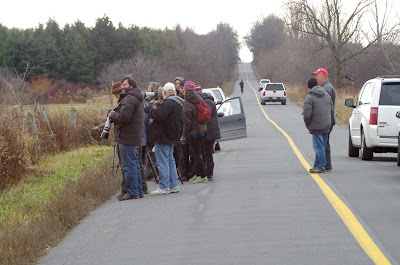