Spring in Cape May: It’s All About the Red Knots

This year we finally visited Cape May, New Jersey during spring migration.  In years past we have gone in the fall, and the birds were great, including a few Red Knots as they molted out of breeding plumage.  After seeing a documentary on the travels of the Red Knots and their symbiotic relationship with the horseshoe crabs, we wanted to see their spring migration in person.  They mass in Deleware Bay every May to feed upon the thousands of eggs the crabs lay on the beaches and it is a feast for birders who come from around the world to witness the event every spring.

Oh, yes, there were lots of other birds.  We saw a Kentucky Warbler, a pair of Yellow-billed Cuckoos, lots of Seaside Sparrows, a few Clapper Rails, some nesting Least Terns and even a lone Piping Plover on a beach in the Delaware Back Bay.  All good birds, to be sure, but really, it was all about the Red Knots.  We saw hundreds, but there were probably thousands scattered on beaches along the coast of New Jersey around Cape May.  The best place to view them seemed to be Cooks Beach, a spot we visited three times during our week in Cape May.  We also saw thousands of other shorebirds, including Ruddy Turnstones,  Semipalmated Sandpipers and Semipalmated Plovers, though everyone just wanted to see Red Knots up close and personal.  And that we did!  Enough with words, as you know what they say about pictures... 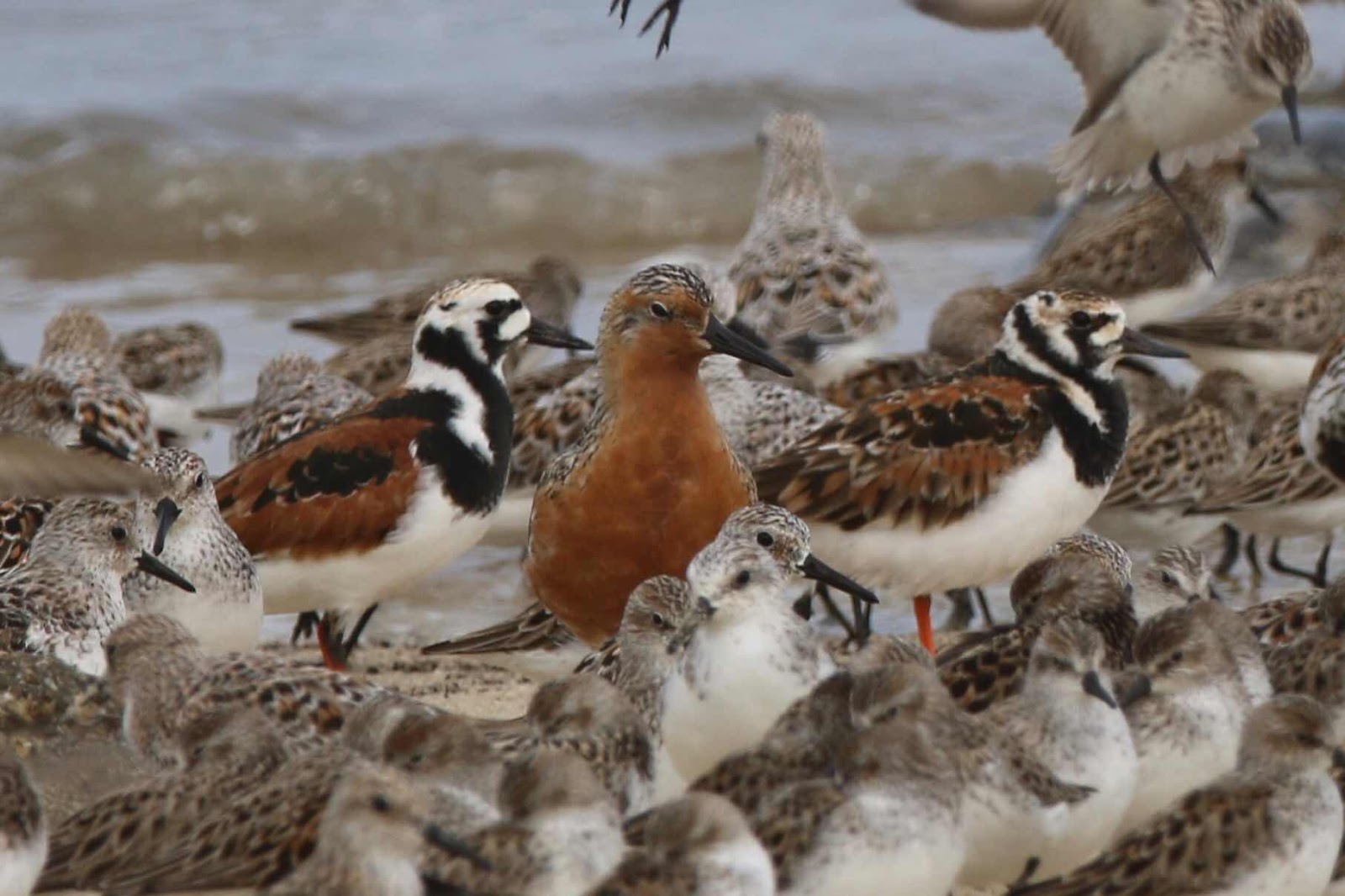 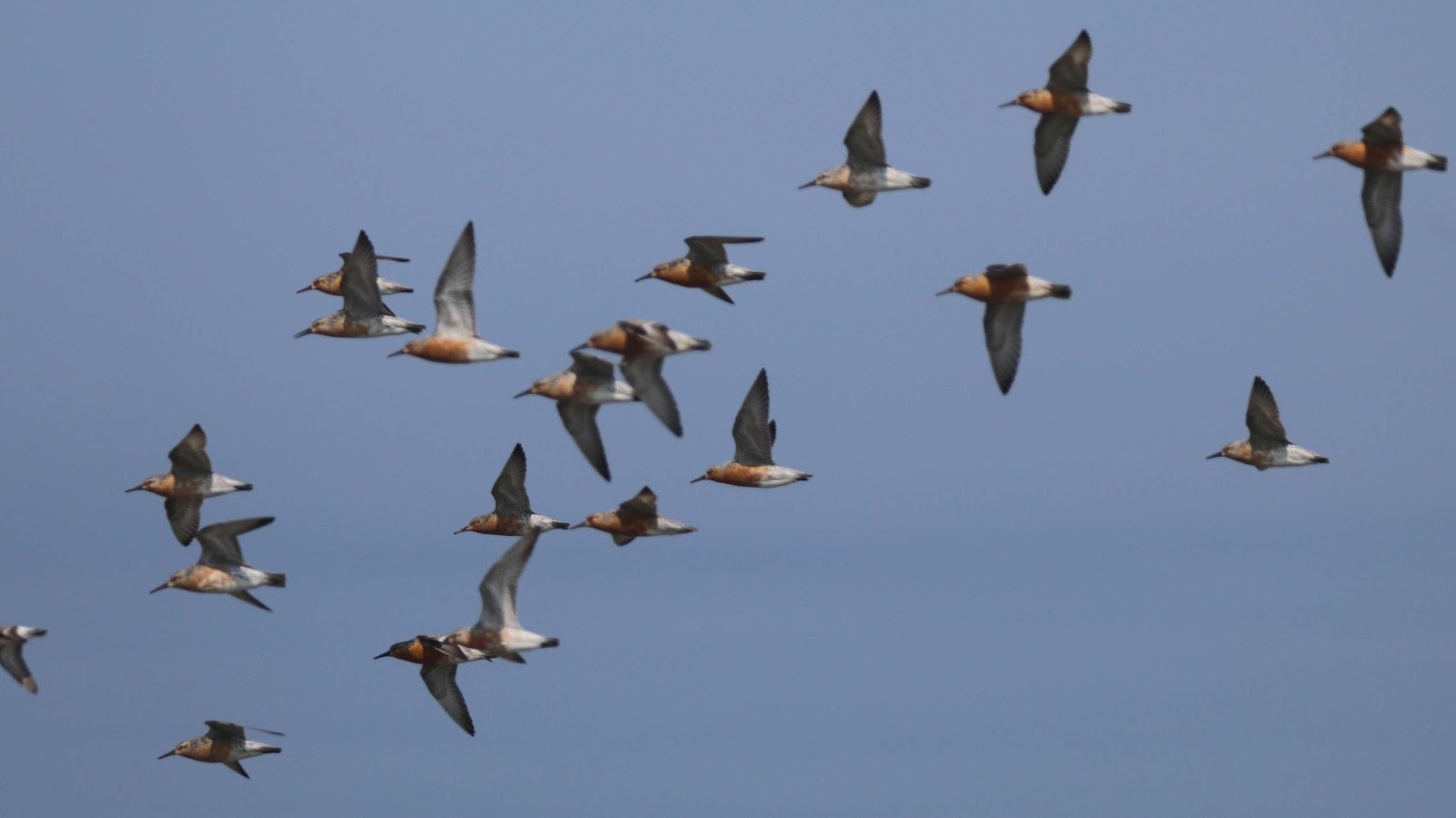 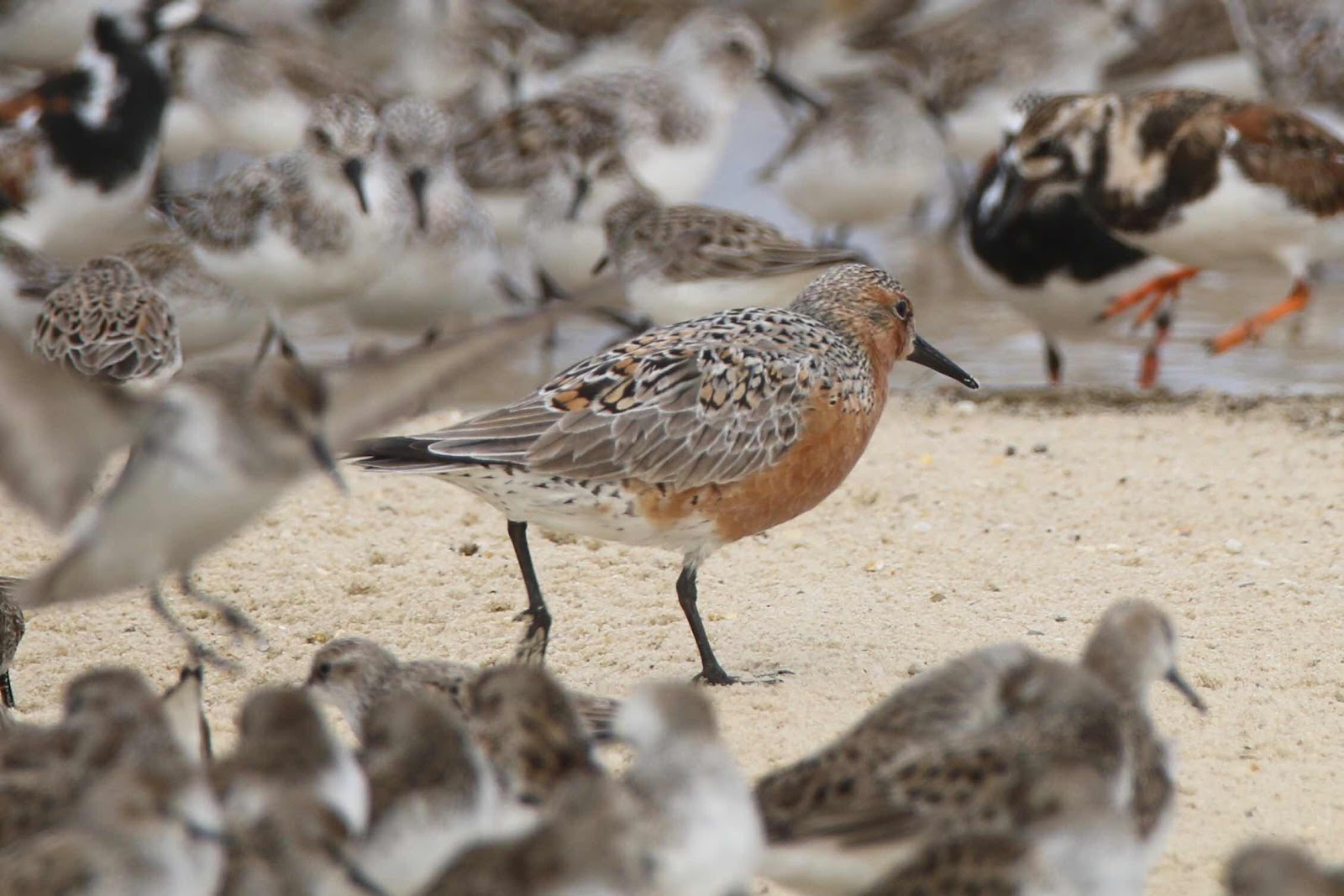 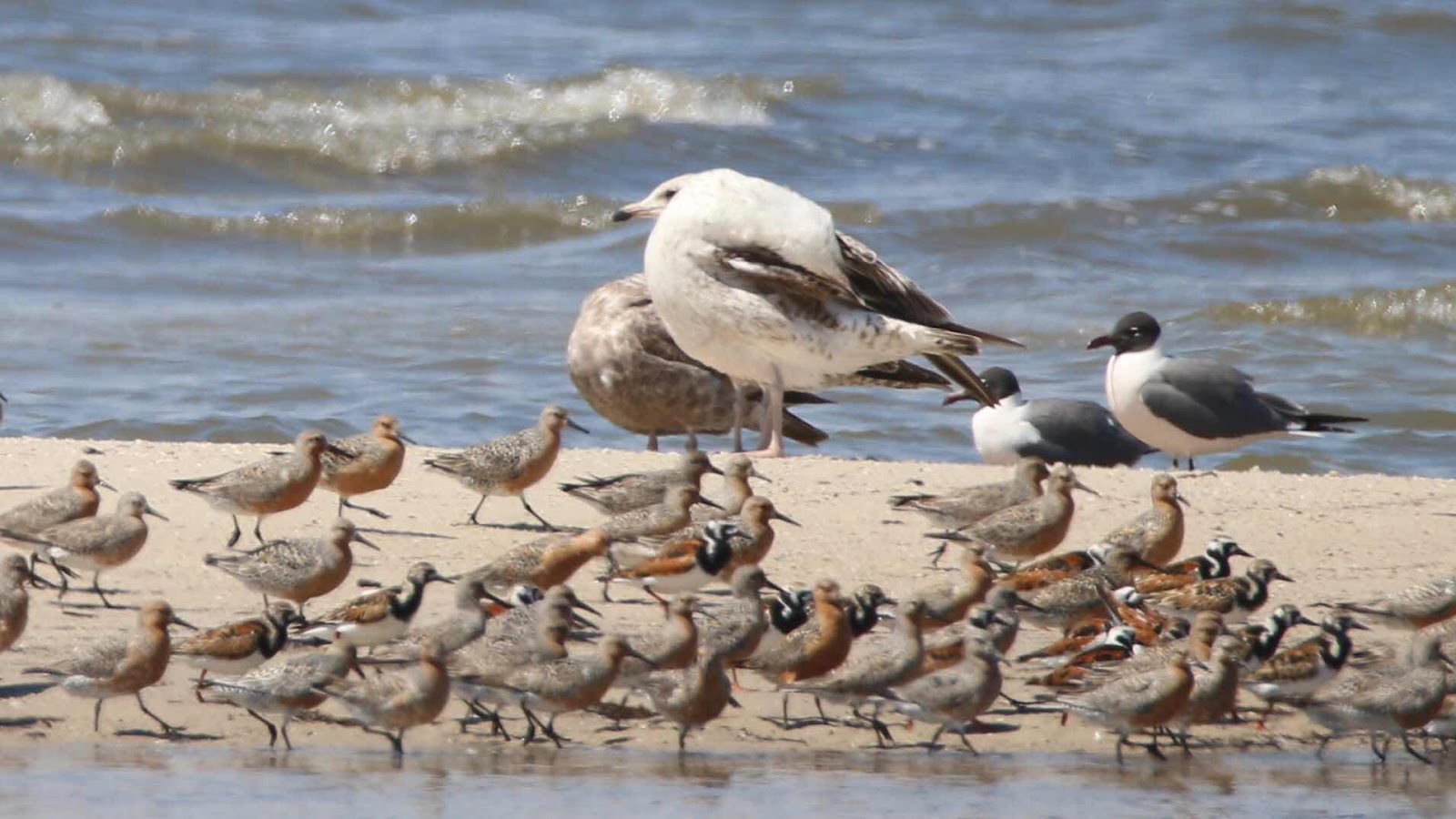 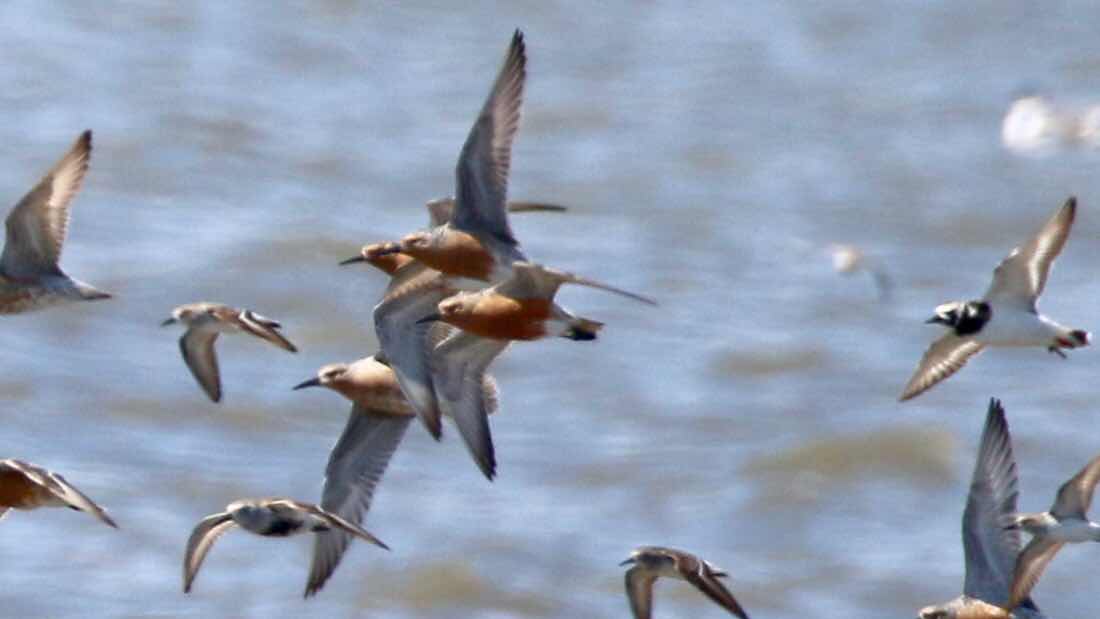 We may have been there for the Red Knots, but the Red Knots were there for the buffet of Horseshoe Crab eggs.  They fly thousands of miles from their wintering grounds in South America to the arctic regions of Canada, stopping to feed along the east coast of the United States, mostly in Delaware Bay, to double their body weight for the remainder of the journey.  By the time they reach Cape May they are emaciated and need to gorge on the crab eggs.  Because of declining populations of Horseshoe Crabs, used for fishing bait and by the pharmaceutical industry to make anti-coagulants from their blood, both populations are at risk. 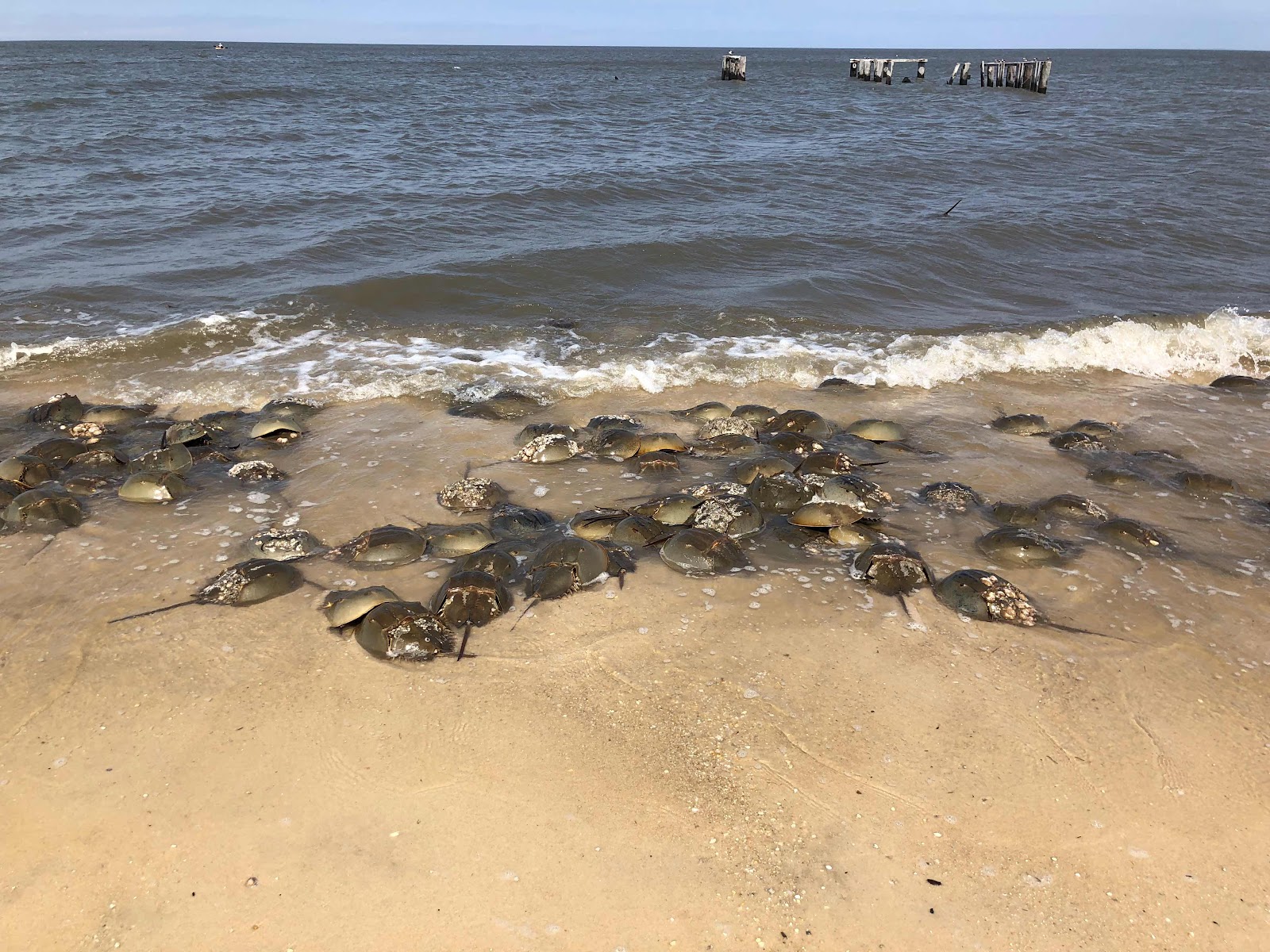 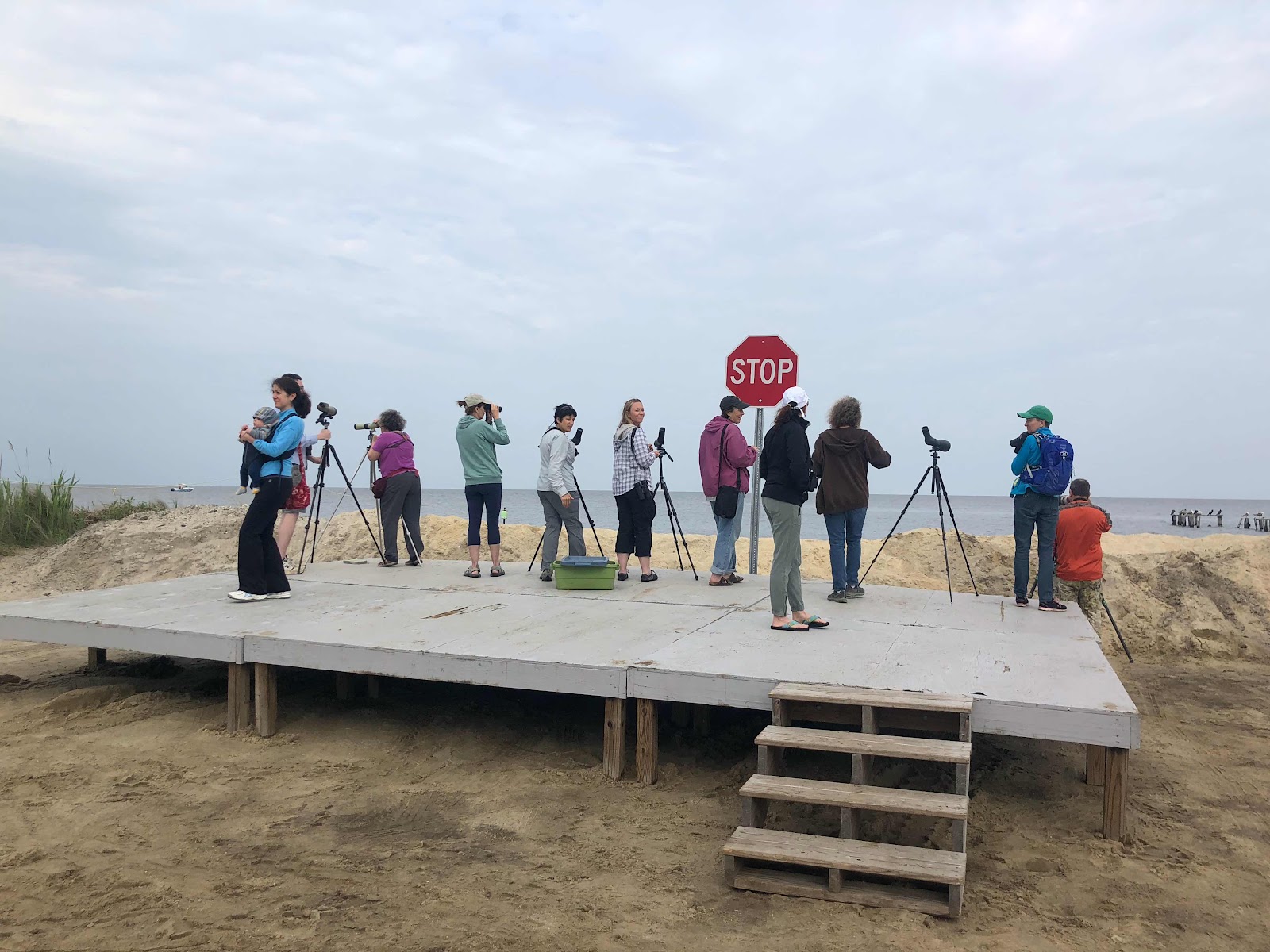 Right behind us in the fields we were able to watch Seaside Sparrows jump in and out of the long grass and every once in a while sit still upon a tall stalk: 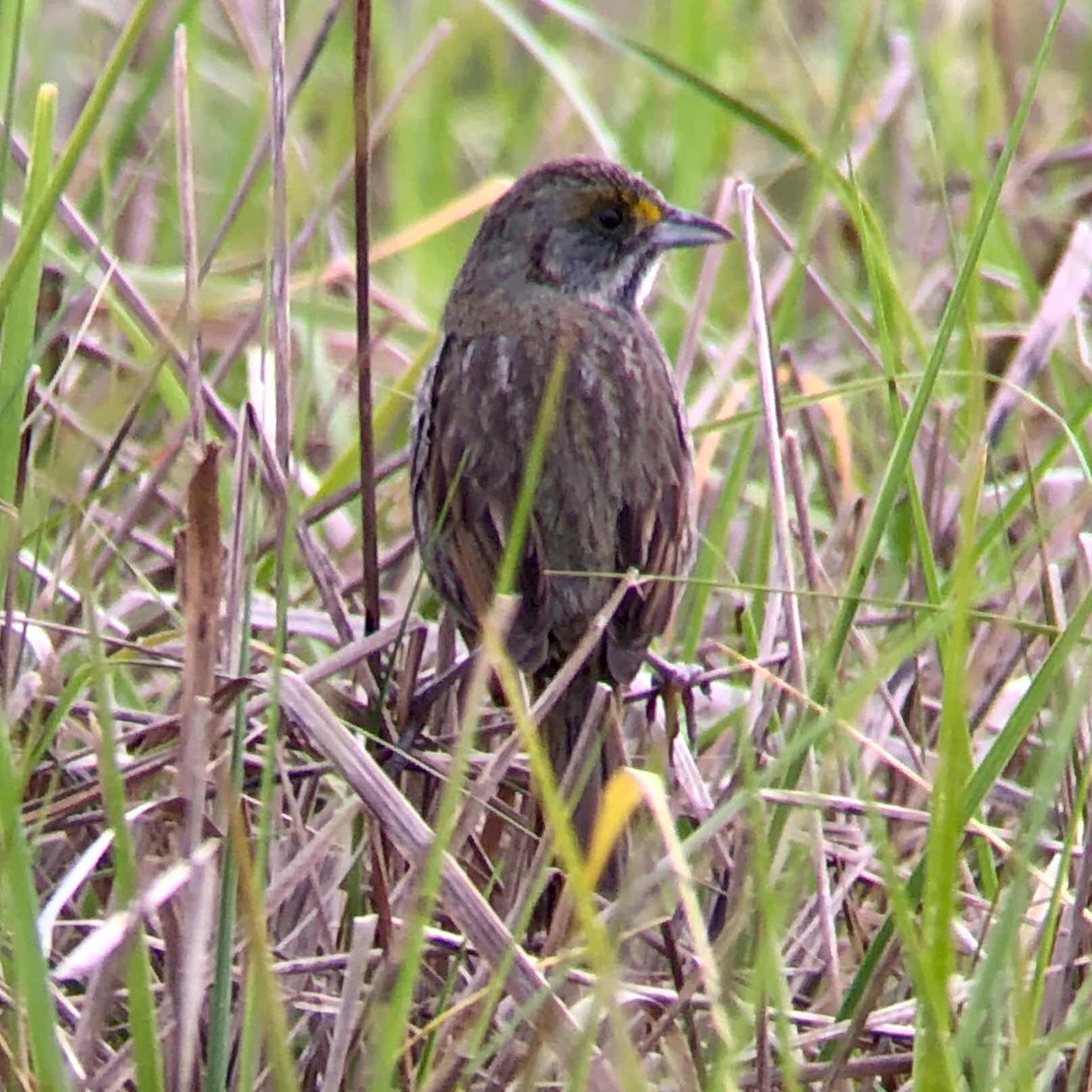 A few other Cape May birding memories: 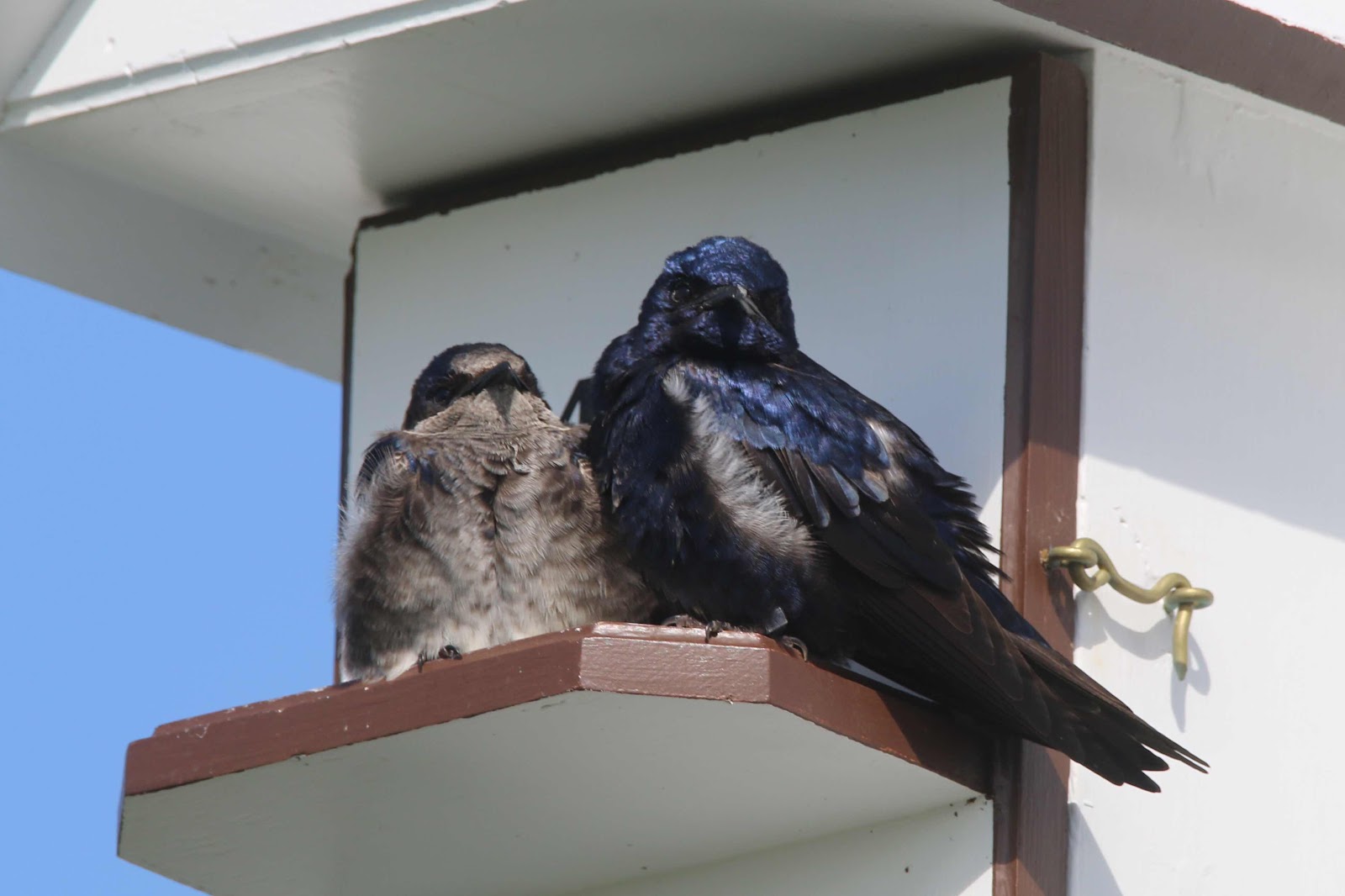 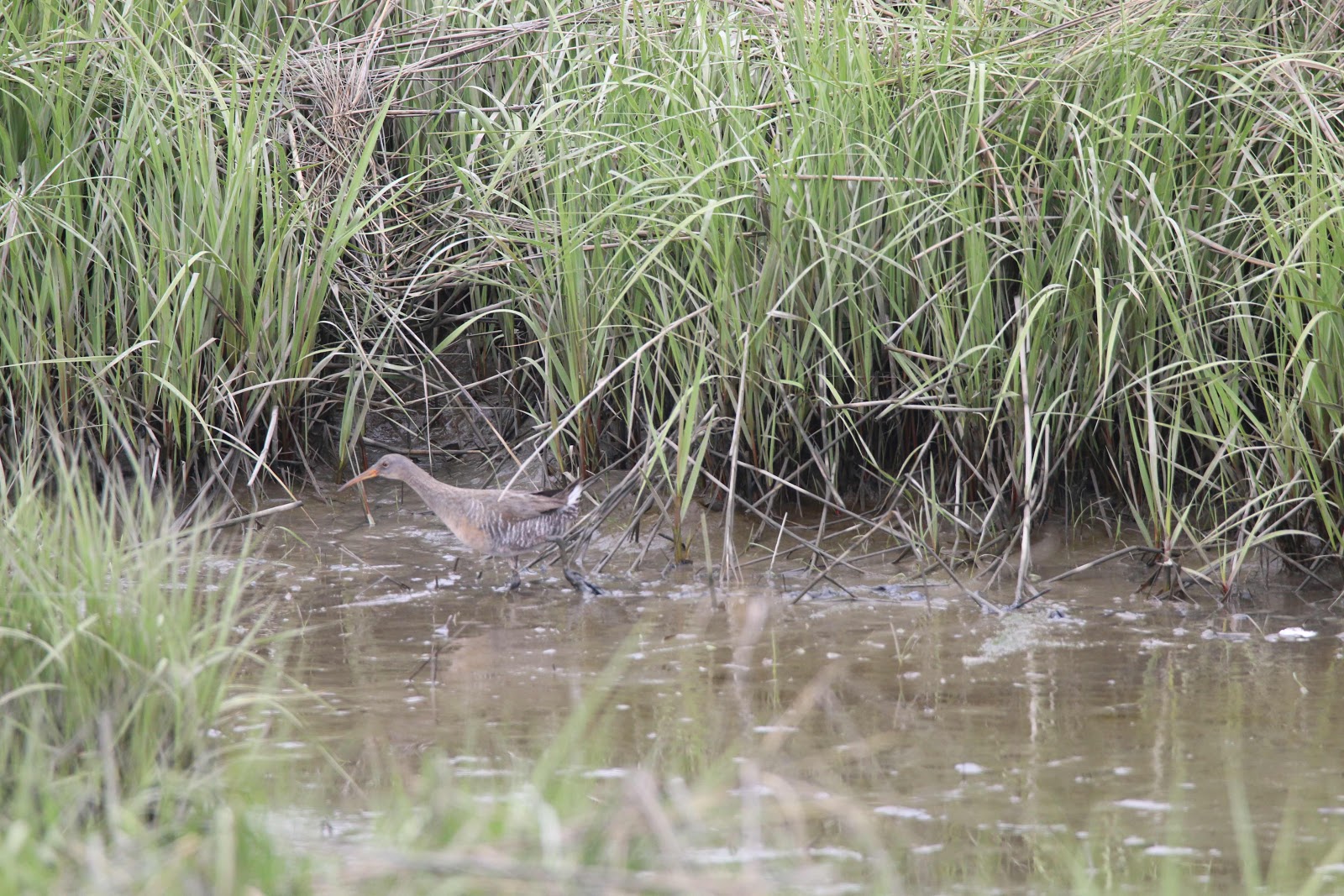 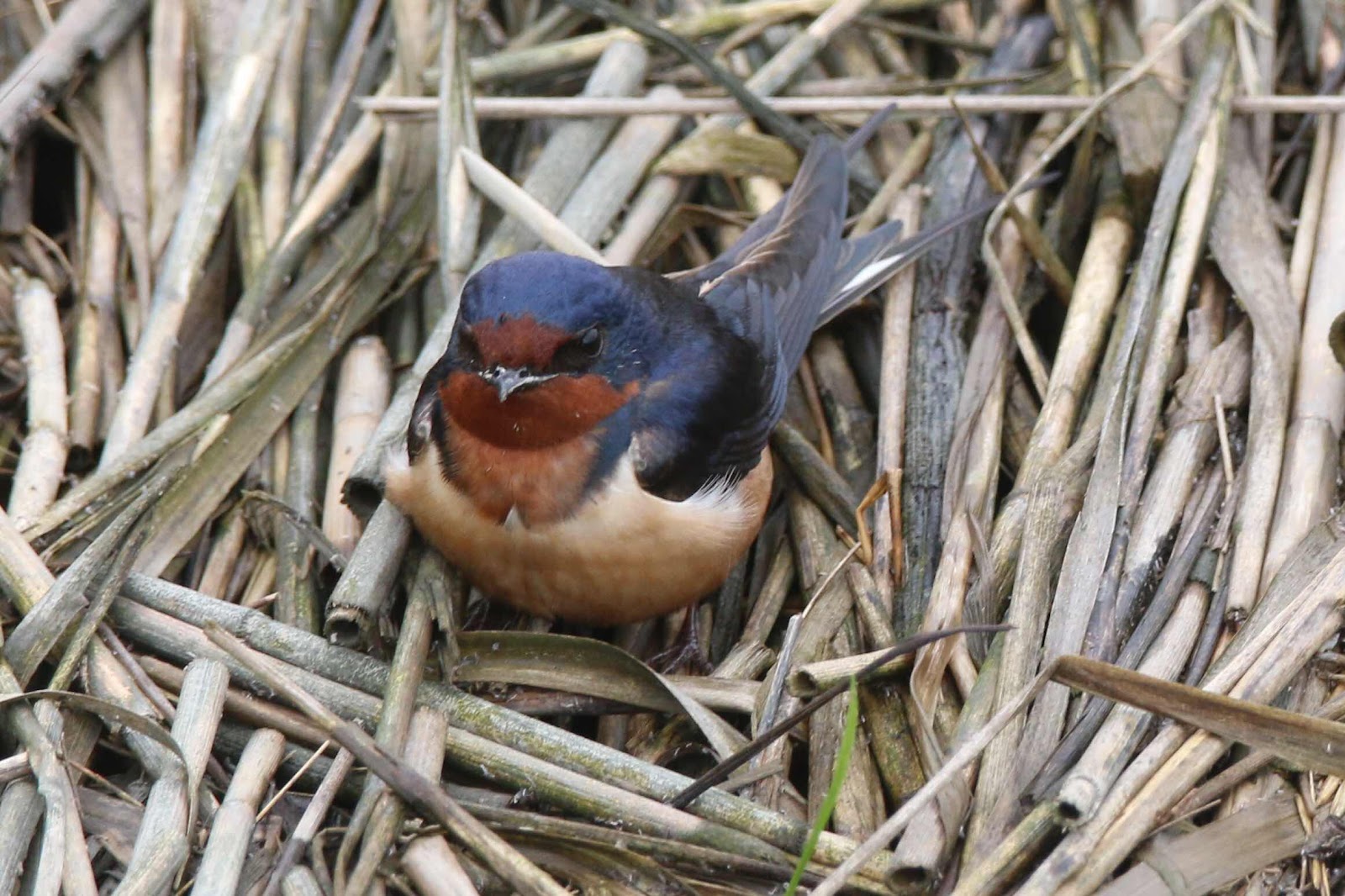 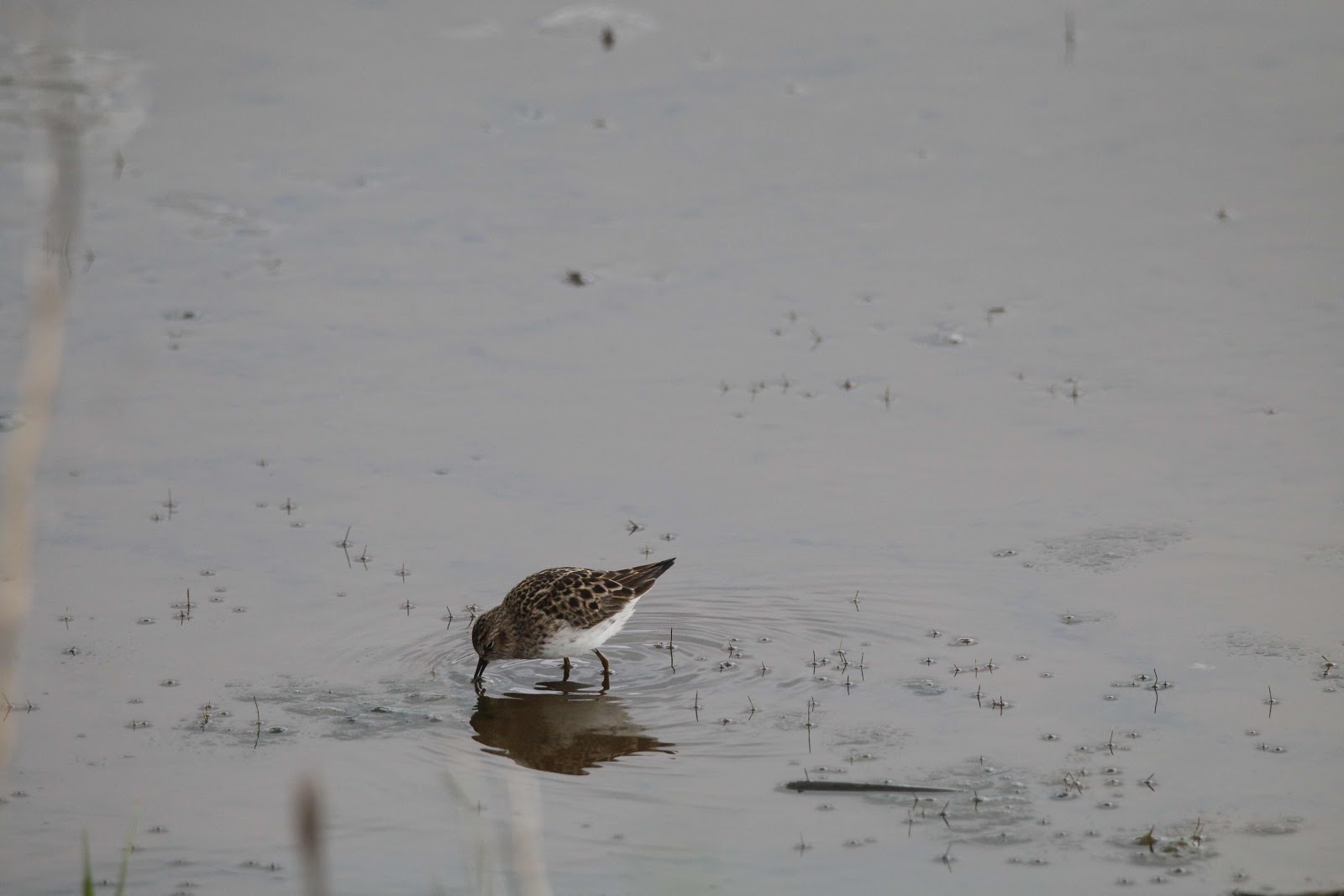 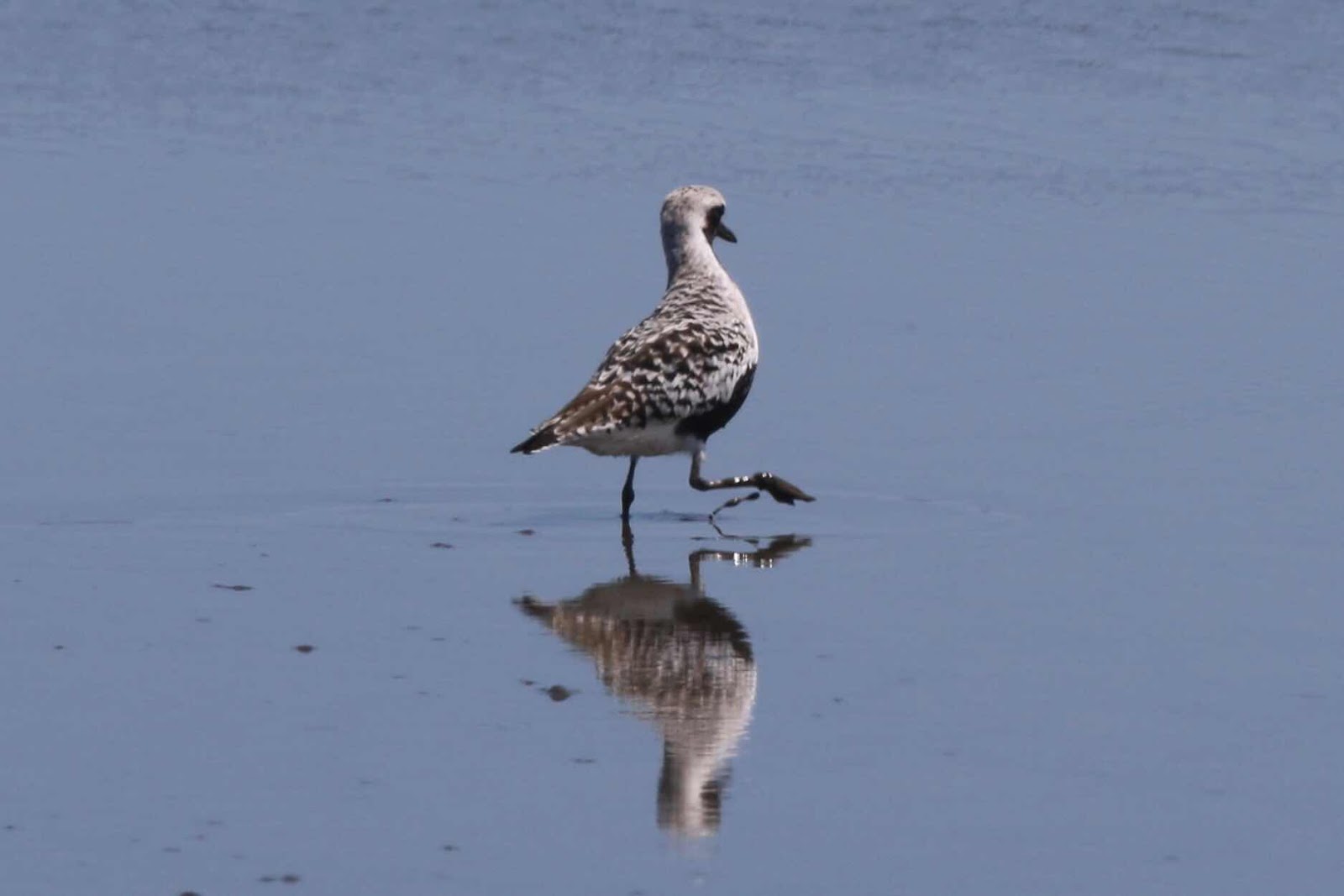 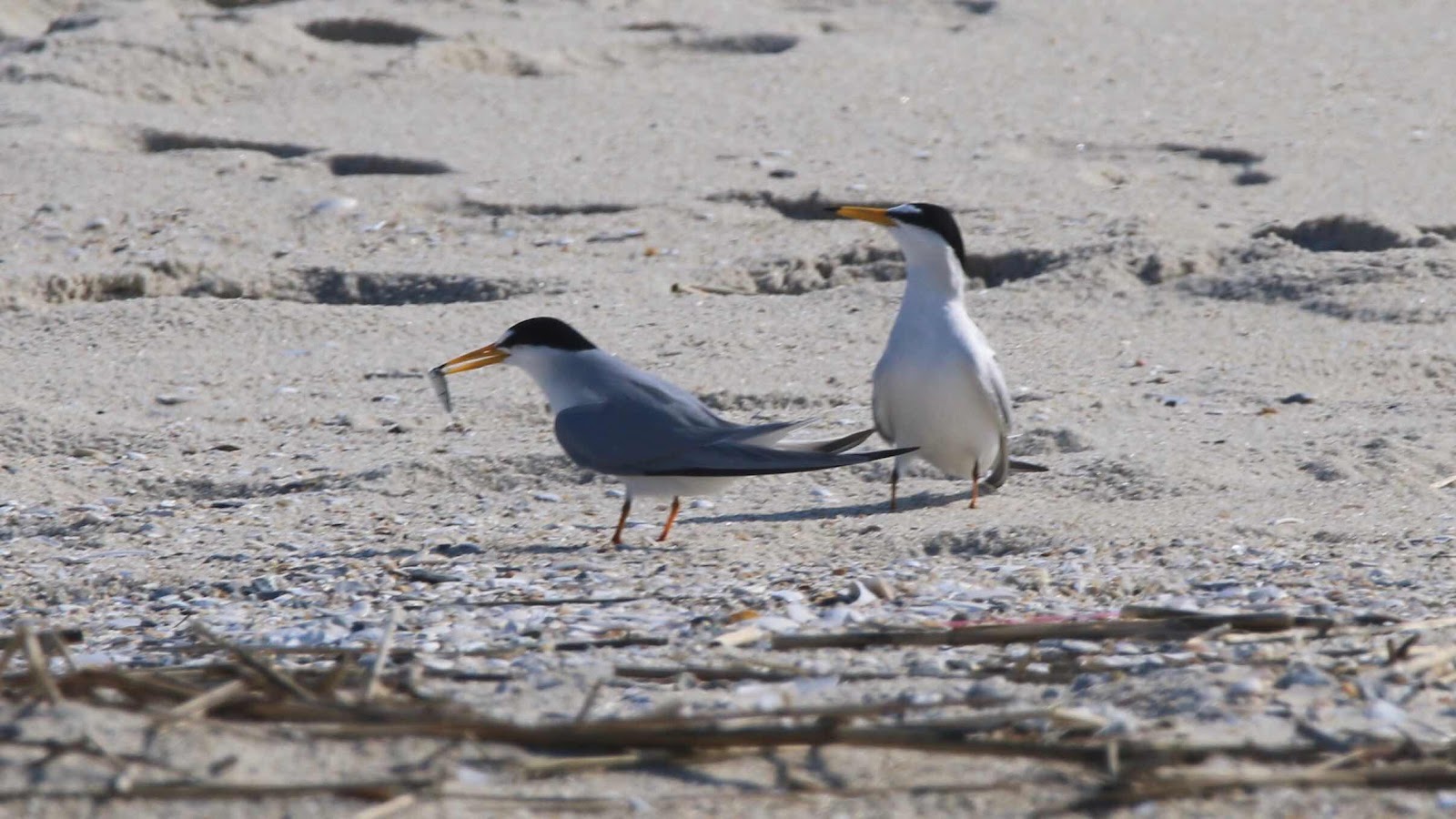 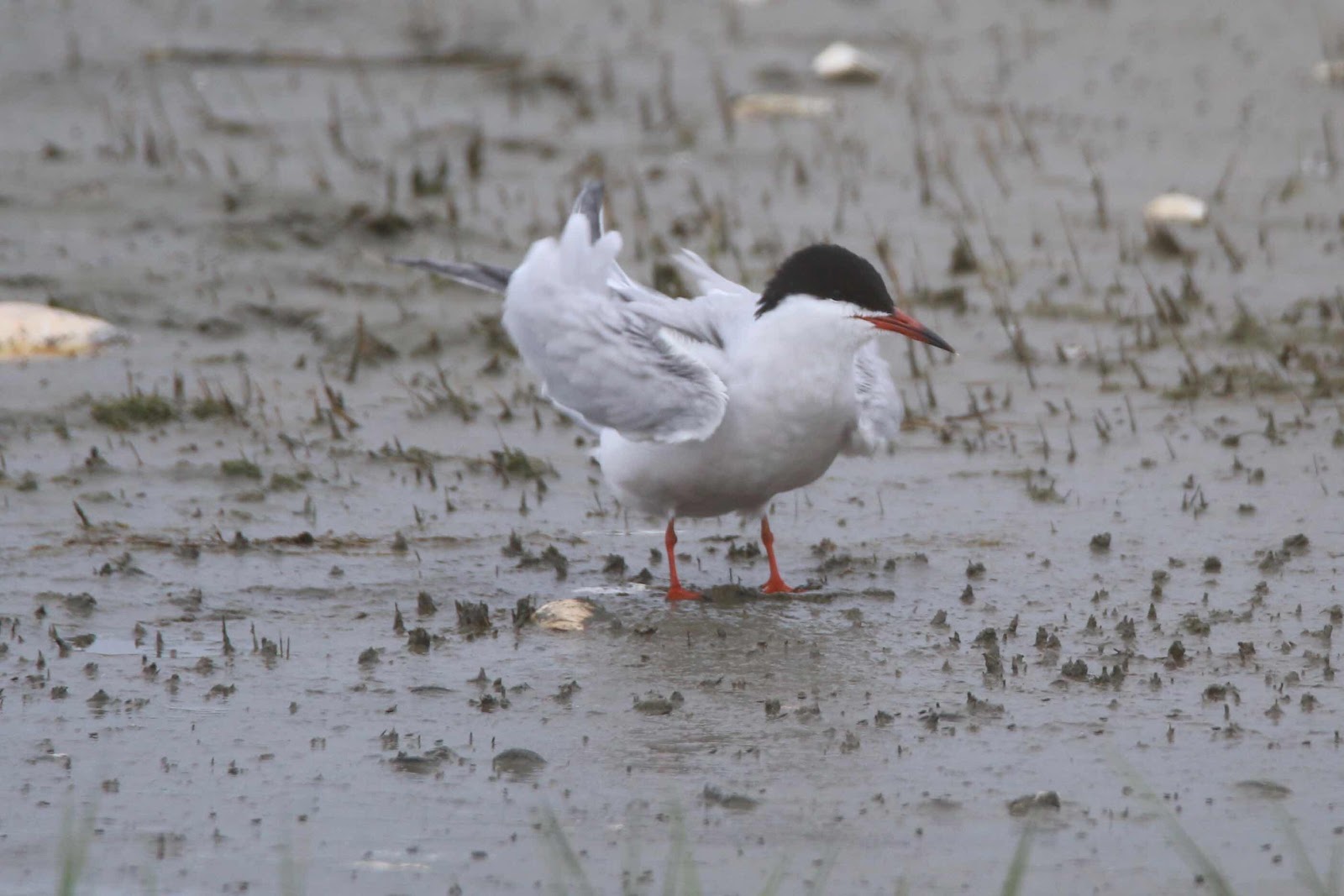 A Ruff Start to Spring Migration 2019

Literally, starting with the report of a Ruff in Luther Marsh near Grand Valley, Ontario.  I had only been back in Toronto a few days when this alert landed in my In Box via Ontbirds.  I left work a little early,(okay, a lot early), to get there and when I did it was raining pretty hard.  There was another birder there and he said that the bird had flown over a ridge but usually was coming back when the rain stopped.  Well, true to its nature, it flew back in after about a 40-minute rain delay, landing in the mudflats of a farmer's field.  My only other Ruff sighting had been in New York State, so this was a first for Ontario, number 326, the first of three Ontario Lifers I would get over the next two weeks, each more unexpected than the next. 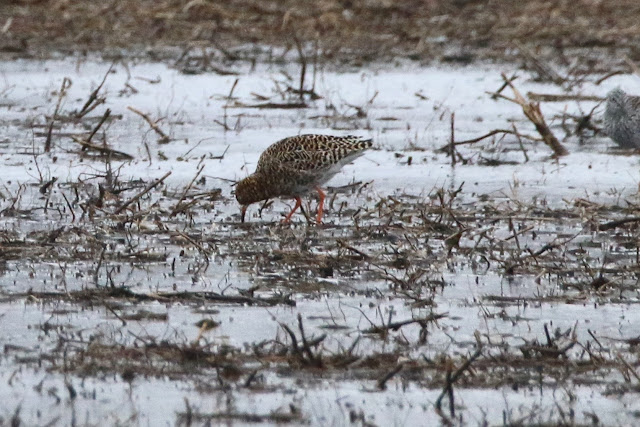 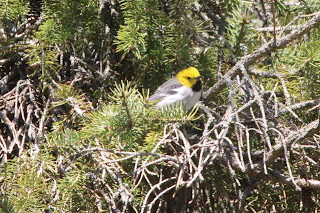 Five days later, another alert arrived, this of a Hermit Warbler.  I had only ever seen them in California, so this bird was way out of its range.  Truly should have turned left at Albuquerque on it's way up from Mexico.  His lost way was our gain as hundreds of birders visited a house near Thickson Woods in Whitby Ontario for not just an Ontario Lifer, but for most a first ever sighting. 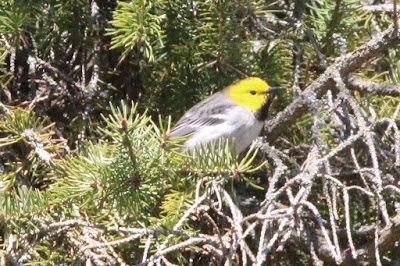 In the days in between the rare bird sightings, I was spending most of my birding time in my local spring migration patch, Colonel Samuel Smith Park here in Toronto.  Being down by Lake Ontario it is a great spot to see many of the spring migrants including most of the migrating warblers.  I was able to add a few new species to the year list, including American Woodcock, Rose-breasted Grosbeak, Blackburnian, Blackpoll, Magnolia, and Black-throated Blue and Green Warblers.  In addition, there was one morning with a "fallout" of White-throated Sparrows, in the hundreds, if not thousands.  There were also hundreds of Ruby-crowned Kinglets and dozens of Hermit Thrush. 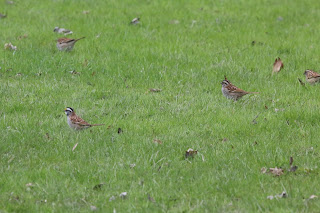 These photos just don't do justice to the number of sparrows we all saw... 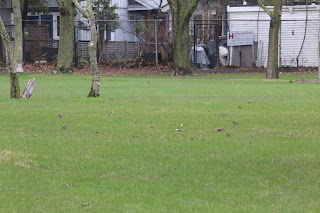 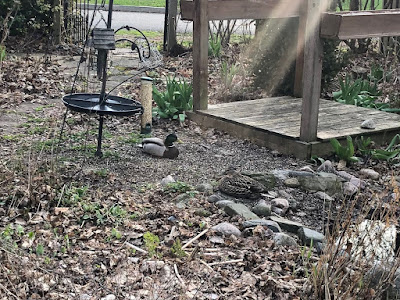 Other birds of note were the returning Malards to our backyard pond, 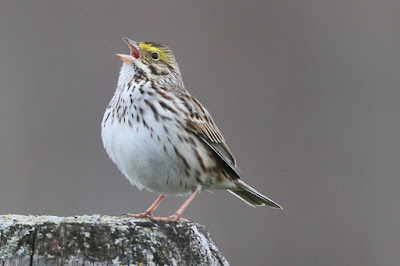 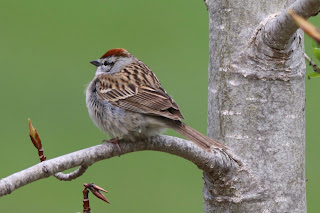 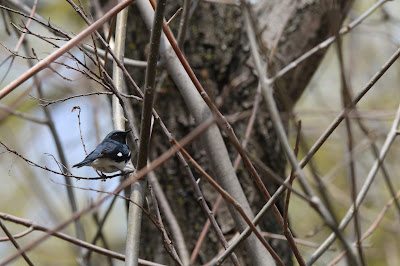 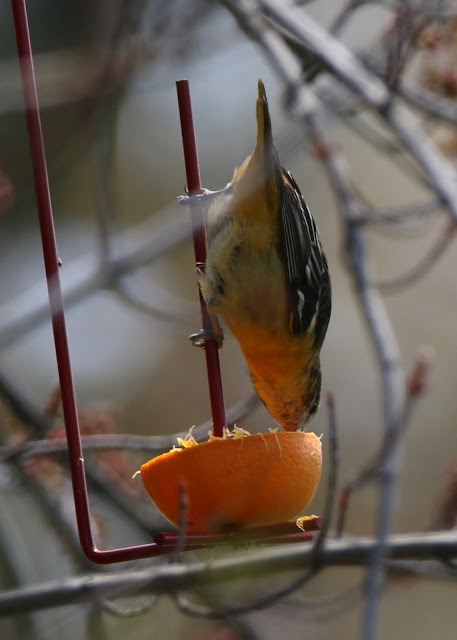 Black-throated Blue Warbler and a female Baltimore Oriole feeding on an orange.


But it was in a close-by park, Humber Bay East, that another rare bird for Ontario, a Common Gallinule showed up. Though common in Florida, I have only ever seen one other in Ontario, and never in Toronto, so I took a short drive east from Col. Sam and found it in short order.  There had also been a report of a Whip-poor-will, but that was not found.  It would have to wait for another day. 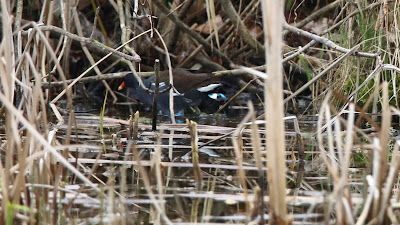 Next on the list of spring rarities was a bird I had only seen in Louisiana, the secretive Yellow Rail. It turned up, in of all places, the parking lot of a supermarket in Oakville, Ontario.  I decided to chase it, due to it being not just an Ontario Lifer, but because of the odd location.  It is a bird that can be seen, but mostly heard in certain parts of Ontario, but I just haven't had the opportunity to get one here. When I arrived at the location, it was like turning up to a kids softball game, as people were sitting at the edge of the parking lot, as if in bleacher seats, watching the bird across the laneway behind the store, as it fed at the base of a spruce tree at the rear of the loading dock.  For many, it was another Lifer, and for me it was Ontario species number 328. 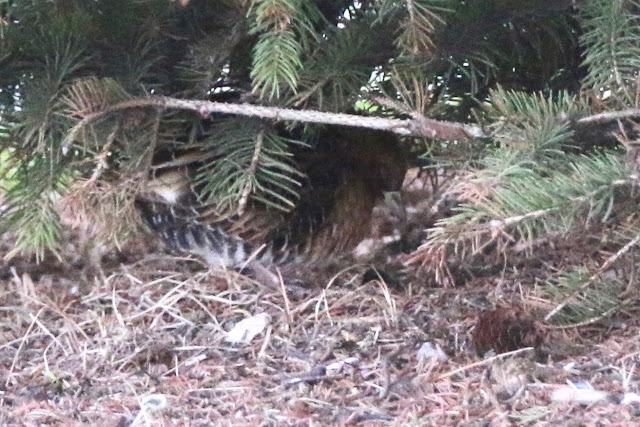 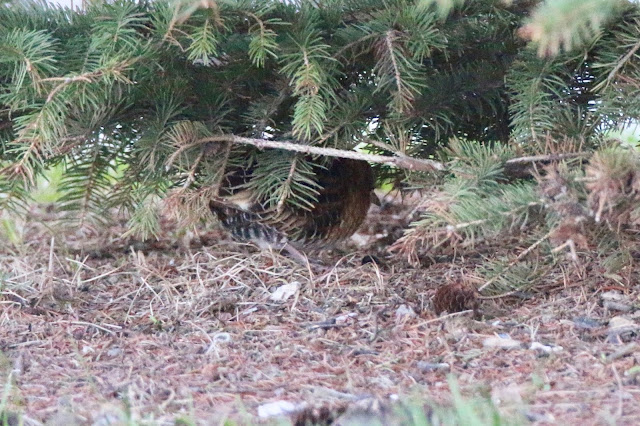 Finally as the first couple of weeks of migration are coming to a close, I was wondering if I would get any new park lifers in Col. Sam Smith Park this year.  Well, though I missed seeing a Whip-poor-will in Humber Bay, one turned up a couple of days ago in Col. Sam, bring in my park list up to 223.

And now we leave for a week of spring migration in Cape May, New Jersey and the festival of Red Knot migration!